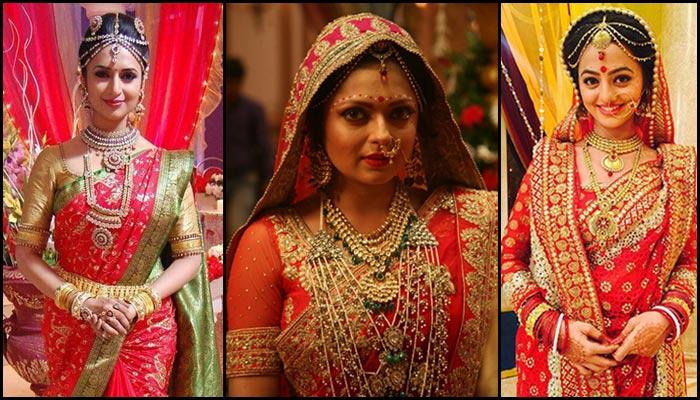 You wait every day to see them on your television set. And as they arrive on the idiot box, they take you on a roller coaster ride of emotions. Yes, you guessed it right! We are talking about the gorgeous divas of the telly world, who with their brilliant on-screen presence, have made you fall in love with them.

Sometimes they make you happy and sometimes they leave you sad. Not just that, a few of them even give you some really valuable life or relationship lessons too. All in all, they are an inspiration for you, isn’t it? Well if that is the case, then how about taking some serious dose of style inspiration from these lovely beauties for your big day?

So, check out your favourite television actresses in the bridal look that they donned in their shows.

While she rocked as a bride in real life, you can even steal an idea or two from her bridal look in her super-famous show, Yeh Hai Mohabbatein. Before her marriage in the show, Ishita Bhalla (Divyanka’s character) was named Ishita Iyer, i.e., a Tam-Brahm, and she made a truly stunning Tamilian Indian bride on her wedding day. 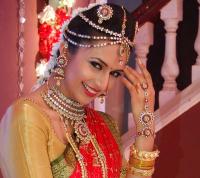 Dressed in an embroidered saree and plain golden blouse, she looked absolutely ravishing. And, we are totally crushing on the traditional jewellery, especially the sun and moon hair ornaments on her head. Not to miss the minimal makeup with only lips being highlighted with hot red lip colour! 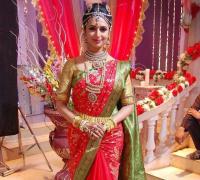 Throwback Time: Have A Look At Divyanka's Engagement To Vivek Dahiya

She is indisputably the queen of Indian television world. Drashti Dhami made a beautiful bride in her real life, but she was no less in her on-screen bridal avatars. She perfectly represented a royal bride in one of her shows, Ek Tha Raja Ek Thi Rani. Red and golden outfit teamed up with heavy jewellery made her look like a queen literally. Our favourite picks from her jewellery in this look is the long multi-layered necklace and the beautiful maang tikka.

When it came to her wedding in real, she was even better! Don't believe us? Then check out her Wedding Journey HERE!

Drashti impressed us all once again in her bridal avatar in another popular show, Madhubala. This time, her outfit was heavier than what she wore in Ek Tha Raja Ek Thi Rani. However, the jewellery was a bit understated and so was the makeup.

Sony TV’s show Kuch Toh Log Kahenge’s Dr. Nidhi aka Kritika Kamra looked drop dead gorgeous as a bride in the show. Her laal joda comprised of lehenga choli and a net jacket over it. We love the quarter sleeves in net with golden applique work on them. Pearl and kundan jewellery along with minimal makeup showed what it takes to be a modern-day bride.

The very popular show Naagin rule the charts in both its seasons. As there are a lot of things that the fans of this serial will remember, one thing that will find a place in that list of things would be the lead actress Mouni Roy’s bridal look. She looked like a million bucks in a combination of red choli and dupatta with heavy golden lehenga. Heavy kundan jewellery, smokey eyes and hot red lips just made her the hottest naagin ever! 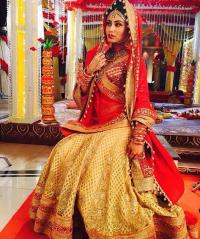 Recommended Read: Top 9 Indian TV Co-Stars Who Are Rumoured To Be Dating In Real Life

Telly world’s another hot favourite actress- Sanaya Irani too gave us some serious bridal fashion goals in two of her shows, Iss Pyaar Ko Kya Naam Doon and Rangrasiya. In Iss Pyaar Ko Kya Naam Doon, she stayed away from the traditional red or maroon, and wore pastel pink and green outfit instead. Minimal makeup and beautiful kundan jewellery was all that she needed to complete her look, and boy, she looking every bit stunning.

In Rangrasiya, Sanaya wore an extensive golden lehenga with zardozi work on it. The dupatta had a maroon border on it. This time also, she wore kundan jewellery to complete her look.

Not only on-screen look, this girl can inpire you from her real life bridal avatar too. Check TV Actress Sanaya Irani's Wedding Jewellery That Every Bride Will Fall In Love With

Radhika Madan aka Ishani became a household name because of the show Meri Aashiqui Tum Se Hi. She wooed the audience with her charming looks, brilliant acting and also with her bridal avatars that she flaunted multiple times in the show.

In one of the episodes, she was the perfect example of a minimalistic bride. She opted for light makeup and just a piece of maang teeka and a choker for jewellery. In fact, her outfit also had nothing over the top in it. She embraced double dupatta style with one being red and golden in colour and the other being a combination of white net and red border. Clad in a red and white lehenga choli, she rightly depicted a Gujarati bride.

In another episode, Radhika had a slightly heavier lehenga and a bit more jewellery. While the lehenga was quite a heavy one, she also wore a beautiful nath this time.

If you thought we are done defining Radhika’s looks as a bride in Meri Aashiqui Tum Se Hi, then wait! We’ve got more for you. Here’s one more time when Radhika got ready to take the wedding vows in the show (now keep guessing how many times she got married in the show). This time, her outfit was all about heavy embroidery and no embellishments. Like always, the naturally beautiful girl did not go for heavy makeup even this time.

One of the lead characters of the popular Colors TV’s show, Swaragini, Tejaswi Wayangankar aka Ragini too got to dress up as a bride quite a lot of times. We picked up two of her looks where she was dressed up as a traditional Marwari bride. Looks like heavy red outfits as well as heavy jewellery is what it takes to complete the look of a Marwari bride, and we are totally in love with that, aren’t you?

Tejaswi’s on-screen sister, i.e., Swaragini’s Swara also followed her sister’s footsteps and got married more than once in the show. Following is her look as a beautiful Bengali bride: 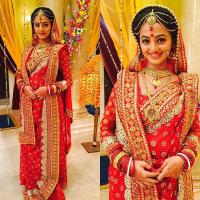 And, we leave it up to you to decide whether she looked better as a Bong bride or as a Marwari bride (see picture below): 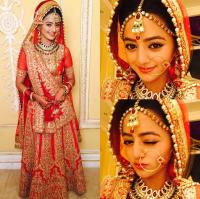 Recommended Read: Steal The Look- 6 Colour Coordinated Couples On Their Wedding Day Will Leave You Spellbound

Be it on-screen or in reality, celeb brides have always been a big source of inspiration for Indian girls, right? And, we hope these lovely ladies too helped you out in deciding your perfect look for your big day!