Soha Ali Khan shared an adorable picture of her daughter, Inaaya Naumi Kemmu, which proved that she is an avid reader just like her 'mama', Saif Ali Khan.

A child learns things from the people around him and imitates the things that his elders do. So, every parent tries to develop such an environment that their kids learn the best things and inculcate the best habits. And just like that, Soha Ali Khan and Kunal Kemmu's daughter, Inaaya Naumi Kemmu has also inculcated the habit of reading books from her mama, Saif Ali Khan, and here is the proof.

Kunal Kemmu and Soha Ali Khan's lives had changed for the best when they had hopped on to parenthood with the arrival of their sunshine, Inaaya Naumi Kemmu. It was on September 29, 2017, when they had welcomed their baby girl, and since she was born on the ninth day of Navratri, the star parents had decided to keep Naumi as her middle name.

Recommended read: Saira Banu To Step Out For The First Time After Dilip Kumar's Death On His 99th Birth Anniversary 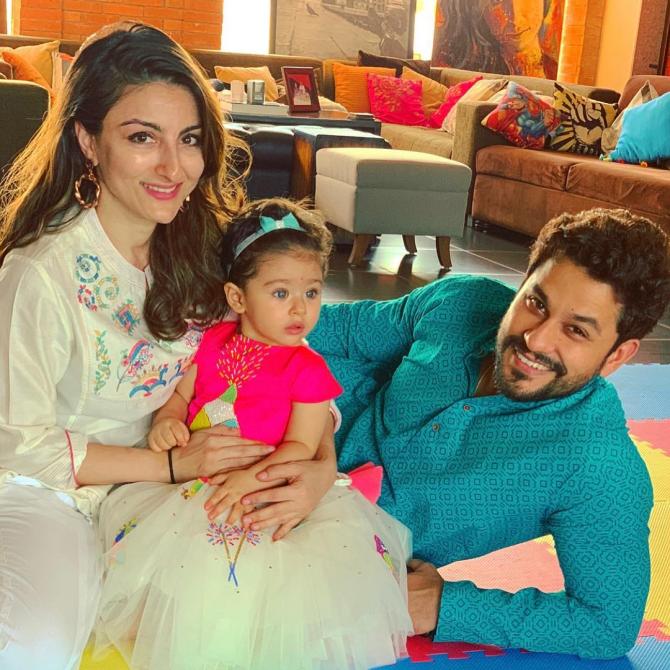 A few moments back, Soha Ali Khan shared an adorable picture of her daughter, Inaaya Naumi Kemmu reading a story book titled, Beauty And The Beast. In the picture, Inaaya can be seen sitting in an aeroplane indulged in a reading session. She looked cute in a pink-coloured top and a mask on her face. The two chotis and a beautiful clip on her hair were missable! On the other hand, Inaaya's anni, Saba Ali Khan also shared a glimpse of story time with her little munchkin on her IG handle. In the picture, Inaaya can be seen in a sky-blue coloured frock with her hair tied in a ponytail, sitting patiently with Saba Ali Khan. Sharing the adorable pictures, Saba wrote:

Well, just like her mama, Saif Ali Khan, Inaaya seems to be an avid reader. Sometime back, Kunal Kemmu had also posted a picture from his story-telling time with his little angel, Inaaya Naumi Kemmu. But it was his caption that had made us blurt out a big ‘awww’ for the father-daughter duo. Kunal had captioned it as:

“The stories you tell me are so much more fun than the ones I read to you”, followed by a heart emoticon.

A few months back, Soha Ali Khan had revealed how her daughter, Inaaya Naumi Kemmu was ‘booked’ for the entire week. From Rooster Raga, Storm In The Garden, Of I Could Teach My Teach, Soda and Bonda to What's Neema Eating Today?, Soha had given a glimpse of Inaaya being spoilt for choices in the magical world of stories. Sharing a picture, Soha had written: On December 10, 2021, Kunal Kemmu had taken to his Instagram handle and had shared a series of pictures featuring him, his wife, Soha Ali Khan, and their little munchkin, Inaaya Naumi Kemmu. In the pictures, we could see the family of three having a fun time in their garden at the Pataudi Palace. Sharing the pictures, he had written:

"Wondering who the adult is."

We are in love with Inaaya's adorable pictures!