With an age gap of close to nine months, Taimur Ali Khan and Inaaya Naumi Kemmu share an adorable bond that is evident in their pictures and videos. This cousin duo has been stealing our hearts, again and again, with their cuteness. It is always a treat to see Taimur and Inaaya in one frame, and thanks to Kareena Kapoor Khan, Soha Ali Khan and Kunal Kemmu, we frequently get glimpses of the little ones' shenanigans. In February 2021 came a new addition to this cousin duo when Saif Ali Khan and Kareena welcomed their second child. Though the Khan-Pataudi family has kept the newborn away from the media glare, fans are waiting with bated breath to see the little one with Taimur and Inaaya in one frame.

When Kareena Kapoor Khan had delivered her second child at Breach Candy Hospital on February 2021, the big brother, Taimur Ali Khan had visited his amma and newborn sibling. Randhir Kapoor, in an interview with ETimes, was asked if Kareena and Saif Ali Khan’s newborn son resembles his amma or abba. To which, he had replied that every child looks the same to him but everybody else is saying that the newborn resembles his brother, Taimur. Revealing if Taimur danced on the arrival of his younger brother, Randhir had continued, "He's too young to do so much." Close to two months after the birth of Saif Ali Khan and Kareena Kapoor Khan's second child, Kunal Kemmu spoke about how Taimur Ali Khan and Inaaya Naumi Kemmu reacted to the new addition. Revealing the same, Kunal said in an interview with ETimes, "Be it Taimur or Inaaya, I think most of their reactions are based on how we react. Having said that, the kids are happy and blessed to have a new member in the family. He was born in unprecedented times, and I wish him good health." Soha Ali Khan, Kunal Kemmu and Inaaya Naumi Kemmu had celebrated Holi 2021 with Kareena Kapoor Khan, Saif Ali Khan, Taimur Ali Khan and the newborn at their new residence. Soha, Kunal and Kareena had posted pictures of the cousin duo, Taimur and Inaaya, enjoying the festival with the splash. In 2020, Kunal had posted a picture with Taimur and Inaaya, in which, he could be seen holding a plate filled with colours for the little ones as they were all set to celebrate the festival of Holi. Revealing that it was after 12 years that he was playing Holi, Kunal had written, "Thank you children for bringing back the joys and colour and making me feel like a child once again. I haven’t played holi in the last 12 years and I thought I never would but thanks to inaaya I did go to her friends holi party and ended up having so much fun. Happy Holi everyone. Wishing all of you health happiness and a life filled with colours." Sometime back, Kareena Kapoor Khan had delighted the Pataudi fans with a super a-maize-ing picture of the two adorable munchkins of their house, Taimur Ali Khan and Inaaya Naumi Kemmu. In what seemed like a picture taken after the pool session, Taimur and Inaaya were dressed in white robes and in the background, we could spot Saif Ali Khan and Kunal Kemmu indulged in a conversation. Kareena had captioned the picture as "Aren't they just a-maize-ing? #TimAndInni PS: Well, the boys in the back aren't too bad either." When Inaaya Naumi Kemmu had turned 3 on September 29, 2020, her doting mami, Kareena Kapoor Khan had wished her by posting a lovely picture. Kareena had posted an adorable click of Inaaya, reading a storybook to her elder brother, Taimur Ali Khan and had captioned it as “Happy birthday our beautiful Innaya.” And on Taimur's fourth birthday in December 2020, Soha Ali Khan had posted pictures of him with Inaaya, which were adorable beyond words and had captioned it as "Happy birthday Tim Tim My big brother - four today and for always @kareenakapoorkhan." 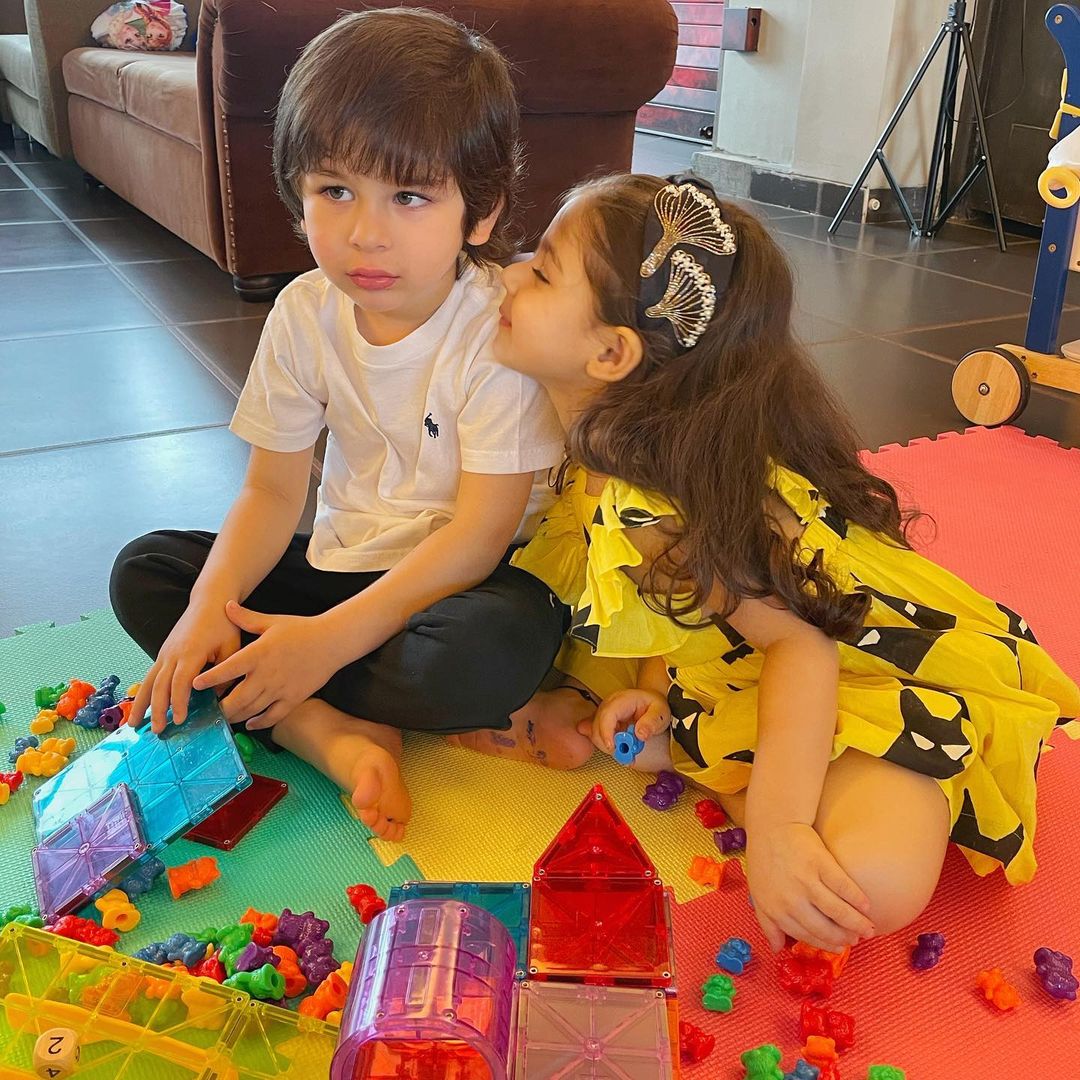 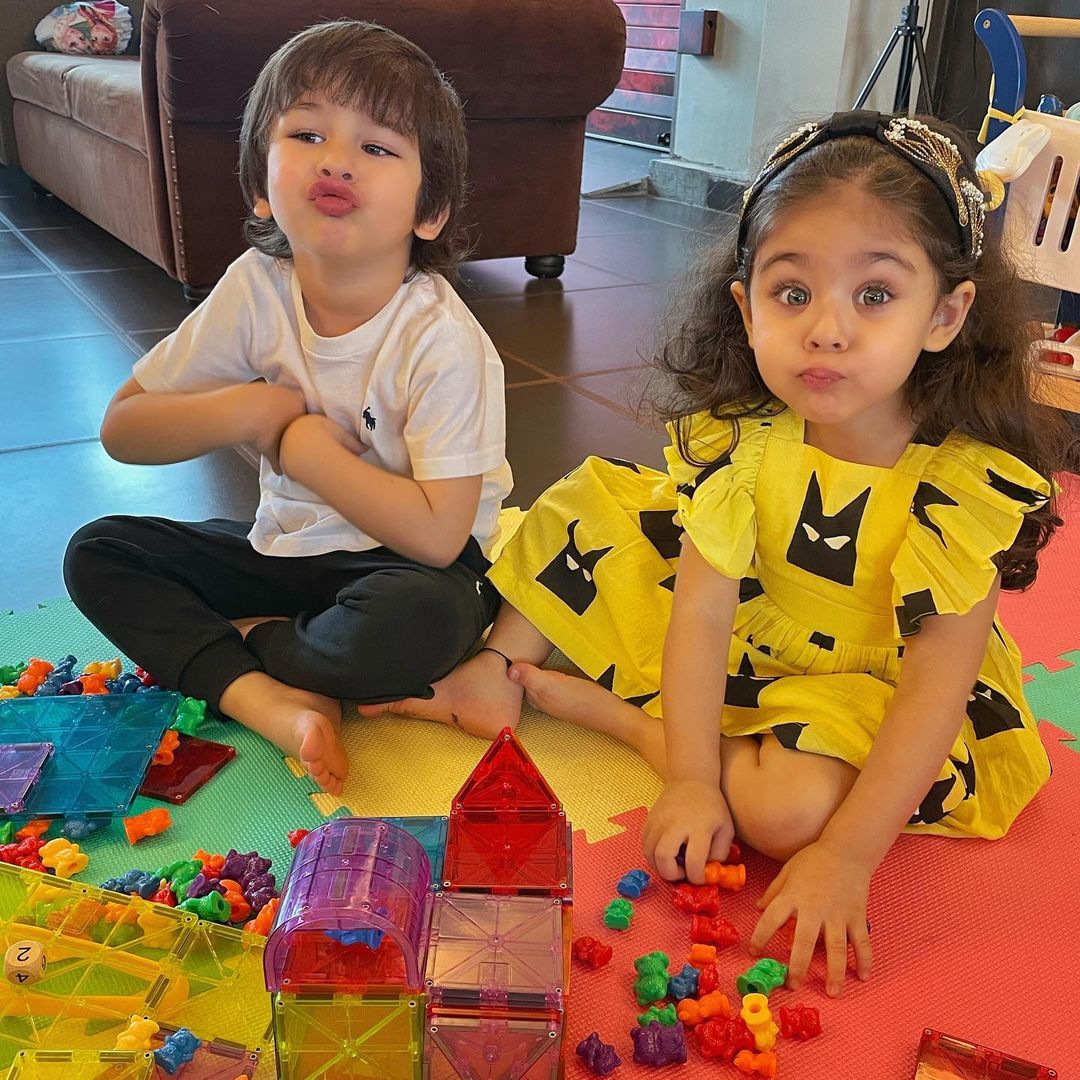 We can't wait to see Taimur and Inaaya, bonding with the newborn addition in their gang!