Whenever we see Inaaya Naumi Kemmu, our day just gets merrier and what better than to see her enjoying her weekend with full swing. Inaaya tried her hands in painting and looked super adorable. Sometimes when we look at little munchkins playing in the garden and trying their hands-on different things, we can’t stop ourselves from thinking that time does fly in the blink of an eye. Sometimes, a couple fails to understand where the time ran as it seems yesterday when they had held their little munchkin in their arms. It is a blissful feeling for a couple to see their little one growing, but sometimes they wish to hold on to time and enjoy the childhood of their child as much as possible. From the very first moment when you see your little one to getting him/her ready for playschool, everything feels surreal to a couple. We capture every moment so that it can be cherished for lifelong and when your little one gets older, you can show the memories to him/her. (Recommended Read: Arjun Kapoor Took A Trip Down The Memory Lane To Wish His Late Mother, Mona On Her 56th Birthday)

It was on September 29, 2017, when Soha Ali Khan and Kunal Kemmu had given us an adorable surprise and had announced the arrival of their little angel, Inaaya Naumi Kemmu. The grey-eyed munchkin from her very first glimpse took our hearts away and we still can’t stop ourselves from drooling over her picture. Soha and Kunal understand the craze of fans and followers for Inaaya and to make our days merrier, they time and again share adorable pictures and videos of her. Inaaya has already won millions of hearts with the frown on her forehead, dimpled chin and messy hairdos. We have always spotted Soha accompanying her little angel to events and birthday parties and is always protective about her. Soha and Kunal have never shied away from sharing pictures and videos of their little angel, Inaaya and in various interviews and media interactions have shared how blessed they feel to have Inaaya in their lives. 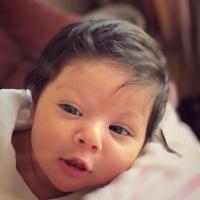 After a hectic week, we all wait for the weekend so that we can just sit at home and relax with our loved ones. Sitting at home ideally, sipping a cup of hot tea and watching your little munchkin playing and enjoying his/her time to the fullest makes your weekend even more blissful and the same thing happened with Soha Ali Khan. On Sunday (February 2, 2020), Soha took to her Insta stories and shared a glimpse of little Inaaya trying her hands at painting and it just made the last day of the weekend blissful. In the picture, we could see Inaaya’s hands filled with paints and colours spread around her. Though we could only see Inaaya’s back in the picture her messy hairdo made us believe that she had a blast while painting. 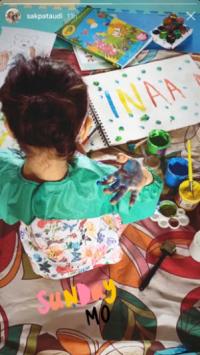 It is not only Soha Ali Khan, who loves spending quality time with her daughter, Inaaya Naumi Kemmu, her husband, Kunal Kemmu also loves pampering his little girl. On February 1, 2020, Soha had taken to her Instagram handle and had shared an adorable video, in which we could see Kunal and Inaaya engrossed in a conversation in their own ‘father-daughter’ language. While Kunal and Inaaya indulged in their deep conversation, Soha had recorded the moment and had shared it with us. Sharing the video, Soha had written, “Fathers and daughters really do speak a language all of their own (this is just a snippet) @khemster2.” (Suggested Read: Genelia Deshmukh Wishes Her 'Forever' Riteish Deshmukh On 8th Anniversary, Makes A Beautiful Promise)

In an interview with the Hindustan Times, Soha Ali Khan had talked about embracing motherhood and had said, “I am the youngest in my family, I have never been responsible for anyone else, I’ve never had to look after anyone, I have never changed a diaper or fed someone or made someone sleep or been around someone so vulnerable. So, it really is a life-changing experience. It can be challenging and exhausting to watch after someone all the time, but you know that’s life. You have to understand that life is different now and it will never be the same. Even if I know someone responsible is looking after her, I want to be there. But you have to let go, you know literally cutting that umbilical cord has to happen. The faster you accept that and trust other responsible people around your child, the easier and better it will be for you." When Inaaya was born, Kunal nearly couldn’t step out of his house as he wanted to spend all his time with his little angel. In an interview with the Asian Age, he had revealed, "If I wasn’t promoting Golmaal Again, I don’t think anything could have pulled me out of the house. But luckily Innaya spends a lot of time sleeping, so I keep constantly checking on her. It’s a great phase. I’m excited to see the phase where she’ll be more reactive." In an interview with Rediff.com, Kunal had talked about embracing the journey of fatherhood. He had said, "Life has completely changed from what it used to be. My body clock is changing, my timetable is changing, my priorities are changing and it’s all worth it because I love being Inaaya’s father and I love her."

In an interview with the DNA, Kunal had shared the story behind his baby girl's name and had stated, "It’s weird. It just came to me. When you know you are having a baby, the first thing is you think about the names you can call your baby. Everyone goes through this and we also had a list. Inaaya just happened to strike me. I had never heard the name before, but I must have had some connection with it, and everyone quite liked the name. But it was one of the names I had chosen. Naumi was another name that I really liked. And my daughter has a middle name too. We were going with Inaaya but then, she was born on Mahanavami, so this was too much of a coincidence. Even though she will always be known as Inaaya, her official name will be Inaaya Naumi Kemmu." (Must Read: Radhika Pandit Shares A Throwback Video Of Her Little Munchkin, Ayra's 'Nail Cutting Session') How did you spend your weekend? Keep us posted. 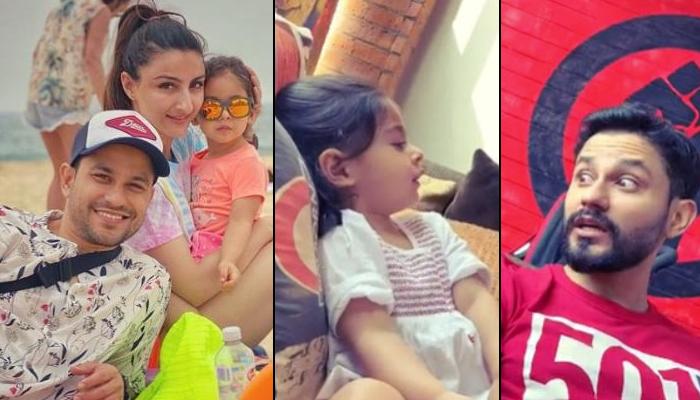