Neetu Kapoor shared the poster of her future 'bahu', Alia Bhatt's striking pose in her film, 'Gangubai Kathiawadi' and lauded her with the coolest caption. Check out!

Alia Bhatt's latest movie, Gangubai Kathiawadi, directed by Sanjay Leela Bhansali, has hit the theatres on February 25, 2022. And it's garnering a colossal love and response from Alia's huge fanbase, starting from its teaser to songs, film premiere, to finally its release. But what has caught our attention is Alia's future mom-in-law and Ranbir Kapoor's mother, Neetu Kapoor's praises for her future bahu's performances. For the unversed, if media reports are to be believed, the most adored couple, Alia and Ranbir, would tie the knot in 2022.

Alia Bhatt shares a beautiful bond with Ranbir Kapoor's family members as she often gets spotted for family lunch or dinner get-togethers. On February 10, 2022, Alia Bhatt had shared the first song from the film, Gangubai Kathiawadi, Dholida. And her beau, Ranbir's mother, Neetu and his sister, Riddhima Kapoor Sahani, had dropped in her comment section and lauded her with a series of clapping emojis.

Next Read: Kareena Kapoor's Walk-In Closet Made Of Mirrors, Gives A Glimpse Of Her Shoes And Bag Collection

A few hours ago, Neetu Kapoor took to her IG stories and lauded her future bahu, Alia Bhatt's stellar acting skills. She shared the poster of Alia's latest released film, Gangubai Kathiawadi, featuring the young actress from one of the striking sitting pose from the film. Neetu praised her for playing the role of 'Gangubai Kathiawadi' in the movie, giving absolute justice to the character. The impressed future saasu maa wrote in the caption:

"Watch how @aliaabhatt hits the ball out of the park." 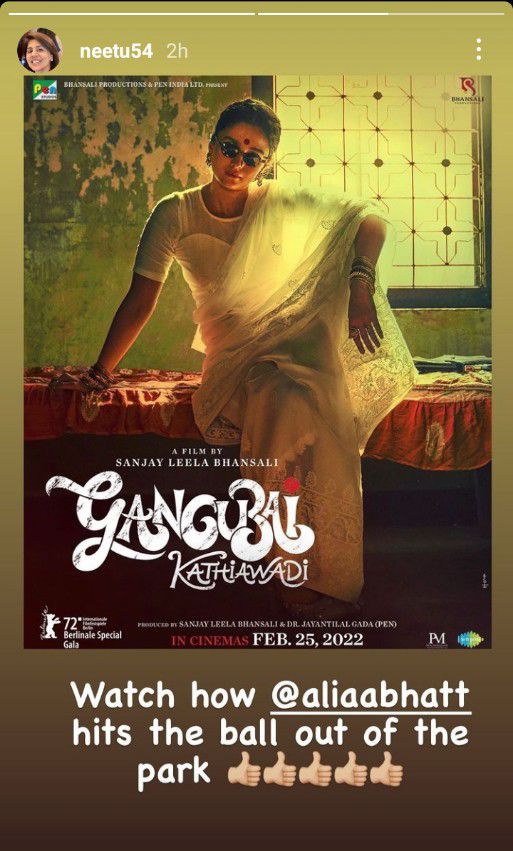 As soon as Neetu Kapoor praised Alia Bhatt, the doting future daughter-in-law, took to her IG stories and reshared Neetu's post. Alia, who also knows how to shower love and give value to all of her relations penned a sweet note along with two heart emojis atop it. Her cute response can be read as: 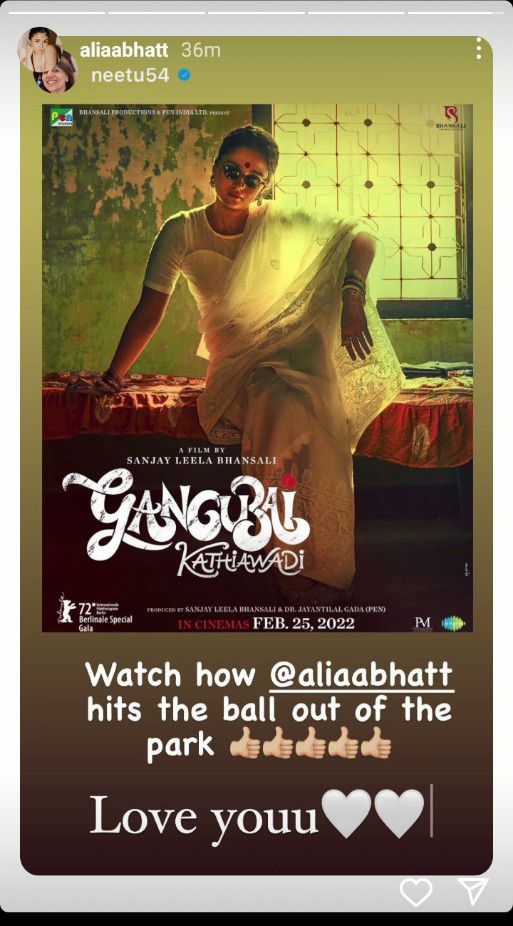 On February 11, 2022, Alia had taken to her IG handle and had shared a series of pictures, wearing a pristine white-coloured saree with yellow floral motif print and a golden border. She had completed her look with a plunging V-necklined blouse and a set of oxidised jhumkas. As soon as she had shared the pictures on her Instagram handle, her soon-to-be saasu maa, Neetu Kapoor, couldn't stop herself from praising her. She had dropped in her comment section and had written:

"Beautiful (with a heart-eyed emoji)." 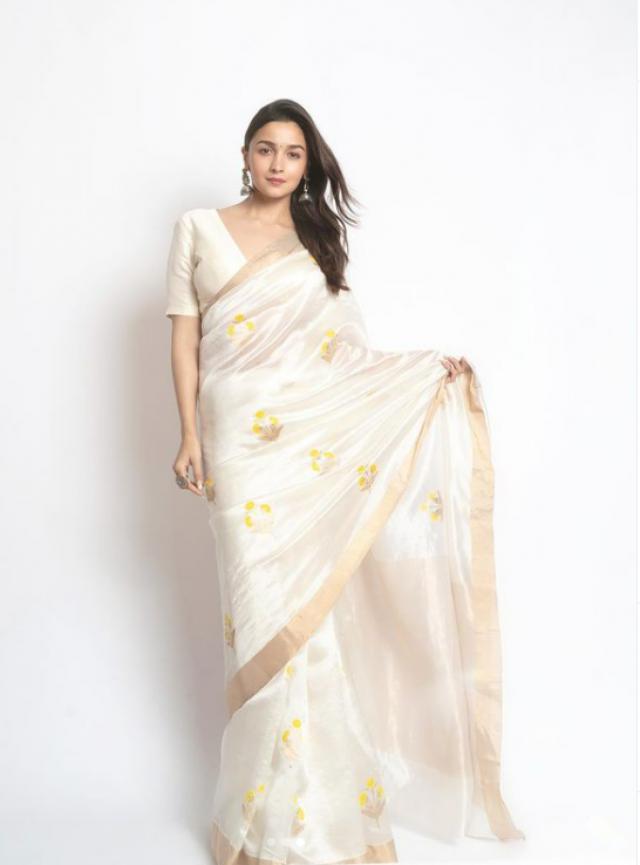 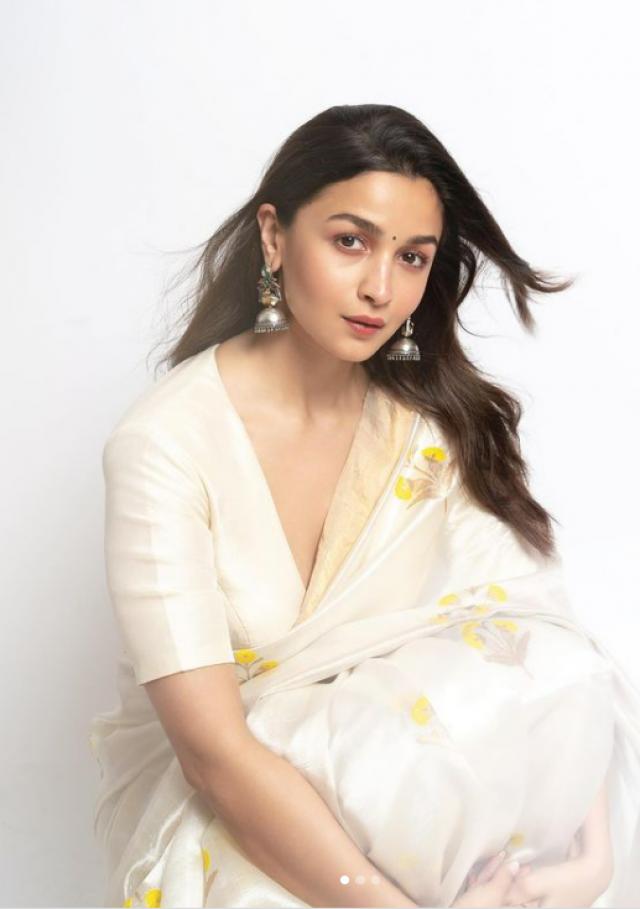 Alia Bhatt's future mother-in-law, Neetu Kapoor, is her biggest cheerleader and supporter at every step of her professional journey. Time and again, we have seen Neetu Kapoor dropping cutesy reactions on Alia's mother, Soni Razdan's pictures too. For instance, on March 15, 2020, Soni Razdan had taken to her Instagram handle and had posted two throwback pictures of her daughter, Alia, from the memory lane on her 27th birthday. Neetu Kapoor had wasted no time in dropping a cutesy comment on Soni Razdan's post, and it could be read as: 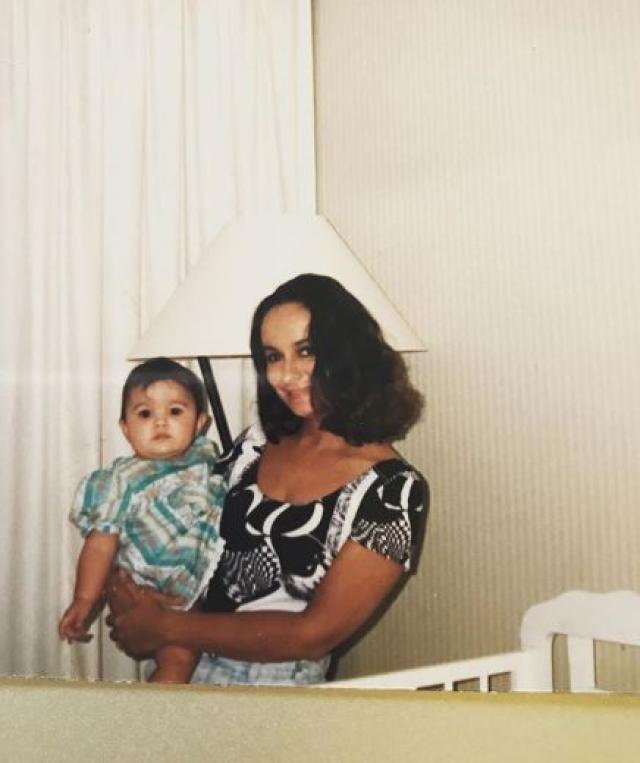 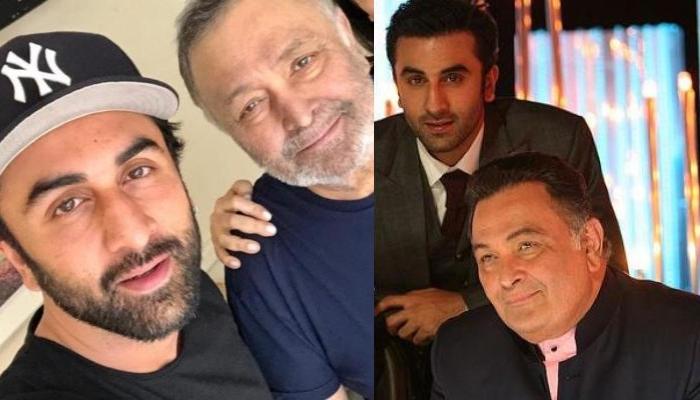 Bollywood actor, Ranbir Kapoor is not on any social media platform, which is the reason why his massive fandom and media wait anxiously for his films because that's the only time when he got to see him speaking and interacting. Otherwise, he mostly prefers to avoid interviews and chit-chat with