Social media is getting uncanny and absurd with every passing day. As soon as a celebrity tweets something on Twitter, it gets viral in no time. Undoubtedly, Virat Kohli and Anushka Sharma are definitely one of the most happening couples in the industry, courtesy their intimate public display of affection on social media.

And Virat’s latest cryptic tweet has left the netizens and all his fans into a frenzy. His mysterious tweet has started with the conjectures and speculations of his wife, Anushka’s pregnancy. Yes, you read that right! On March 9, 2018, Virat tweeted, “There’s a lot that’s happening right now. Fill you guys in real soon!” And since then, there has been no update from the cricketer about what he was referring to in his tweet.

Virat Kohli’s tweet was followed by many retweets and comments by the Twitterati. The comments said, “Got anushka pregnant so quickly?Scoring well off the field too”, “Sir ji chota virat kholi aane wala hai”, “Good news?”, “Small virat coming soon....” and many such more. Take a look at a few comments: 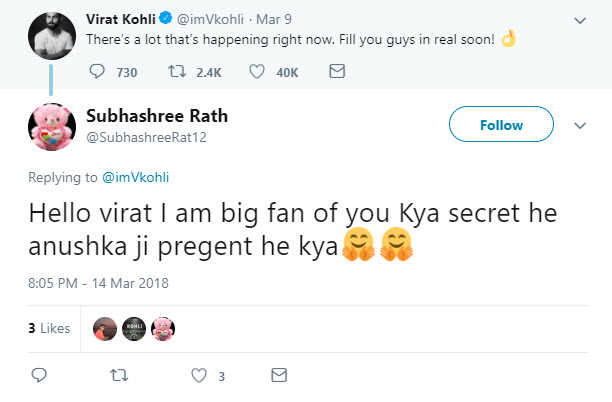 No one is really sure what Virat’s tweet meant and everyone is waiting for him to fill in what’s going on. Cricketer Virat speaks with his bat and Anushka’s acting skills does all the talking for her. Virushka, as their fans fondly call them, are considered as role models for the young generation. From their fairy tale dreamy wedding in Italy to Anushka sporting Virat's t-shirt at the airport, they are giving some major couple goals to everyone. Virat and Anushka walked down the aisle on December 11, 2017, in Tuscany, Italy. 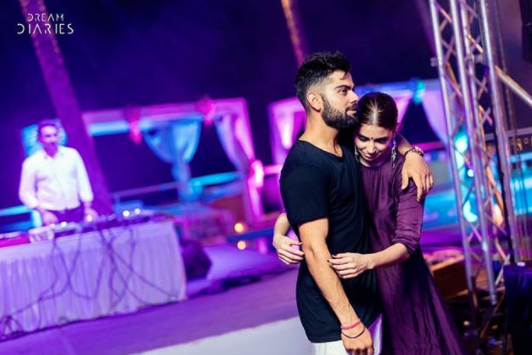 Virat like a doting husband is totally supportive of his wife’s work and acknowledges Anushka for her splendid performances on-screen. Appreciating her work in Pari, Virat tweeted, “Watched Pari last night, has to be my Wife's best work ever! One of the best films I've seen in a long time. Got quite scared but so very proud of you @AnushkaSharma”. He also credited Anushka for her inspiration and support, and was quoted as saying, “My wife has been keeping me motivated throughout, and she deserves a lot of credit for this. She has been criticized a lot in the past, but she is one person who has kept me going throughout this tour and when times have been tough and I am really grateful for that.” (Also Read: Radhika Apte On How She Manages Her Married Life With Benedict Taylor: It's Exhausting And Expensive) Anushka is also equally expressive about her feelings, and never shies away from showing her love for him. From cheering from the stands in Virat’s match to posting Instagram stories about her hubby’s centuries, Anushka and Virat are truly a gem of a couple! 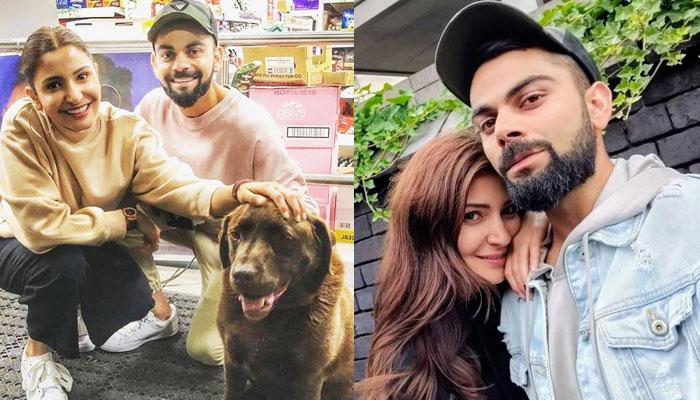 The lovey-dovey couple, Virat Kohli and Anushka Sharma are enjoying their marital phase to the fullest. The lovebirds gave a pleasant surprise to all their fans when they secretly tied the knot on December 11, 2017, in Italy. Virushka’s (as their fans fondly call them) fans went gaga over their