Hrithik Roshan's Mom Reveals What Was He Always Curious About On Birthdays, His Reply Is Unmissable

Hrithik Roshan's Mom Reveals What Was He Always Curious About On Birthdays, His Reply Is Unmissable

Check out how the handsome hunk, Hrithik Roshan used to bug his mom on birthdays, and what he has to say about it! Hrithik Roshan is a name that Indians take pride in. The only Indian actor to have constantly been the number one on the world's most handsome men's list. Those soulful eyes and that mould manoeuvred body, impart him the looks of a Greek God! His impeccable acting and dancing abilities set him apart from the rest of the actors. And to think Hrithik Roshan was just like any other, curious, gullible kid in his childhood is incredible! (Recommended Read: Kangana Ranaut Turns Hairstylist As She Gives A New Haircut To Sister, Rangoli Chandel)

The most handsome man in the world, a gem of Indian cinema and the master of incredible dance art and impeccable acting, Bollywood's handsome hunk, Hrithik Roshan may be a brand in himself, but guess what, he'll always be a little kid in his mother's eyes! Truly said, no matter how old you grow, or how famous you become as a public figure, your mother always finds a way to embarrass you by sharing little anecdotes from your childhood. Scroll down to know how the handsome hunk, Hrithik Roshan used to bug his mom on birthdays, and what he has to say about it! 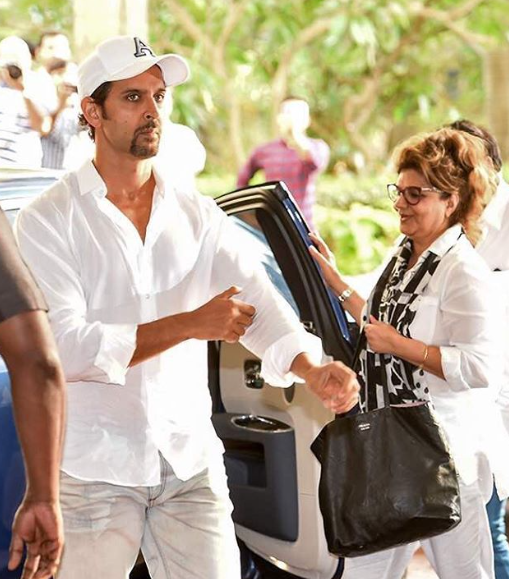 Hrithik Roshan's mother, Pinkie Roshan took to her Instagram handle on June 13, 2020, to share a black-and-white picture of little Hrithik, standing beside his mother and gazing intently as his mother cuts the cake. Revealing little Hrithik's funny antics, his mother wrote in the caption, "#happybirthdaycake #he was always curious to see the shape of his birthday cake#love you." To which, Hrithik replied in the comments section, "Hahaha it usually was a disco dancer or a superhero or a house if I remember." Check out the picture and screengrab of the comments below: 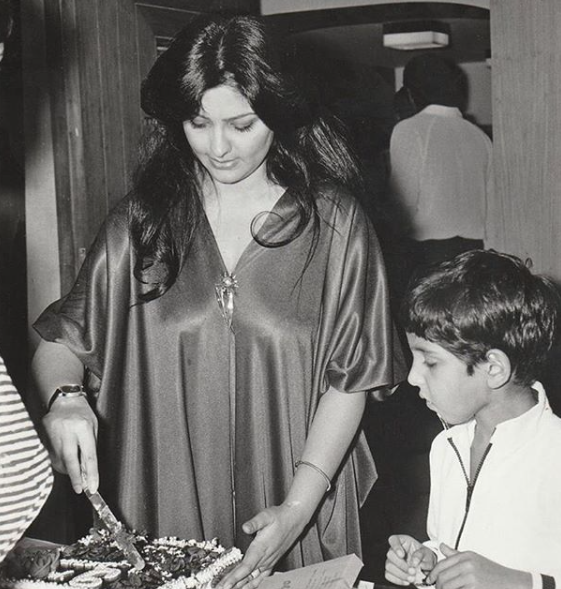 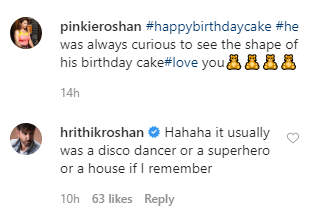 Hrithik is extremely close to his mother, Pinkie Roshan and flaunts his love and admiration for her on his social media handles, time and again. On the occasion of Mother's Day, Hrithik had taken to his Instagram handle to post a video collage of his mother, consisting of her various pictures depicting different moods. There are also pictures of her working out with Hrithik, lazing around with her grandsons, and having a blast on vacations. He had also written a heartfelt note alongside the video which could be read as "She is my lullaby. Happy Mother’s Day mama. Happy #mothersday to all the mama’s in the world." Take a look at the video below:

The doting son that Hrithik is, he never shies away from expressing his immense affection for his mother. On her birthday in 2018, he had written a sweet message for her on his social media handle, which could be read as "My mother deserves the world and she doesn’t know it. This is a reminder from her son on her birthday. Don’t wait for your near and dear ones to be happy before you allow yourself to do all the things that make you happy mama. Life is now and you owe it to yourself first. Happy birthday mama! Love you more than you love me." (Also Read: Sanaya Irani Opens Up On Her Beach Wedding With Husband, Mohit Sehgal) Just like her son, Hrithik Roshan, Pinkie Roshan is also a fitness freak and is often spotted sweating it out at the gym. Last year, Hrithik had shared a video of his mother working out at the gym, and had then burst into an impromptu dance on Jugrafiyaa. The War actor had captioned the video as "Wait for it... #championoflife #supermom #loveyoumama #truelove (sic)." Have a look at it below. (You May Also Like: Aayush Sharma's Son, Ahil Sharma Learns The Alphabet, The Proud Daddy Calls It A 'Priceless Moment')

Does your mom also embarrass you by narrating your silly childhood antics?