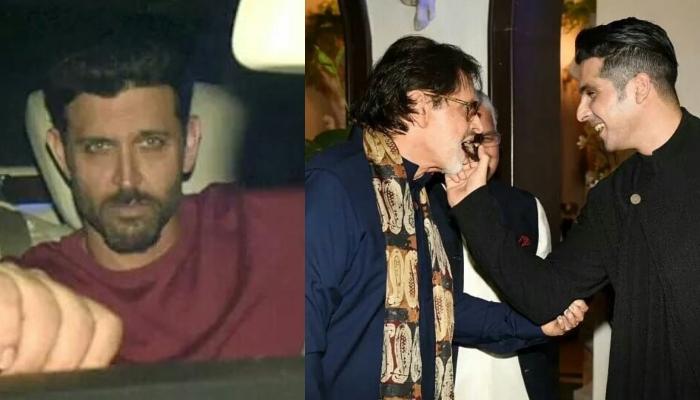 No one can deny the fact that Bollywood actor, Sanjay Khan is one of the most loved actors of yesteryear. Yesterday on January 3, 2018, he celebrated his 78th birthday with family and friends from the industry. The event turned out to be a starry night with who’s who of the industry in attendance. (Recommend Read: Sara Ali Khan Comments On Being Compared To Her Mother, Actress Amrita Singh, Says It'll Take Time)

The night marked the presence of A-listers from Bollywood which included Shabana Azmi, Shatrughan Sinha, Madhur Bhandarkar, Poonam Dhillon, Randhir Kapoor, Daboo Ratnani. Interestingly, Sanjay Khan’s daughter, Sussanne Khan’s ex-husband and actor, Hrithik Roshan also marked his presence to celebrate the legendary actor’s birthday. He was papped in a maroon t-shirt as he entered the venue in his car. Check out the pictures below:

Sanjay Khan was also seen in the group pictures. On his birthday, the actor also announced the launch of his second book titled Assalwaliakum Watan. He also said, “I don't really celebrate my birthday each year, but this year it's an exception. I'm really glad about the success that my book The Best Mistakes of My Life has garnered and I'm now planning to announce my second book Assalwaliakum Watan, on my birthday.” (Also Read: Rohit Sharma Shares The First Photo Of His Baby Girl And Wishes A Happy New Year To Fans, Pic Inside)

While we loved Hrithik and Sussanne Khan’s magical love story, they shocked the entire nation when they got separated in 2013 and divorced in 2014. In an interview with Hindustan Times, Sanjay Khan talked about his daughter’s divorce and said, “It is sad and unfortunate. The institution of marriage is being eroded and isn’t celebrated as it was in the earlier days, when it was marriage till death do us part. My personal advice to all youngsters who get married would be to do their best to make it work. When we could do it in our times, why can’t you?” He advised the youngsters of today’s times, “Do not be distracted… see the value of home life, see the value of a good family, don’t think frivolously and while under the influence of alcohol or drugs.” 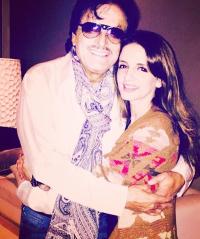 He further revealed that he loves both Hrithik and Sussanne as a couple. He said, “I love Hrithik still and I love my daughter. They must have their reasons. Fine. But the good part is, they’re still very good friends. And the children don’t feel the negative impact of their separation because of the combined efforts of both to keep it working. They holiday together, they take care of the children from time to time, babysitting and stuff. When people say that Hrithik is no longer my son-in-law, I say I have a relationship with him: he is the father of my grandchildren, and that can never be erased! So, umm, I still hope they get back together. That’s it!” (You May Also Like: Randhir Kapoor Opens Up On Brother Rishi Kapoor's Health, After Neetu Kapoor's Cryptic New Year Post)

In fact, at the start of 2018, a Deccan Chronicle report had claimed, “Hrithik and Sussanne are working it out. They identified the stress areas in their relationship and are doing their best to work their way around them. Give them time—they will come together again”. 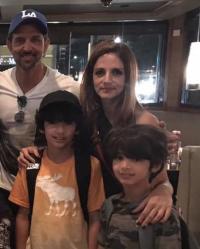 But soon, when media approached the Roshan family, a member shared, “They are done with one another- to even suggest that they can be a couple again is ridiculous. They've agreed to meet and spend time together for their children's sake whenever they feel like it. Beyond their obligation as parents, both Hrithik and Sussanne have their own separate lives.” (Don't Miss: Raveena Tandon Shares A Video Of 'BayBee' Daughter Boxing Like A Pro, Says No One Messes With Her)