The most-awaited Game of Thrones released on April 15, 2019, and Hina Khan, as she must have promised to her beau, Rocky Jaiswal, controlled her desires and didn't watch it without him!

A relationship is built brick-by-brick with trust and promise. The definition of trust is something that you all might know, but promise? Oh, they are of various kinds! Promise to be with each other, promise to have cheat days everyday, promise to snore some less (which never gets fulfilled), promise to spend weekends wisely and promise to watch the favourite series together. But do you know what is modern-era cheating? When you watch that most-awaited web series alone that you had promised to watch together! And true loyalist, Hina Khan surely knows how to do that seamlessly for her beau, Rocky Jaiswal. (Do Read: Neena Gupta Reveals Daughter, Masaba Gupta And Madhu Mantena Divorce Came As A Shock To Her)

It was only in Bigg Boss 11, that the world was apprised about a smooth-sailing relationship between Hina Khan and the producer of her show, Yeh Rishta Kya Kehlata Hai, Rocky Jaiwal. Their relationship had stood firm through the test of time and are going only smoother with every passing day. Time and again on her Instagram story and social media feeds have expressed her love for her beau, Rocky. On December 31, 2018, Hina taken to Instagram and sharing a mesmerising picture from the same had posted an all-happy picture with the caption, “Tum ho”, backed by a heart emoji.

Hina Khan Meets Rocky Jaiswal And Her Sister-In-Law, The Duo Twins In Matching Masks With Initials 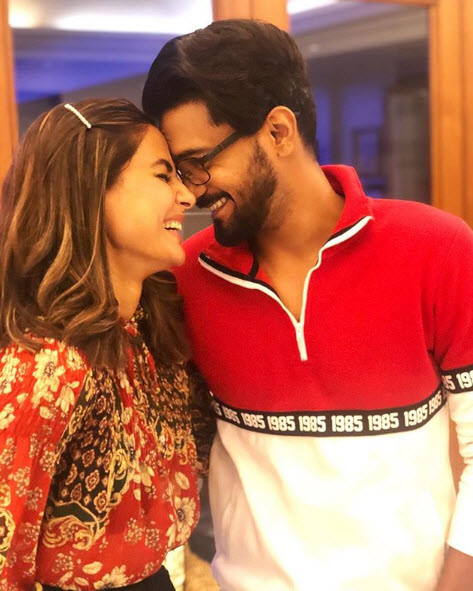 While you must be still ‘awww-ing’ over the picture, let us give you another sneak peek about what adorable actually is like! Hina Khan’s beau, Rocky Jaiswal was in London for quite some time, shooting for his feature film and Hina had a hard time without him. Rocky had shared a video, showing the insides of the plane with the words “Coming to see you @realhinakhan” written atop it. Sharing the same video, Hina wrote, “Dying to see you atop the picture”. While Rocky was welcomed with a sumptuous-looking dessert, a gesture of Hina must have swept the producer off his feet! The most-awaited Game of Thrones released on April 15, 2019, and Hina Khan, as she must have promised to her beau, Rocky, didn’t watch it without him! She had waited for him to come back and together, they watched it! How adorable is that! Checkout screenshots of the same here: 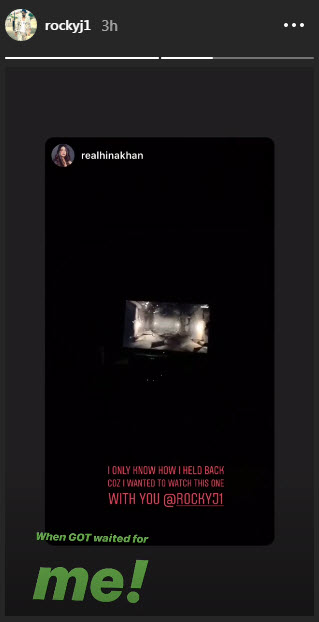 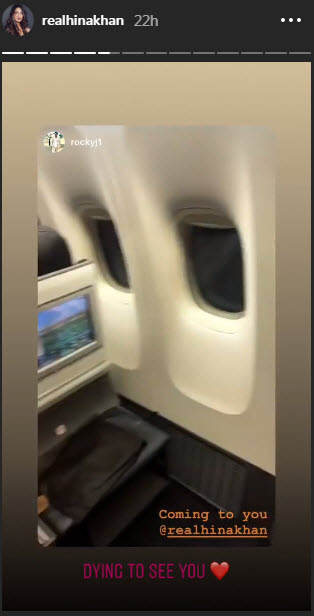 Hina Khan was recently enjoying her blissful time with her fun-filled family holiday in the Maldives but the thoughts of her producer-boyfriend, Rocky Jaiswal doesn’t seem to cease! While Rocky was busy shooting for his feature film, Doorman, in London, Hina was on a vacay. Rocky had then taken to Instagram and posting a beautiful picture of a yellow dandelion flower, wrote the words, “Everything rare and pretty reminds me of you!” atop the picture and tagged ladylove, Hina Khan on the post. The doting girlfriend reposted the same from her Instagram story, and had written “Miss You” on it, followed by a lovey-dovey emoji. Here’s a snapshot of the same: (Must Read: Ripci Bhatia's Sister Gives Her And Sharad Malhotra The Most Heartfelt Gift Ahead Of Their Wedding) Hina Khan and Rocky Jaiswal’s unavailability was the reason that Hina Khan and Rocky Jaiswal weren’t able to take up Nach Baliye 9. The duo was approached for being participants in the dance reality show but unfortunately, had to turn down the offer due to prior work commitments. Revealing details on the same, Hina had stated, “Yes, we are approached for Nach Baliye. However, we won’t be able to participate, as we both have packed schedules. I am busy with Kasautii Zindagii Kay and the movie schedule lined-up, while Rocky will soon fly to London for his next feature film.” Hina Khan’s boyfriend, Rocky Jaiswal leaves no stone unturned when it comes to expressing how deeply his muse is loved. Very recently, Hina Khan had decked-up as a Bengali bride for a segment in her show, Kasautii Zindagii Kay and looked stunning! Rocky had immediately taken to Instagram and posting a beautiful picture of Hina in her Bengali bridal avatar, wrote the words, “The bride of my dreams” atop the picture, with the hashtag, #Bapokk, which means 'ethereal' in a funky way in Bengali. Here is the picture: As mentioned, Hina Khan and Rocky Jaiswal are one of the few couples, who fell in love on the sets of Yeh Rishta Kya Kehlata Hai. Speaking of where they met and how love happened, Rocky had shared, “We met on the sets of Yeh Rishta Kya Kehlata Hai for the first time where I was the supervising producer and she was playing the lead role. That's how we met. As for what attracted me to her was her dedication to her work. I have seen a lot of actors, but she is one of the smartest of the lot.” And further added, “It is almost unreal if you find a person who's so honest all the time. She calls a spade a spade every single time. And that's the most important thing I love about her. Besides, she is the prettiest woman in the world.” (Also Read: Malaika Arora And Arjun Kapoor Go Through Pre-Marital Health Check-Up Just Before Rumoured Wedding?)