We got a glimpse of 'Ganesh visarjan' celebrations at Hema Malini's home as she shared pictures from the same on her Twitter handle. Scroll down to check them out! Bollywood's Dream Girl, yestertime actress, Hema Malini's charm is till as it is, as it was in those times. When she climbs the stage and moves her feet, the audience is mesmerised by her scintillating performance. Even at the age of sixty, Hema ji's charm, craze and popularity reach new summits every day! (Recommended Read: Nargis Fakhri Makes Her Relationship With New York Chef Insta Official, Goes Shooting With Him)

Hema Malini's daughter, Esha Deol Takhtani and Ahana Deol Vohra have also been performing on-stage for years with her. For the first time ever, the mother-daughters trio had collaborated to sing a devotional song this year. They had recorded a song, which includes Pranamya Shirasa Devam and Vakratunda Mahakaya (stotras dedicated to Lord Ganpati) for Times Music's devotional album, Raja Ganpati. Esha had announced the news on her IG stories. 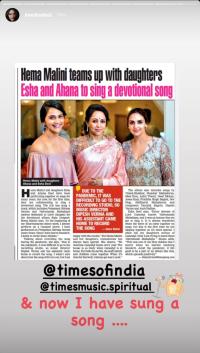 We got a glimpse of Ganesh visarjan celebrations at Hema jis's home as she shared pictures from the same on her Twitter handle and wrote in the caption, "Ten days of joy, ten days of his lovely benevolent presence, ten days of aarti both morning and evening, how much we enjoyed Ganesh ji’s stay in our house! Till today it was time for him to leave - sad moment for us but we know he will be back next year! Ganapathy Bappa Morya!" In an interview with The Times Of India, Hema jis had talked about emotions associated with Ganpati bappa and had said, "We welcome Ganeshji home every year. The house is so lively when Ganeshji is at home. For both the aartis, the staff, family and children come together. When it’s time for farewell, I always get teary-eyed." (Also Read: Shoaib Ibrahim Slams A Fan For Schooling Him For Not Helping Wife, Dipika With Household Chores) 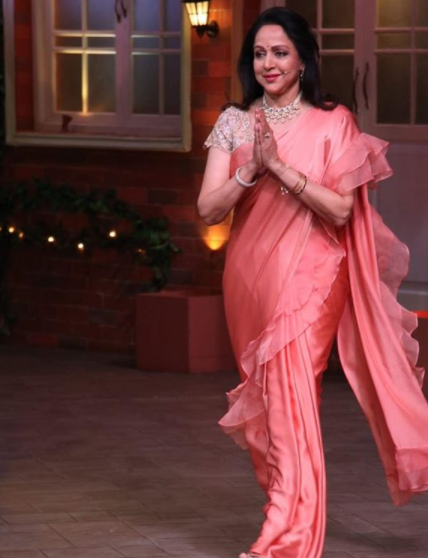 Esha Deol Takhtani had performed with her mother, Hema ji for Ganpati show 2020. In a conversation with E-Times, she had talked about how her daughters, Radhya and Miraya used to join them for the dance practice. She had shared how she used to rehearse for her performance and her daughter, Radhya would join in tying the dupatta in the same manner. She had said, "Mom and I would rehearse around 4 pm in our salwar kurtas and Radhya would be ready before us, in the same attire, with the dupatta tied in exactly the same way. She is eager to learn dance and during every rehearsal she was doing her own thing. As for Miraya, she can already recite the classical taal. In our family, there is no escaping dancing." It seems there is really no escaping dancing in their household as before the birth of her granddaughter, Radhya Takhtani, Hema Malini had expressed her wish to teach Bharatanatyam to her. In an interaction with the Indian Express, Hema ji had expressed, “I am just waiting for Esha’s baby! I already have my little guardian (Ahana’s son, Darien), he is a wonderful kid, my grandson! He is very fond of everybody in the family, but I like to believe that we both have a special bond. I like to make sure that kids have a little spiritual inclination, so Darien folds his hands and wishes people, has prashad I offer my Laddu Gopal (God idol). I don’t know if they will believe in God as they will grow up, he, of course, doesn’t understand spirituality now, but it is beautiful to see my grandchildren growing up so well. If Esha has a boy, I will have one more grandson, and she has a girl I will definitely teach her Bharatanatyam!” (Don't Miss: Teejay Sidhu Never Imagined Herself To Be A Mother Of Three, Is Elated To Embrace Motherhood Again)

Do you also feel the same while bidding adieu to bappa? Share with us!