Hardik Pandya has finally reunited with his son, Agastya Pandya after 4 months and mommy, Natasa Stankovic shared a cutesy video of their reunion. Check out the video inside!

When a child is born, every parent wants to spend most of their time with their little one. They wish to breathe in every habit of their child and watch their child grow. The first few months become extra special as that is the time when a child shows the major signs to changes. From teething to blabbering, crawling to responding, the child begins to understand and learn basic things in the first few months, and thus it becomes important for every parent to be with their munchkin. However, not every parent is lucky as some have to give in to their professional commitments. Something similar had happened with Indian cricketer, Hardik Pandya. (Also Read: Tiger Shroff Reveals His First-Ever Crush's Name, And It's Neither Disha Patani Nor Shraddha Kapoor)

The year 2020 had brought a series of happiness in Hardik Pandya’s life. With Natasa Stankovic accepting his proposal to marry him, to getting married and announcing the news of expecting a child and then finally welcoming a baby boy, Hardik’s 2020 has been a year full of blessings. Soon after embracing fatherhood, Hardik had jetted off to Dubai for IPL 2020 and was away from his son for almost 4 months. However, now the daddy is back with his baby, Agastya and mommy, Natasa has recorded their playful reunion. Taking to her IG handle on December 12, 2020, Natasa Stankovic shared a Boomerang of her hubby, Hardik playing with their son, Agastya. In the video, Hardik can be seen sitting on a couch, holding his son in his arms and trying to talk with him, while Agastya can be seen moving his legs in response to his father. Sharing the cutesy moment of Hardik and Agastya, Natasa used three emoticons, world, father-son and blue heart. Take a look:

A few days back, we had stumbled upon a video posted on the official IG page of International Cricket Council, wherein, Hardik Pandya could be seen having a heart-to-heart conversation with the commentator about his family. In the video, Hardik could be heard saying, "Feeling thoda different hai. Automatically hojate hai sir kyuki jab baccha hota hai toh automatically thode aur kaam hote hai. (The feeling is a bit different. It happens automatically because when you have a baby, your work increases)." He had added, "You start thinking about life in a different way. I think my perspective towards my family has changed. As a person, I have changed and I think the change has come for better." Hardik had further gotten emotional as he had talked about missing his son, Agastya and had said, "Miss kar raha hoon and abhi jaana ka wait. 15 din ka tha jab usko chod ke aaya tha aur abhi chaar mahine ka hojayega jab wapas jaunga toh. A lot of things have changed but all for our good." (Don't Miss: Ankita Bhargava Shares Experience With Mom Guilt And How Her Daughter, Mehr Karan Patel Inspired Her)

On November 30, 2020, Bollywood actress, Natasa Stankovic had taken to her Instagram handle and had shared some beautiful pictures with her little prince, Agastya Pandya as he had turned 4-months-old. In the photos, the mommy-son duo had looked adorable in their respective outfits, but it was Agastya's cake that had looked mouthwateringly yum and super-cute. Along with the pictures, the doting mommy had penned a short and simple caption, and it could be read as "Agastya #4monthsold." 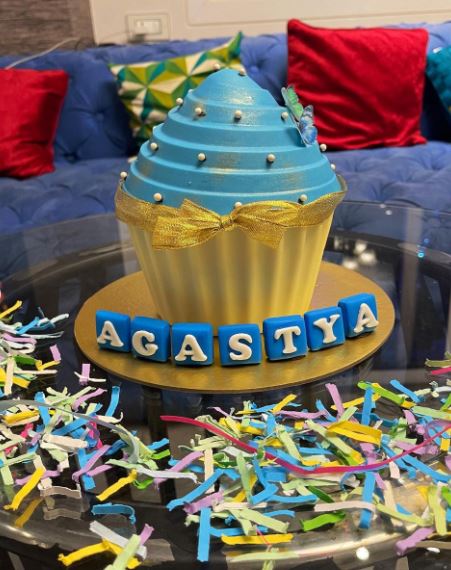 Earlier, we had spotted a video on the IG page of Mumbai Indians, the team which Hardik represents in the IPL. In the video, talking about how difficult it was for him to leave for UAE for IPL 2020, leaving behind his wife, and newborn son, Agastya. Hardik had said, "It's been just a fantastic time for me to even spend 15 days with my child and Natasa before I left for UAE. And it was the toughest thing, and that's why I think I told Natasa as well that if it's going to pain this much, I will make it worth it." (Recommended Read: Jwala Gutta And Fiance, Vishnu Vishal's Happiness Knows No Bounds At Her Sister's Mehendi Function)

We totally loved the reunion of Hardik and Agastya! 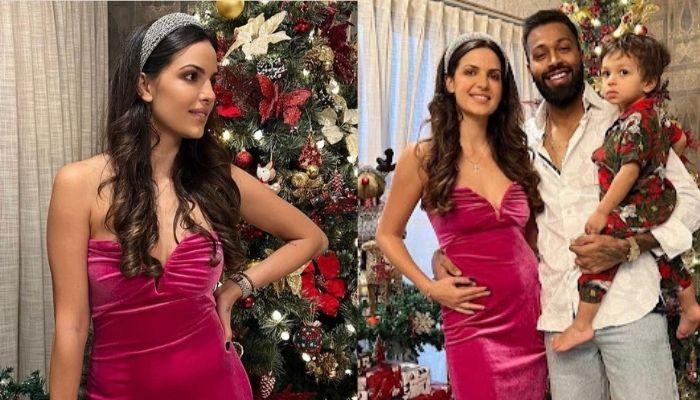 Hardik Pandya is well-known for surprising his fans with some ‘good news’. He had made everyone’s New Year 2020 blissful when he had announced his engagement with his ladylove, Natasa Stankovic. Later, during the lockdown 2020, they had announced their marriage and the news of their pregnancy on May 31, 2020.