This Turkish Bride And Groom Shared Their Wedding Buffet With 4,000 Syrian Refugees

This Turkish Bride And Groom Shared Their Wedding Buffet With 4,000 Syrian Refugees

When Turkish couple, Fethullah Uzumcuoglu and Esra Polat decided to get married in the town of Kilis, little did they know their wedding would become an example for the whole world! Fethullah and Esra got married on July 30, 2015. But instead of throwing a lavish wedding reception party for their friends and family members, the couple chose to serve food to 4,000 Syrian refugees who have been constantly fleeing their country towards Turkey.

TRENDING: 5 Stunning Bollywood Divas Who Changed Their Religion For Love!

Breaking Stereotype: Why This Bride Wore Black On Her Wedding Day Kilis has been the central crossing point for the Syrians since the civil war and their plight is not hidden from the whole world. It is during this time period that Fethullah's father, who volunteers at a Turkish Relief organisation called Kimse Yok Mu (KYM) came up with this idea to share the wedding buffet. In an interview to Independent i100 blog, this is what he said:

“I thought that sharing a big delicious dinner with our family and friends was unnecessary, knowing that there are so many people in need living next door.” 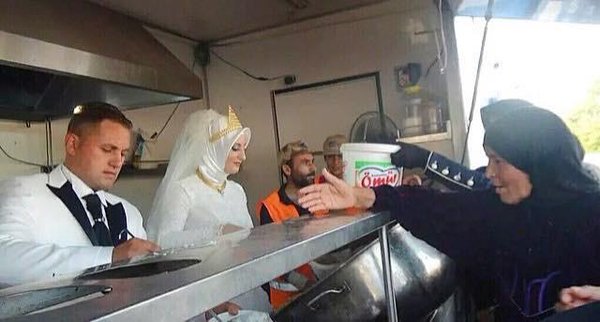 CHECKOUT: This Is What a Billion-Dollar Wedding Looks Like!

At first the groom was a bit taken aback with the idea. In fact, when the bride heard about it she was shocked as the wedding is all about the bride and the groom and who would want to share the limelight that day. However, the couple soon came on-board and willingly participated in the plans. In fact, both the groom and bride's friends and family members too joined in to perform this noble service to the refugees. Polat was only too happy to share her special day:

“I’m happy that we had the opportunity to share our wedding meal with the people who are in real need.” 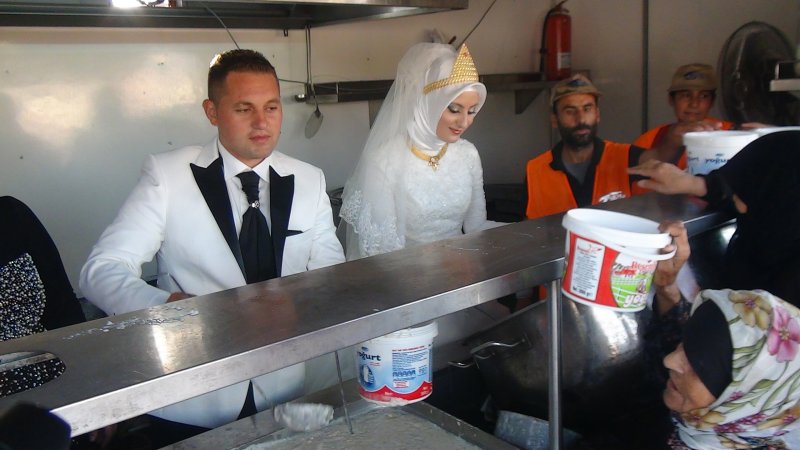 Recommended Read: The Beautiful Video Of Chiranjeevi's Daughter Sreeja's Wedding Is A Must-Watch

The couple stood behind hired food trucks on their wedding reception day dressed in their wedding attires and doled out food to around 4,000 happy Syrian refugees. Watch it here:

While the bride looked like a princess in her detailed white gown complete with a hijab and tiara, the groom looked dapper in a white tuxedo with a black trim. But to the onlookers, they were nothing less than a pair of angels who came to share their special day with the deprived Syrian refugees. Also See: Top 10 Most Talked About Bollywood Star Kids Of 2016

The couple themselves were elated to be a part of such a good deed. Read what the newlywed groom’s feelings about this: Recommended Read: How I Met Your Father- Australian Woman Traces Her Sperm Donor And Marries Him

Well, all we can say is despite all the civil wars, bomb blasts and terrorist attacks happening in the world, the bond of humanity still exists in this world that unites people across borders. Hats off to this couple for showing the world that all it takes is one step to execute a good selfless deed! 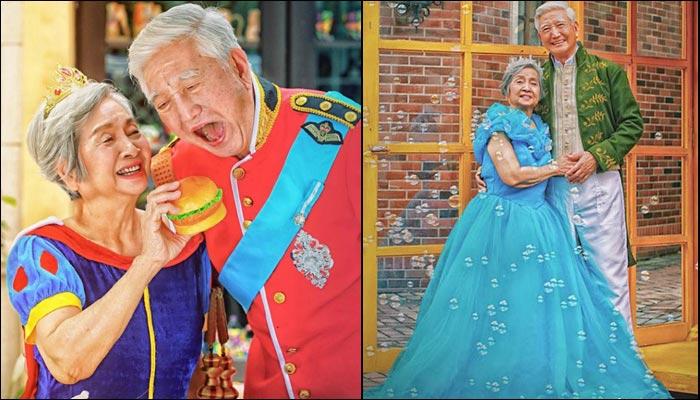 Some couples marry young, some tie the knot a little later, but only a few are blessed to be with their loved ones throughout their life. Here is one such story that inspired us and gave us serious relationship goals. And, the cherry on the cake here is their super-cute wedding

Breaking Stereotype: Why This Bride Wore Black On Her Wedding Day