Genelia Deshmukh and Riteish Deshmukh are an epitome of true love. On January 3, 2020, Genelia shared a picture with her hubby, Riteish on completion of 17 years of their debut film. 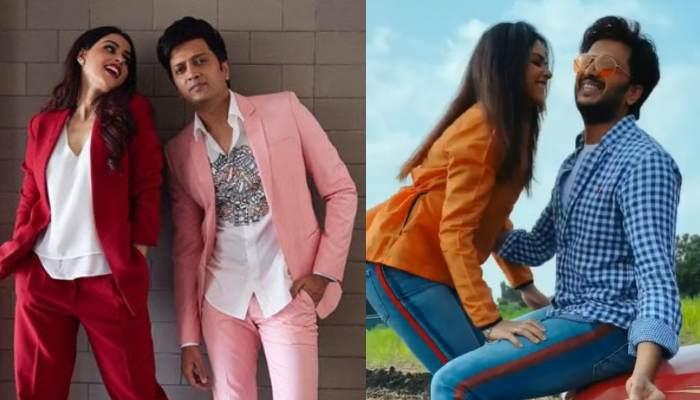 Falling in love makes wonders and when you fall in love with your best friend, it adds up the happiness. Being with somebody who takes care of all the little details of your life, make vacation plans to surprise you and shares a good rapport with all your friends and family is what every girl looks for in a partner. Life gets a new meaning when love is intact in a relationship even after being married for years. Bollywood beauty, Genelia Deshmukh and her best-friend-cum-husband, Riteish Deshmukh are an epitome of true love. (Also Read: Mohena Kumari Singh Exudes Royalty In Unseen Pictures From Her Wedding Shared By Designer Sabyasachi)

Genelia Deshmukh and Riteish Deshmukh are the most sought-after couple of Bollywood and have been setting couple goals with their camaraderie. A casual meeting in the year 2002 for the test shoot of their debut film, Tujhe Meri Kasam has changed their lives (for the better). Genelia was 16 years old when she had met Riteish for the first time. They had become friends and had gradually fallen in love with each other. After dating for 9 long years, the much-in-love couple had tied the knot on February 3, 2012.

On January 3, 2020, Genelia Deshmukh and Riteish Deshmukh’s debut film completed 17 years and she expressed her joy over the same. Genelia took to her Instagram handle and posted a picture with her hubby, Riteish. Along with the picture, she wrote, “17 years of “Tujhe Meri Kasam”… My first film- It has my heart quite literally.” In the picture, Genelia looked adorable in a brown jacket and blue denim whereas Riteish complemented his wife in a casual checkered shirt. His bottom twinned with his wife’s. Genelia also shared an adorable video where both she and Riteish danced in the cutest manner on the title track of the film “Tujhe Meri Kasam”. Along with the video, she wrote, “17years later.... Reliving the magic of our debut film. #17YearsOfTujheMeriKasam.”

Riteish and Genelia had celebrated their New Year on a farm with their kids, Rahyl and Riaan. Riteish had taken to his Instagram handle and posted family pictures from their New Year celebrations. Along with the pictures, he had written, “Spending a week in Latur & living the farm life is the best way to bring in the new year. Wishing a Happy 2020 from our family to yours. Love Rahyl, Riaan, @geneliad & yours truly.” (Also Read: Saif Ali Khan Opens Up On Daughter, Sara Ali Khan Being A Part Of The 'Love Aaj Kal' Sequel)

Genelia and Riteish have reinstated our faith and have made us believe in true love. They have proved that if there is love, nothing else matters. Genelia, who is quite active on social media had taken to her Instagram handle on December 17, 2019, and had posted a beautiful family picture with a heartfelt birthday wish for her hubby, Riteish. Her note could be read as “Dear Forever Mine I will say the same thing to you now, that I will say to you when you turn 100. You are my today and all of my tomorrows Happy Birthday Love. Forever yours Ps- I’m always in the mood for you.”

On February 3, 2019, Genelia Deshmukh had penned down a long note for her darling hubby, Riteish Deshmukh to mark their seventh wedding anniversary. She had written, “Every girl has a certain perception of how they would want their life partner to be... I Honestly Didn’t... I had this most amazing partner who was my bestest friend, who was the shoulder, I always found when I needed to cry and who made me believe that no matter how tough life is, with us being partners we would take it on, in any form, in any way... That’s the man I eventually married and he never ever stopped being the reason for my smile... So I’m glad I never ever had a perception because the reality of living and breathing this wonderful man is all I ever needed to know... I Love you @riteishd ..Here’s to many more laughs together, to the zillion times we will wipe each other’s tears and pick each other up when either/or feels weak or simply to live together forever and ever... Happy Anniversary.” (Also Read: Ankita Bhargava Reveals Who Chose The Name Of Her Daughter Mehr Karan Patel And The Reason Behind It)

Here's wishing Genelia and Riteish, all the best for their future endeavours! The year 2002 had witnessed the maiden voyage of a beautiful love story, the one we still look up to even after 18 years! Genelia and Riteish had met on the sets of Tujhe Meri Kasam and had embarked on the journey of their 'happily ever after' on February 3,