Gautam Gambhir Trolls Wife, Natasha And Says He Gets Fired At Home Everyday, She Replies Hilariously

Gautam Gambhir Trolls Wife, Natasha And Says He Gets Fired At Home Everyday, She Replies Hilariously Pyaar Ka Dard Hain, Meetha-Meetha, Pyaara-Pyaara..this is exactly how we would like to define every husband and wife’s bitter-sweet camaraderie! From those teekhe nokh-jhok, coming back home and finding that she has been waiting for you all this while inspite of being angry to sending flowers at your workplace after your big fight, a husband and wife’s relationship is the most amazing one on this planet. In the similar lines, one of the ace cricketers of the Indian cricket team, Gautam Gambhir and his wife, Natasha Gambhir’s cute chemistry swoons us over! (Do Read: Madhuri Dixit's Birthday Wish For Her Son Arin Is Pure Love, She Cannot Believe How Time Flies)

Gautam Gambhir and Natasha Gambhir had gotten married on October 29, 2011 in Gurugram and every sight of them together is a treat to the eyes. From sharing pictures with his ladylove and telling the world how much his family matters to him, there are a zillion things to learn from this ace cricketer. A glimpse of the same can be seen in Gautam’s 2018 birthday wish for his darling wife on her birthday. Sharing a picture of her blowing out her birthday candle, with daughters, Aazeen and Anaiza, this is what the ace cricketer wrote, “As they concentrated on the cake, I was focused on the three beautiful cherries of my life. Happy birthday Natasha!!!” 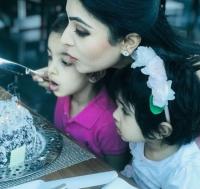 And here we are to share with you, something adorable about this couple. On March 16, 2019, Gautam Gambhir was awarded the prestigious Padma Shri Award by the President of India, Shri Ram Nath Kovind. Gautam took to Instagram and Twitter and posted a beautiful picture with his wife posing ahead of top (a bombing weapon) and had written, “Back to reality with a LOUD thuddddddd!!!! Padmashri with his Sri Sri Srimati @natashagambhir2 Don’t worry about the top in the background, I get fired everyday at home #PADMASHRIGAUTAMGAMBHIR #PadmaShriAward #Padmashree.” Wife Natasha immediately understood her hubby’s troll and shot back by saying, “Behind every successful man is a woman”, which she backed up with two wink emojis! Aren’t they adorable? Checkout snapshots of their tweets here: 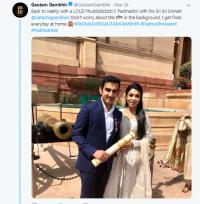 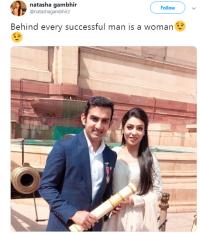 In a throwback interview, Natasha Gambhir had recalled her love story with hubby Gautam Gambhir and had shared, “We'd known each other, been friends for 2-3 years, and then we decided to get married. Our families had also known each other for the last 30 years -- our fathers knew each other -- and then we became friends. We both decided (to get married) first, and then took our parents' consent. We'd been engaged for about a year before marriage.” (Must Read: Ranbir Kapoor Had Pranked GF, Alia Bhatt On Her Birthday Eve With The Help Of This Famous Director)

Talking about her apprehension about their wedding, Natasha Gambhir had stated, “When I met him, I realised he was a star -- when we used to go out for dinners, I realised he was really popular and stuff, but when we were thinking marriage, then the whole celebrity status... I did think about how life is going to be with a celebrity. When you're friends and you're talking, you don't really think of such things, but when you're talking about marriage then it's a little different, you think about things from a different angle.” She had also said in an interview, “After one year, I realised it's going to be really big (the attention). But when I met him met him, it was just about getting to know him as a person. His simplicity really attracted me. He's a very simple guy.” 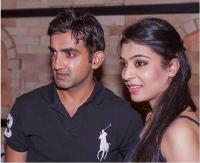 Talking about his decision of getting married to his now wife, Natasha, Gautum Gambhir once said, “The most important thing was to find a girl who has a good head on her shoulders, because -- as I've always mentioned -- when you get married to someone who's a public figure, it's very important to be down to earth. Because it's easy to get carried away; you'll have a lot of comforts, but it's important to have a good head on your shoulders to keep you grounded. And I think I've got the right person.” He had further added, “The best part about her is that she doesn't discuss cricket with me. I play too much cricket, so I don't want to come back to the room and again discuss cricket.” 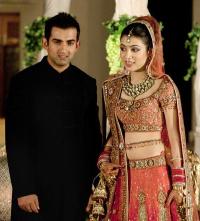 Gautam Gambhir had further added, “My only decision was to get married after the 2011 World Cup. Obviously, we'd known each other before that, but I wanted to play the 2011 World Cup because that was my first 50-over World Cup and I wanted to do really well. Luckily, we won, and I was the highest run-getter. We'd already decided to get married, but my only condition was after the World Cup.” (Also Read: Aishwarya Rai Bachchan Shares A Portrait Of Her Late Father, Krishnaraj Rai On His Death Anniversary) 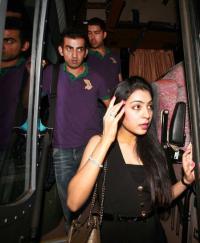 Isn’t this amazing? Tonnes of congratulations to Gautam Gambhir for winning the prestigious Padma Shri Award!