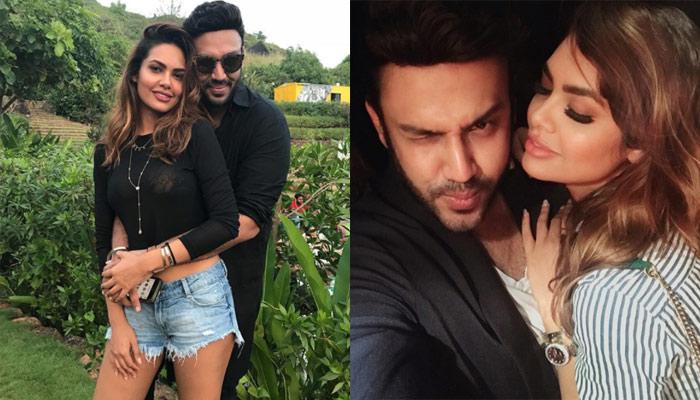 She is sexy, our very own desi version of Angelina Jolie. We are talking about Rustom fame, Esha Gupta, who is known more for her glamorous photoshoots and sizzling looks, than her acting skills. Esha is in news again, but not for any of her photoshoots. The reason is all the buzz around her love life and the alleged engagement! Yes, according to the gossip mongers and her Instagram stories, Esha is ready to exchange rings with her designer boyfriend, Nikhil Thampi. (Also Read: Raghu Ram Is In Love With Eijaz Khan's Ex, Natalie Di Luccio; Posts Anniversary Message For Her)

Well, we are not claiming anything, but it is Esha herself who created all the mystery and buzz around her engagement when she posted a few stories tagging designer Nikhil Thampi, whom she addressed as her “boyfriend” in one of her previous Instagram stories. The two also went for a date night on Valentines Day, sparking the rumours further. (Also Checkout: 19 Beautiful Bollywood Actresses And Their Real Life Mehendi Look)

So, Esha posted the above picture with Nikhil in one of her stories and wrote, “@nikhilthampi m ready…cmon now (sic)”. It also had three emoticons, a ring, laughter and a heart. It was these emojis that created a buzz and suggested a soon-to-happen engagement with Nikhil. All those people who follow Esha’s Instagram stories closely know that it was recently only when she addressed Nikhil as her boyfriend by writing a caption that read, “All the best for today boyfriend @nikhilthampi”.

Check out the screenshot of the posted story below.

Wait, before you also conclude and think that these two are in love and are soon getting engaged. Hearing from the horse's mouth, there is no truth behind the news of Esha and Nikhil’s engagement. Esha and Nikhil are best of friends and they keep teasing each other with such harmless jokes, every now and then. (Check out Shloka Mehta: Everything You Need To Know About Akash Ambani's Fiancee And How They Met)

Esha herself took to her Instagram to clear the air about her engagement news. She posted the above picture with Nikhil and captioned it, saying, “Ok guys he is one of my closest best friend. we love each other, as friends. JUST FRIENDS..he’s one of my bffs n m very lucky to have him.. @nikhilthampi why don’t you love me back eh? Anyways hope this clarifies all the media reports..also, find me a man someone been single forever.. thanks.”

We would love to see you get hitched soon, Esha. Hope you find the man of your dreams in the coming days!

Next Read: Television Couple Hina Khan and Rocky Jaiswal Are Enjoying Their Dubai Vacation, Pics Inside!