Esha Deol has performed again with her mother, Hema 'ji' for Ganpati show 2020, and she talked about how her daughters, Radhya and Miraya used to join them for dance practice. A mother makes sure that she spends most of her time with her babies, while taking utmost care of her parents. It is like balancing two age groups at the same time. When a girl gets married and starts her family, it gets difficult for her to create a balance between her parents and her new family. And amidst the balancing act, often every women tend to forget their hobbies and the things they used to love. However, Esha Deol Takhtani is a prime example of balancing her relations and yet finding time for the one thing she loves, dancing. (Also Read: Ankita Bhargava And Karan Patel Play With Their Baby, Mehr, She Pens A Poem For Her Family Of Three)

Just like her mother and veteran actress, Hema Malini is known for her dancing skills, Esha too performs and is trained in classical Bharatanatyam by her mother. Esha is also trained in the Odissi dancing style under Mumbai guru Rabindra Atibuddhi. Hema Malini’s daughters, Esha and Ahana Deol are both trained classical dancers, and whenever the trio performs together, they set the stage on fire. And now, as Esha Deol has performed again with her mother, Hema ji for Ganpati show 2020, she talked about how her daughters, Radhya and Miraya used to join them for dance practice.

In a conversation with E-Times, Esha talked about how she feels dance is a spiritual connection between her mother and her and how her daughters are ready to take this tradition forward. She shared how she used to rehearse for her performance and her daughter, Radhya would join in tying the dupatta in the same manner. She said, "Mom and I would rehearse around 4 pm in our salwar kurtas and Radhya would be ready before us, in the same attire, with the dupatta tied in exactly the same way. She is eager to learn dance and during every rehearsal she was doing her own thing. As for Miraya, she can already recite the classical taal. In our family, there is no escaping dancing." She further acknowledged that she is confident that soon, she will be dancing with her daughters, Radhya and Miraya.

This is the first time that Esha had collaborated with her mother, Hema ji again after giving birth to her second daughter, Miraya in June 2019. Talking about the same, she shared that she had taken just five months break when her elder daughter was born, this was her chance to learn something new. She jokingly said, “Even after (elder daughter) Radhya was born, I took just five months to get back to dancing. This time, it was a chance for me to learn something new and also see if I could fit into my costume after two babies."

When asked how did it feel to perform again with her mother, she recalled that this time they had rehearsed over video calls, and despite the distance they were in perfect sync. She said, “Wonderful, though this time all our rehearsals were happening over video calls, so it was pretty different. After several days of rehearsals, the camera team came and shot our performance at home with just the two of us. The background dancers performed separately on the studio set."

After 5 months break post delivering her first child, Esha had gone back on-stage with her mother, Hema Malini at Siri Fort Auditorium, Delhi. On March 17, 2018, Esha and Hema ji had performed in Delhi and Esha had posted a picture and a video from the event. She had captioned them as “First Classical dance performance after a long time, today at Delhi Siri fort auditorium! Gratitude!!! With @dreamgirlhemamalini”. Even the dream girl of Bollywood, Hema Malini had shared the glimpses from the event. (Don't Miss: Rhea Chakraborty Had Texted Mahesh Bhatt After Leaving Sushant, Said, 'Your Love Had A Deep Impact')

Before the birth of her granddaughter Radhya Takhtani, Hema Malini had expressed her wish to teach Bharatanatyam to her granddaughter if Esha delivers a baby girl. In an interaction with Indian Express, Hema ji had remarked, “I am just waiting for Esha’s baby! I already have my little guardian (Ahana’s son, Darien), he is a wonderful kid, my grandson! He is very fond of everybody in the family, but I like to believe that we both have a special bond. I like to make sure that kids have a little spiritual inclination, so Darien folds his hands and wishes people, has prashad I offer my Laddu Gopal (God idol). I don’t know if they will believe in God as they will grow up, he, of course, doesn’t understand spirituality now, but it is beautiful to see my grandchildren growing up so well. If Esha has a boy, I will have one more grandson, and she has a girl I will definitely teach her Bharatanatyam!” (Don't Miss: Puja Banerjee And Kunal Verma's Pregnancy Shoot, Happy Parents-To-Be's Excitement Knows No Bound)

We would love to watch Hema ji, and Esha perform with Radhya and Miraya someday! 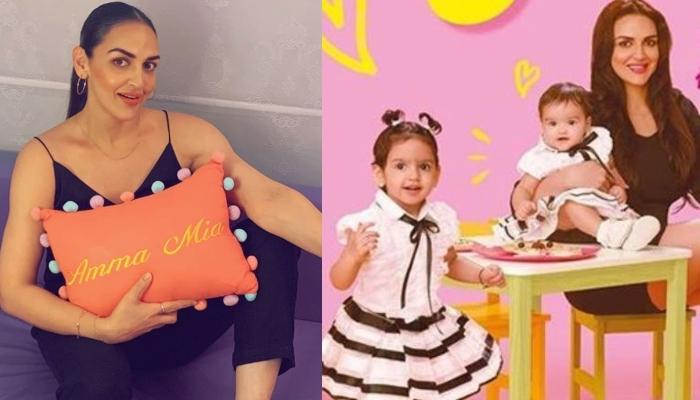 When we are asked about whom we consider as our idol, most of us would name a celebrity. But the truth is that no matter how many idols we might have on-screen, the most inspiring ones would be the ones around us, our family and friends. For parents, it is