Esha Deol delighted her fans with a beautiful picture of her hubby, Bharat Takhtani and their two-year-old angel, Radhya Takhtani, wherein the father-daughter could be seen adoring each other.

As cliched as it may sound, but a father is his daughter’s first love and no matter how many men come and go in her life, no one can ever take his place in her life. Being her guiding light throughout her life, from the first steps she takes to eventually turning into an independent woman, a father gives his daughter the wings to fly! Such is the relationship between Bharat Takhtani and his little girl, Radhya Takhtani. (Also Read: Sara Ali Khan Gets Nostalgic, Shares Childhood Pictures That Prove She Was Always A Star)

Esha Deol and Bharat Takhtani had embarked on their journey of ‘happily ever after’ on June 29, 2012, and with the arrival of the two little angels, Radhya Takhtani (born on October 20, 2017) and Miraya Takhtani (born on June 10, 2019) in their ‘la la land’, their family got completed. In an interview with the Mid-Day, Bharat had talked about his daughters’ resemblance and had stated, "I am a happy and proud father. Miraya looks like Esha, and Radhya looks like me. So, I am glad that we have babies who resemble us." A while back, Esha Deol delighted her fans with a beautiful picture of her hubby, Bharat Takhtani and their two-year-old daughter, Radhya Takhtani. Radhya could be seen cuddled in her daddy’s arms, as Bharat couldn’t stop adoring his little angel. While Bharat looked dapper in a black kurta paired with a beige-coloured bandhgala jacket, baby Radhya looked pretty in a red-coloured lehenga. Esha captioned her post as “Her first love... Every daughter's first love is her father... to all you Dads out there be the best example of the most chivalrous, dignified & strong man .... not just physically but mentally too and set such an awesome example of what your daughter will in the future match up every man she meets to! Remember ur her first and u all have a huge responsibility towards your daughters!!!!! #fathersanddaughters #daddyslittlegirl #myfathermyhero #radhyatakhtani @bharattakhtani3.” On November 2, 2019, Esha Deol had turned 38 and the Dhoom Machale star had ringed in her birthday with her hubby, Bharat Takhtani and shared her cake-cutting video on her Insta story. Esha and Bharat had twinned in black for her birthday celebrations. Esha had also received a sweet surprise from her star parents, Hema Malini and Dharmendra. It was the birthday girl herself, who had given her fans a glimpse of her ‘flowery’ morning surprise from her parents, which were bouquets with a handwritten note. While her ‘Dream Girl’ mommy had written, “Darling Esha, Happy birthday. Many many happy returns of the day. Love and blessings, Mumma”, her doting daddy had penned, “Happy birthday Esha. Lots of love, Papa.” (Also Read: Amitabh Bachchan Completes 50 Years In Indian Cinema, Abhishek Bachchan Shares A Heart-Melting Post) 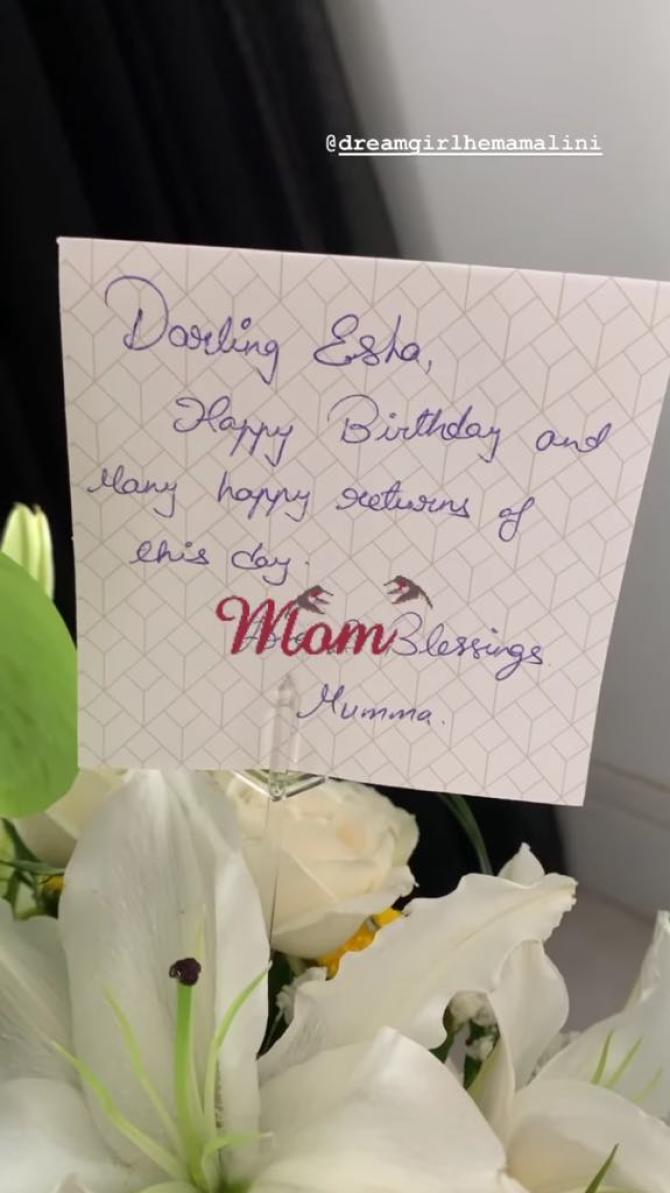 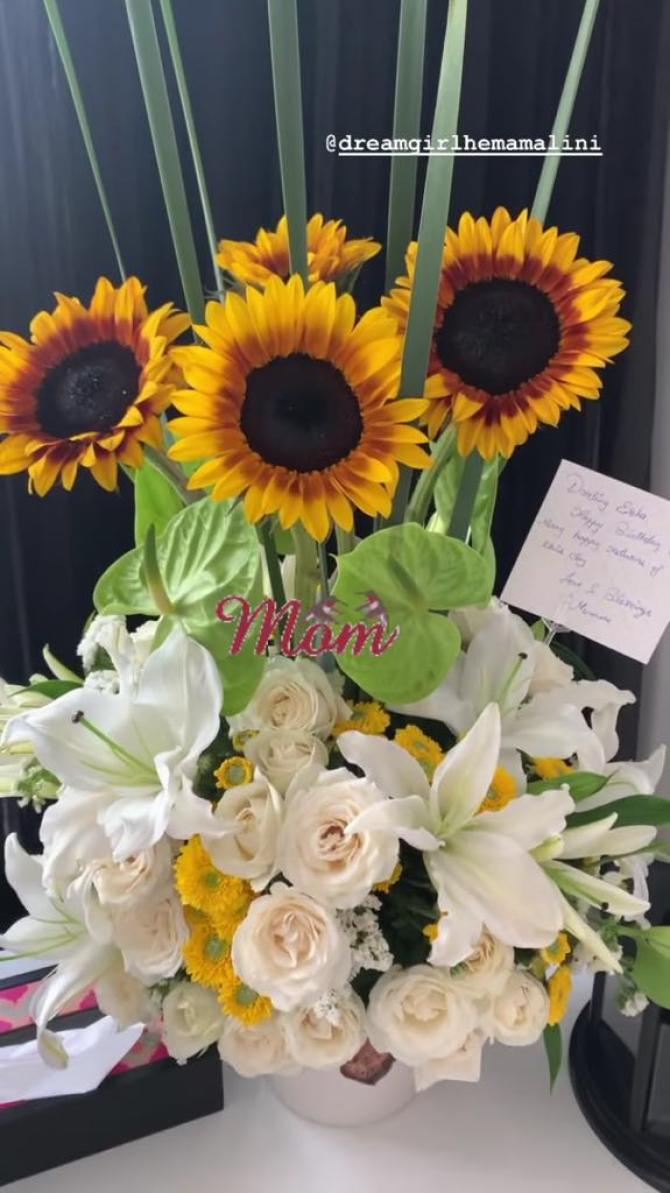 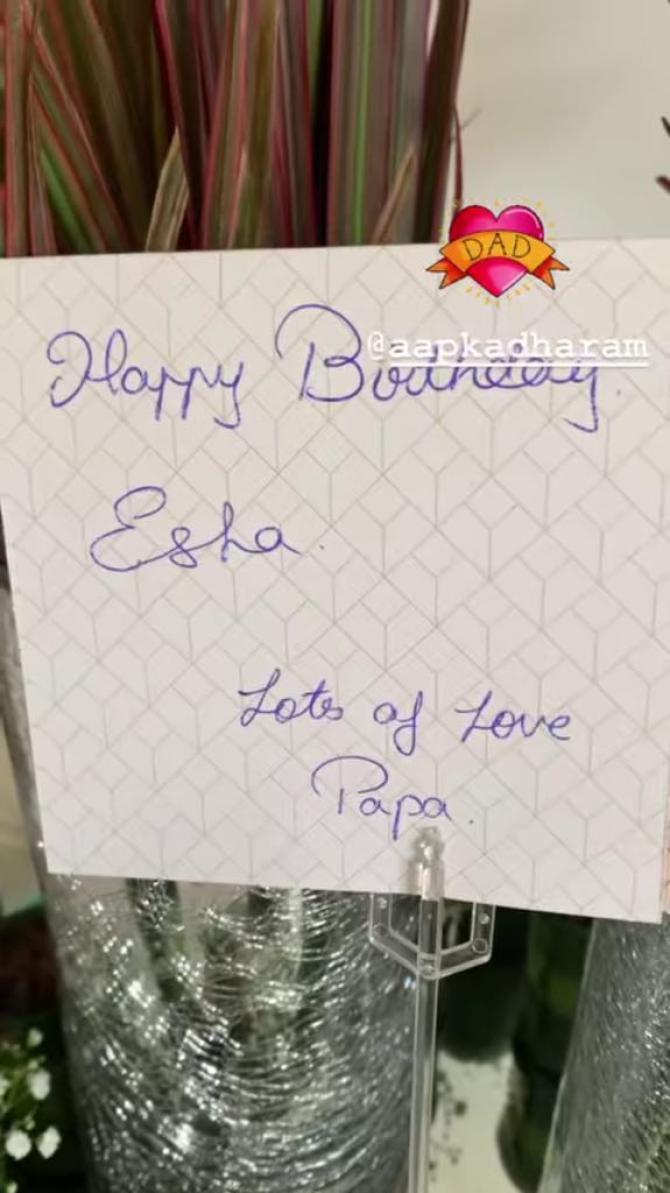 It was on October 20, 2019, when Esha Deol had introduced her five-month-old daughter to the world. On her eldest one, Radhya Takhtani’s second birthday, Esha had made a family appearance with her hubby, Bharat Takhtani, mother, Hema Malini and her two angels, Radhya and Miraya. Esha had posted a family picture on her Instagram and had written, “Radhya’s birthday party a big thank you to all my friends & family for spending this special day with us! And thank you to everyone for the loving birthday wishes & blessings for our baby Radhya! @bharattakhtani3 #radhyatakhtani #mirayatakhtani #decorby @thedramaqueen2012.” 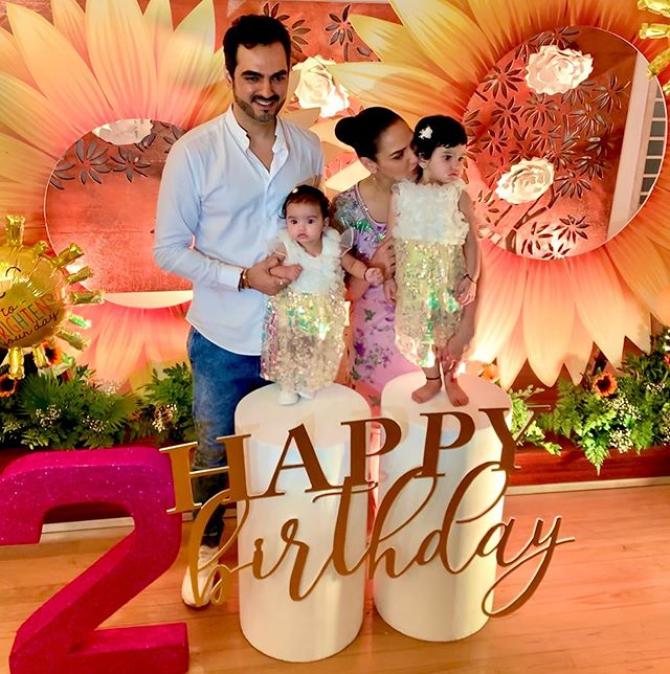 7 years ago, Esha Deol and Bharat Takhtani had gotten married on June 29, 2012, and their love and affection towards each other only seem to be increasing with each passing day. And guess what? There's no better gift than your little kiddies showering their love upon you with the sweetest of gestures! And thus, Esha had taken to her Instagram story and had posted an adorable picture of the gift that her two teeny-weeny daughters, Radhya and Miraya had gifted their parents on their wedding anniversary. Esha had shared a picture of beautiful peach and red rose bouquet with a note that could be read as, "Darling Amma & Dadda, Happy anniversary! Love, hugs and kisses, Radhya and Miraya." After welcoming their first daughter, Radhya Takhtani in their lives, Esha Deol had revealed her feelings of embracing motherhood, and had stated, “Mamma loved doing things for Ahana and me, and today I understand that sense of joy when I dote and fuss over my little one. It is something that makes you feel complete as a mother. Beautiful Radhya fills up my days and nights. Both Bharat and I are extremely fortunate to be blessed with her in our lives. Radhya is bubbly and always smiling. Sometimes she does mischievous things that instantly bring back memories of my own antics as a child.” (Also Read: Taimur Ali Khan Can't Let Go Of His Drink As He Poses With Kareena, Saif And A Fan At A Restaurant) 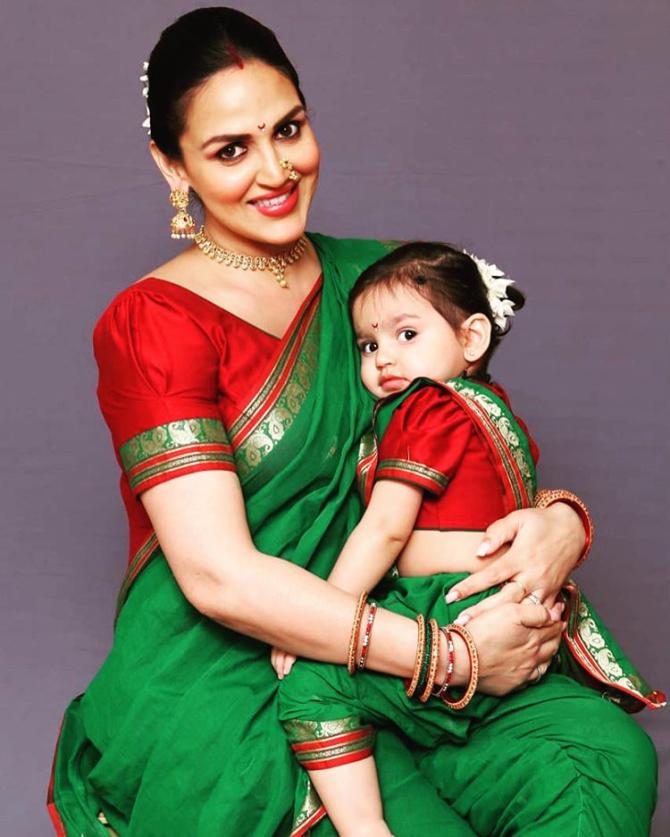 Isn’t Bharat and Radhya’s picture, a sight to behold? 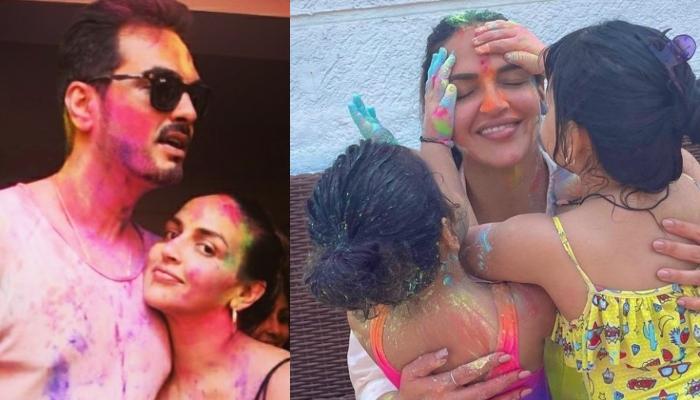 Veteran actors, Hema Malini and Dharmendra’s daughter, Esha Deol, got married to the love of her life, Bharat Takhtani, on June 29, 2012. In October 2017, Esha and Bharat had embraced parenthood for the first time and had welcomed an angel, whom they have named Radhya. In June 2019, Esha and