Esha Deol turned 38 today and it was her parents, Hema Malini and Dharmendra's sweet surprise for their 'little girl' that touched our hearts. Scroll to see how they made the day special for her.

Esha Deol, daughter of Dharmendra and Hema Malini, had decided to take forward her star family’s legacy with her debut in Bollywood with the film, Koi Mere Dil Se Poochhe. In her 17 years of career, Esha had her own share of ups and downs but it wouldn’t be wrong to say that she did create a niche for herself in the industry, all by herself. Esha had tied the knot with her childhood friend, Bharat Takhtani and is now a mother of two - Radhya Takhtani and Miraya Takhtani. And post the birth of her firstborn, she had made a comeback with a short film, Cakewalk, for which she had received good reviews and accolades. (Also Read: Nita Ambani's Perfect Traditional Looks For The Mother Of A Bride Or Groom To Take Inspiration From)

Esha Deol turned 38 on November 2, 2019, and to make her day extra-special, her friends and family flooded her with beautiful wishes. Esha’s sister, Ahana Deol Vohra posted a super-gorgeous picture with the birthday girl, and wrote, “Happy birthday to my first bug. Love you unconditionally. Thank god for giving me you as my sibling” followed by a heart emoji. Esha ringed in her birthday with hubby, Bharat Takhtani and she shared her cake-cutting video on her Insta story. Esha and Bharat had twinned in black for her birthday celebrations. 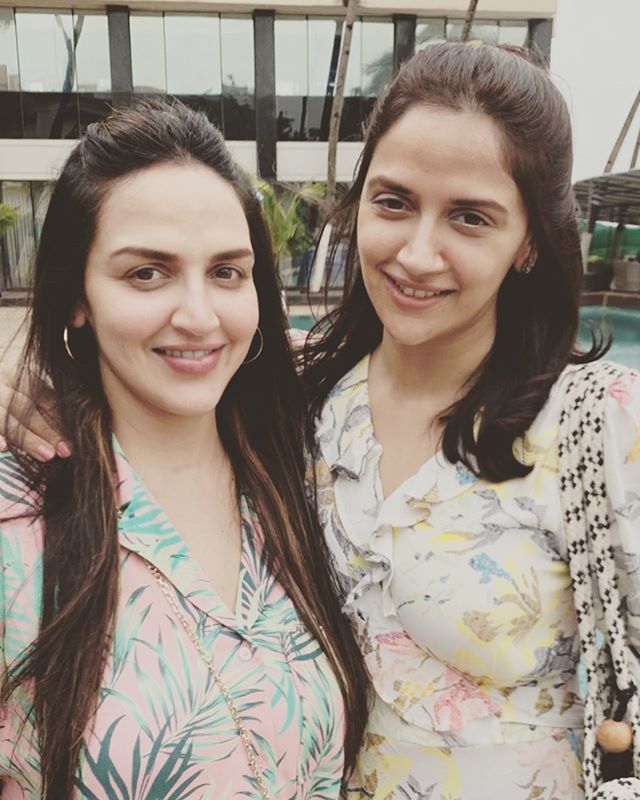 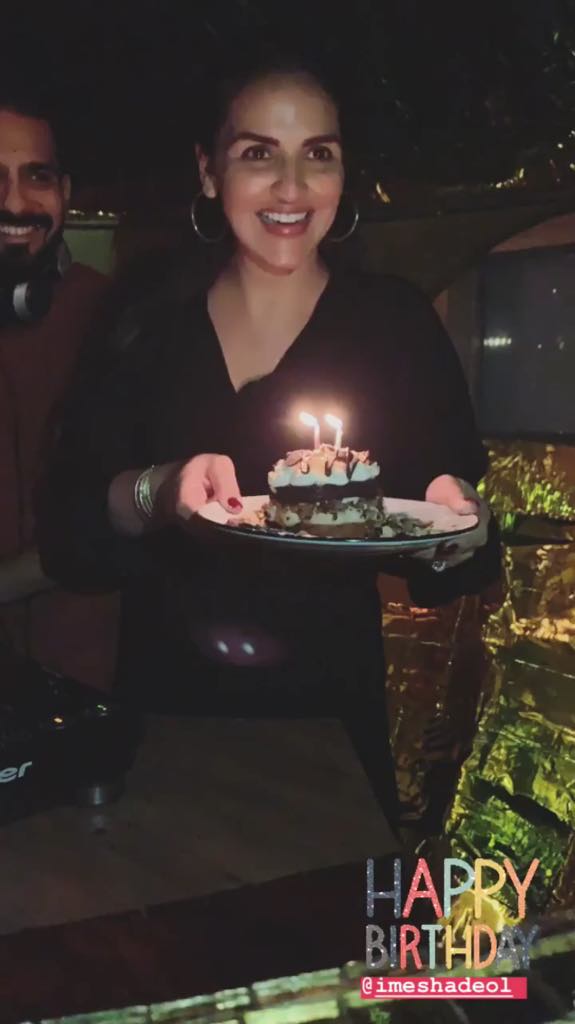 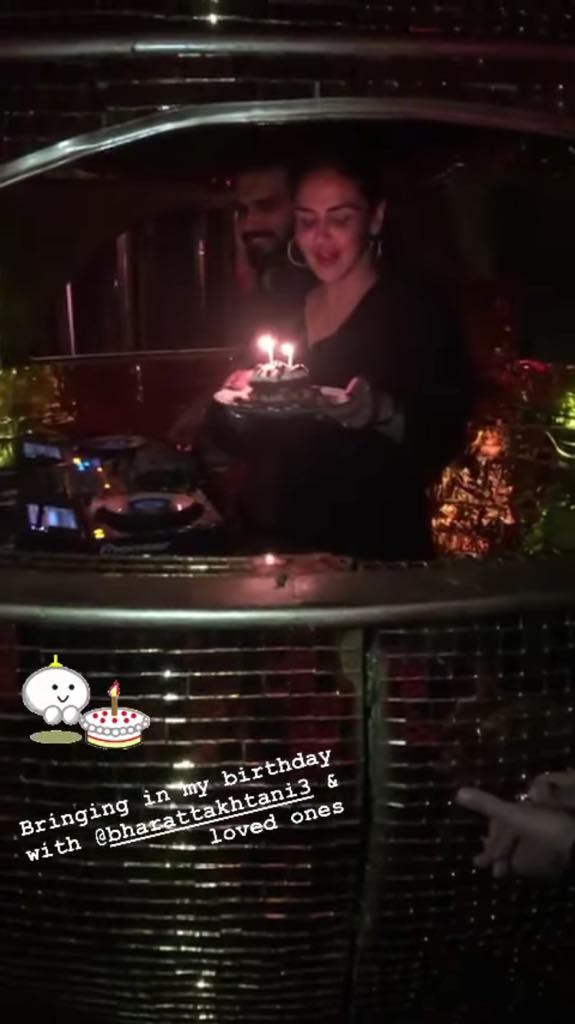 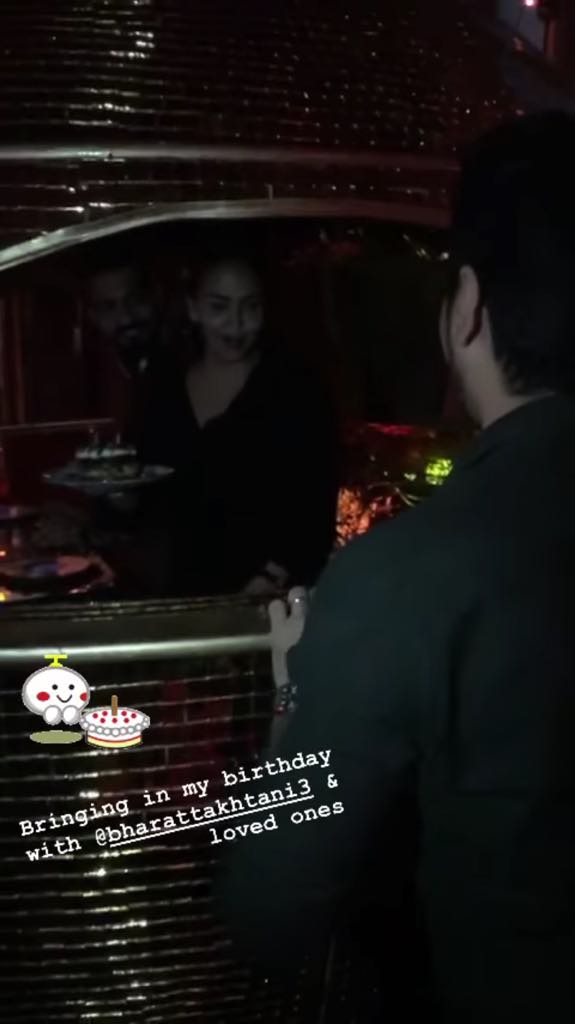 But amongst the wishes and birthday celebrations, it was her parents, Hema Malini and Dharmendra’s sweet surprise for their ‘little girl’ that had touched our hearts. It was the birthday girl herself, who gave a glimpse of the ‘flowery’ morning surprise from her star parents, which are bouquets with a hand-written note. While her ‘Dream Girl’ mommy wrote, “Darling Esha, Happy birthday. Many many happy returns of the day. Love and blessings, Mumma”, her doting daddy wrote, “Happy birthday Esha. Lots of love, Papa.” 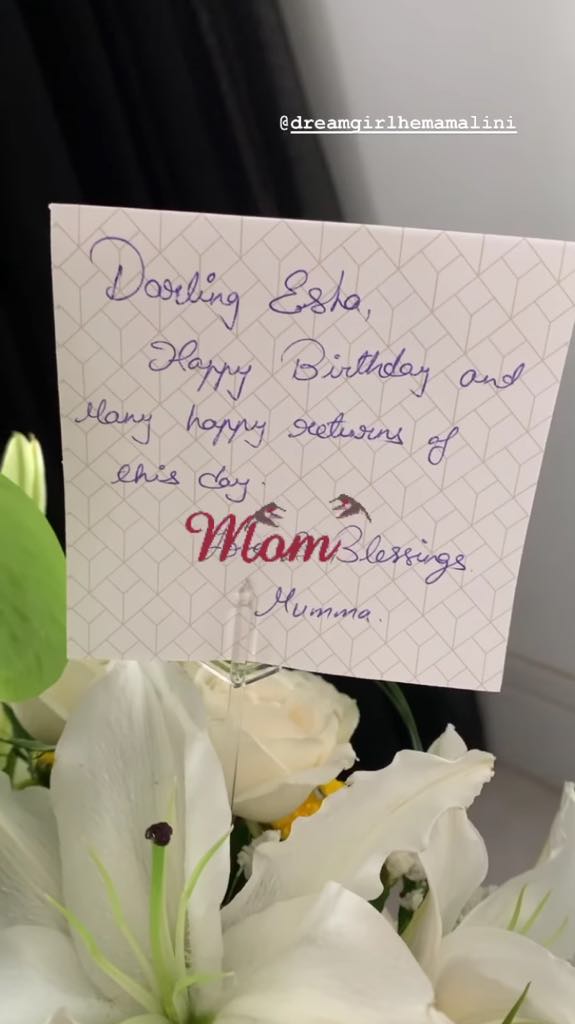 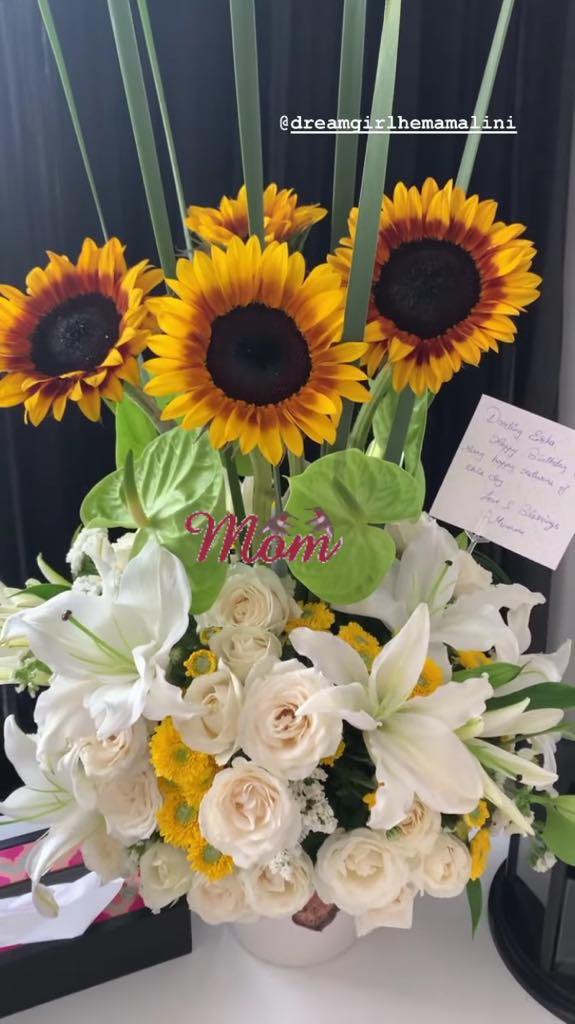 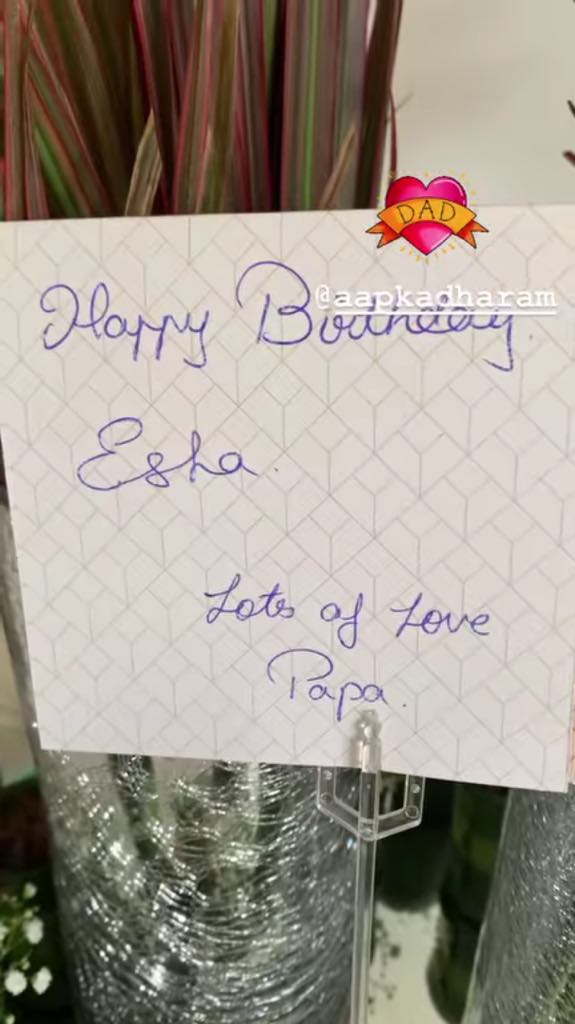 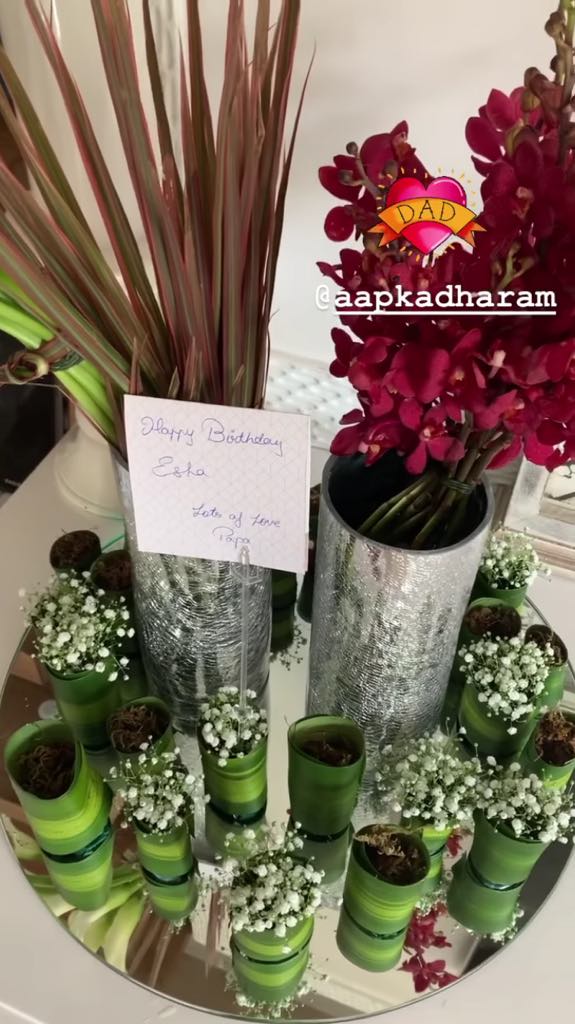 Esha Deol’s best friend, Shilarna Vaze a.k.a., Chef Chinu also posted a throwback picture to wish her BFF. Shilarna’s birthday wish for Esha could be read as “@imeshadeol you are literally the closest thing I have to a sister. And as @a_tribe & @tashajitender know, you only drive your family crazy! I just want you to know I'm always here to hold your hand like you have held mine since those school trips and Pizza Express and HQ and binge watching Friends & SATC and Vegas and London and Goa and Hong Kong and pregnancy nausea and post partum weight loss and fights with boyfriends and husbands and mothers and work related and nanny advice. I love you and I love your babies like my own.” (Also Read: Aishwarya Rai Bachchan Is Her In-Laws' 'Aankhon Ka Tara', Proved That She Is A Great Bachchan Bahu) To Shilarna Vaze’s post, Esha Deol commented, “My rainbow, you know how much I love you & yes we are sisters who love each other & also fry each other... today I want to say something that probably was supposed to be said over lunch (lol which has not yet happened) is that... I miss u, I love you and I want to see u more often!!! Love u love Chris love zanu & love your parents like my own!!! Peace love & it’s time to Rocknrolla.” Chinu replied, “@imeshadeol made me cry”. Esha Deol had a super-amazing year and is on cloud nine as she had embraced motherhood for the second time with the arrival of her little angel, Miraya Takhtani. It was on October 20, 2019, when Esha had introduced her newborn daughter to the world. On her eldest one, Radhya Takhtani’s second birthday, Esha made a family appearance with her hubby, Bharat Takhtani, mother, Hema Malini and her two angels, Radhya and Miraya. Esha had posted a family picture on her Instagram and had written, “Radhya’s birthday party a big thank you to all my friends & family for spending this special day with us! And thank you to everyone for the loving birthday wishes & blessings for our baby Radhya! @bharattakhtani3 #radhyatakhtani #mirayatakhtani #decorby @thedramaqueen2012.” 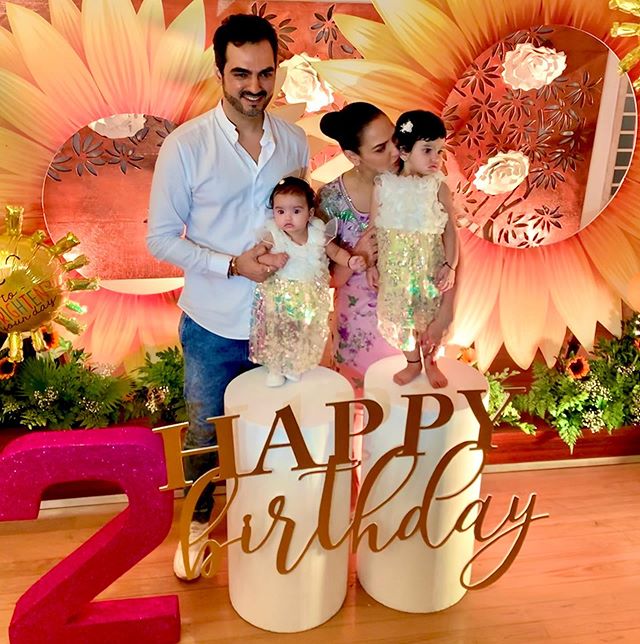 On October 12, 2019, Bharat Takhtani had turned a year older and his doting wife, Esha Deol had taken to her Instagram to share a glimpse of his birthday celebrations. Twinning in black, Esha could be seen feeding the birthday boy with a piece of the cake in her Insta story and had written, “Happy birthday. Love you! @bharattakhtani3” atop it. Esha had also posted a dapper picture of her husband on Instagram and had wished him with a simple caption which could be read as “Happy birthday I love u! @bharattakhtani3.” (Also Read: Inside Pictures From Aishwarya Rai Bachchan's 46th Birthday Celebrations With Abhishek And Aaradhya) 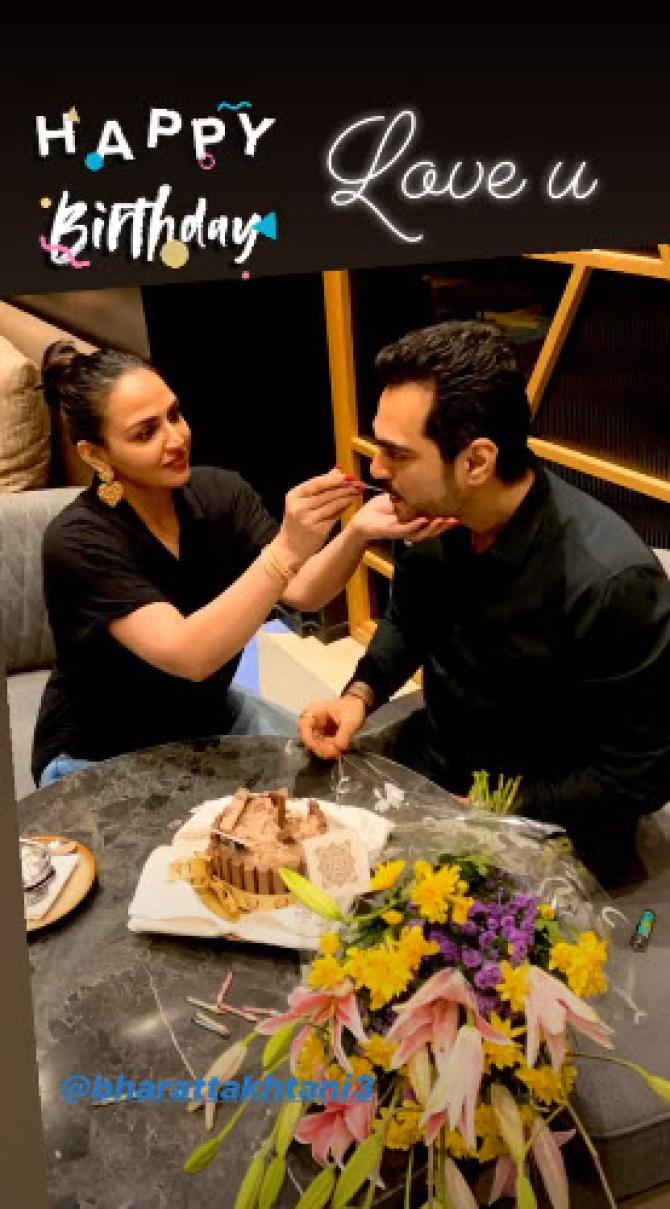 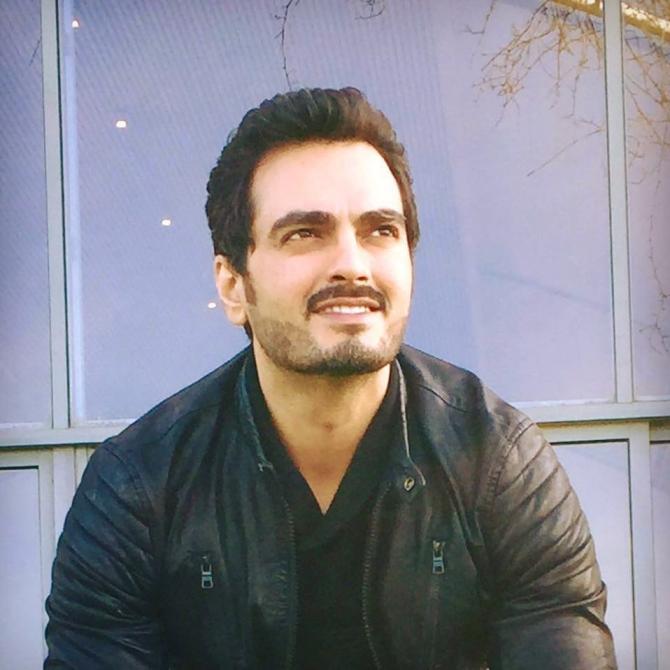 Here’s wishing Esha Deol a very happy birthday! Can’t wait to get a glimpse of her birthday celebrations with daughters, Radhya and Miraya. 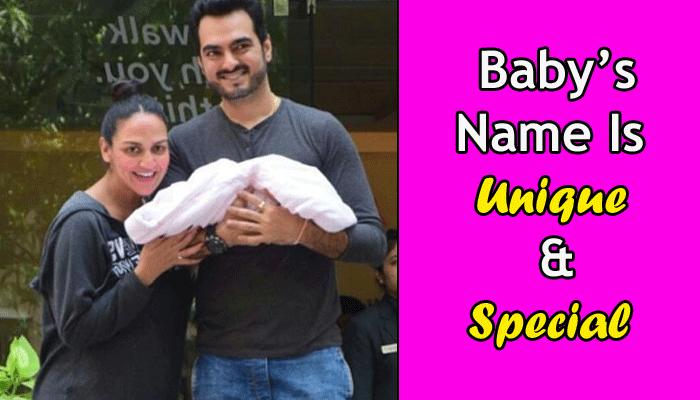 Hema Malini and Dharmendra’s eldest daughter, Esha Deol has now joined the parents squad of 2017 with the arrival of her daughter on October 20, 2017. As this year is proving lucky for many celebs, it has proved luckier for Esha and Bharat. Recommended Read: Nawaz Reveals About 1st Failed Marriage And