Ekta Kapoor dotes on her son, Ravie Kapoor. On March 20, 2020, Ekta shared a sketch of herself with Ravie and gave us a glimpse of how she is spending time with him amidst COVID-19 lockdown. God can't be everywhere so he created mothers, who not only imbibe good values in her kids but also make sure to fulfill their every demand. For every woman, the phase of motherhood is the most cherished one. She eagerly waits throughout the nine months to hold her baby close to her heart. With times the concept of motherhood has only broadened, women no longer restrict themselves to conceiving naturally and are opting for surrogacy and adoption to become a mother. Soap opera queen, Ekta Kapoor had embraced motherhood when she had welcomed her little boy, Ravie Kapoor through surrogacy. (Also Read: Aayush Sharma Spends His Quarantine With Arpita Khan Sharma And Kids, Ahil Sharma And Ayat Sharma)

On January 27, 2019, Ekta Kapoor had welcomed her baby boy and on January 31, 2019, she had taken to her social media handle and had confirmed the news of her baby’s arrival. Ekta, who shares a warm bond with her daddy, Jeetendra had decided to name her son after him and hence opted for the name Ravie Kapoor. After the arrival of Ravie, Ekta is on cloud nine and has beautifully managed to juggle her time between work and family.

Amidst the outbreak of Coronavirus and lockdown, everyone is making the most of their time with their loved ones and Ekta Kapoor also gave us a glimpse of her quarantine. She took to her Instagram handle and shared a sketch of herself with her son, Ravie Kapoor. Along with the picture, Ekta wrote, “My partner in quarantine!! As we cross all drama nos on #mentalhood I share my mental mom moment!!! True love is beyond logic! To moms from a mom ...stay safe!”

In an interview with The Times of India, Ekta had shared that she takes Ravie along with her to the office and spends time with him. It is only when there is any problem that she has to go to the sets, otherwise, her team is there to manage things. She was quoted as saying, "Being a working mother, one has to manage things." She had even described Ravie's cute moments and had said, "I checked his chart and got to know that he has a high temper. People think am short-tempered, but he is the one." (Also Read: Alia Bhatt Turns Muse For Her 'Favourite Photographer' Ranbir Kapoor And Shuns Their Breakup Rumours)

In an interview with News 18, Ekta had recalled her reaction when she got to know that she is going to be a mom. Sharing her emotions, Ekta had stated, “When I knew that the surrogate had conceived, and it was on June 7. On my birthday I got to know. I was a bit overwhelmed. I was like 'Okay this is happening. This is going to be a huge responsibility. I just wrote a show out which is going to be with an A-list Bollywood actress. It's called Mentalhood. It's about motherhood and every time we did the scripting about the Momzillas and the pressure you go through, the guilt you go through, tiger moms, helicopter moms, I was constantly feeling overwhelmed. But now I have realised that I have a lot of guilt even now.”

In an interview with journalist and film critic, Anupama Chopra for the chat show, On the Move, Ekta Kapoor had talked about a working mother’s guilt and had stated, “I have a lot of guilt even now. I don’t know how it just comes. I think the first thing you feel as a mother is guilt. I don’t think anyone will say that so openly. I am at work, I am feeling guilty; I am at home, there’s a lot of guilt that I am not completing a lot of things that I used to normally do. So, it’s like you are only dealing with various kinds of guilt.” (Also Read: Vishal Aditya Singh Opens Up On His Current Equation With Ex, Madhurima Tuli After 'Bigg Boss 13')

What do you think about Ekta and Ravie’s sketch? Let us know! 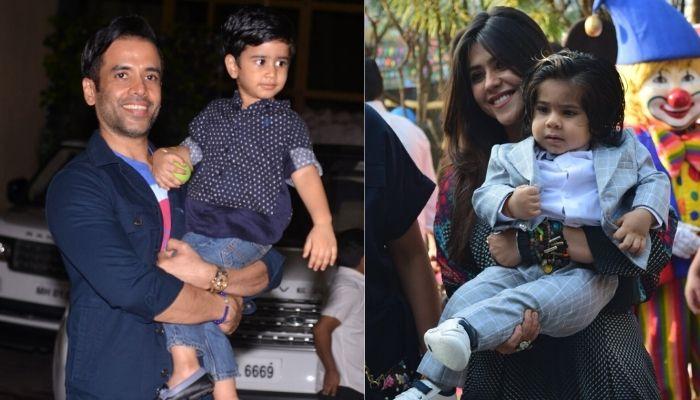 We are growing past the stage where surrogacy, IVF and adoption used to be a taboo and hullaballoo. These notions have now transformed into heart-warming smiles, all thanks to our beloved celebrities. From Shah Rukh Khan’s AbRam to Sunny Leone’s Nisha, Asher and Noah Webber, from Tusshar Kapoor’s Laksshya to Ekta Kapoor’s