Divyanka Tripathi Dahiya and Vivek Dahiya opted for an eco-friendly visarjan of Lord Ganpati and immersed their idol in a bucket of water at their home. Check out the video of their Ganpati visarjan. 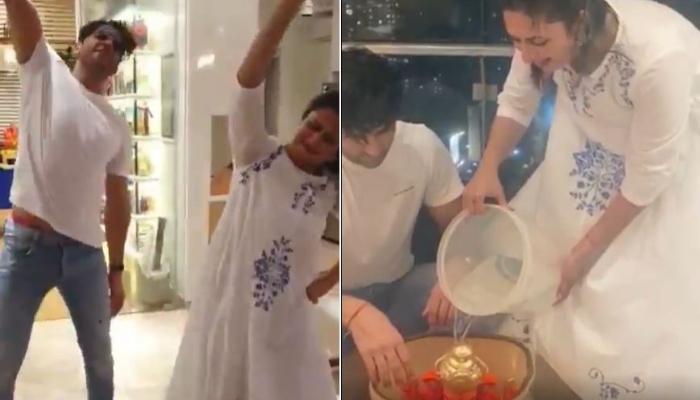 Tujhko Phir Se Jalwa Dikhana Hi Hoga, Agle Baras Aana Hai, Aana Hi Hoga, Dekhengi Teri Raahein, Pyaasi Pyaasi Nigahein, Oh Morya Morya Morya Re, Bappa Morya Morya Morya Re… With a smiling face and immersed in colours in the roaring beats of dhol, every year we bid adieu to Lord Ganapti and hope to welcome him next year with same fervour and grandeur. And when it comes to celebrations, there’s no match how celebrities come forward to celebrate a festival but this year, without the pomp and show, Ganesh Chaturthi festivities have been a low-key one for everyone. From B-town to telly world, everyone welcomed Lord Ganpati at their homes and bid adieu in an eco-friendly way. Divyanka Tripathi Dahiya and Vivek Dahiya were no different. (Also Read: Trishala Dutt Sends Prayers On Maanayata Dutt's 'Sands Are Shifting' Post Of Twins Shahraan And Iqra)

For Divyanka Tripathi Dahiya and Vivek Dahiya, Ganesh Chaturthi 2020 was a special one as they had welcomed Lord Ganpati at their home for the first time. It was in February 2020 when Divyanka and Vivek had moved into their new home in Lokhandwala. And their happiness knew no bounds as they had welcomed Lord Ganesha for the first time and left no stone unturned to make it a memorable festival. Last year, Divyanka and Vivek had travelled to Chandigarh to celebrate Ganesh Chaturthi at the latter’s home and sharing a picture with his sister, Riya Dahiya, the Banoo Main Teri Dulhann fame had written, “Ganpati ji at our family home.” 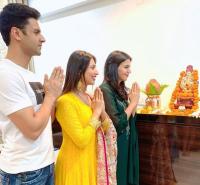 Divyanka Tripathi Dahiya and Vivek Dahiya opted for an eco-friendly visarjan of Lord Ganpati and immersed their idol in a bucket of water at their home. Before the final adieu to Lord Ganpati, Divyanka and Vivek have danced their hearts out and coordinated their steps on the chant of Ganpati Bappa Morya. Sharing a video of their Ganpati visarjan, Divyanka wrote, “Our Ganpati Visarjan #EcofriendlyGanpati #VisarjanAtHome #DiveksFirst.”

For Ganpati visarjan last year, Divyanka Tripathi Dahiya and Vivek Dahiya had twinned in white as they had danced on the local streets of India and the former had called it a learning experience on how to live like a free spirit. Divyanka had posted glimpses of the Ganpati visarjan rain dance and had captioned it as “End the day...with #GanpatiVisarjanDance. Living like a free spirit can only be learnt on the local streets of India! #FromDayBeforeYesterday #GanpatiRainDance #OffSeasonHoli.” (Also Read: Salman Khan Playing With Niece Ayat Sharma During Ganesh Chaturthi Celebrations Is Unmissable, VIDEO) 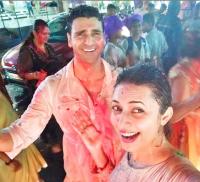 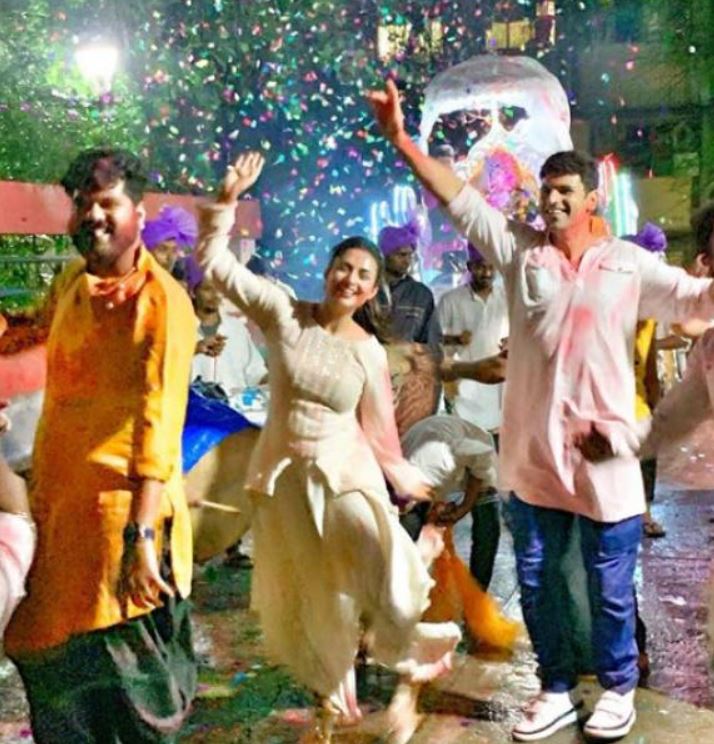 On August 23, 2020, Divyanka Tripathi Dahiya had posted twinning pictures with Vivek Dahiya for the Ganesh Chaturthi puja. Divyanka and Vivek couldn’t stop beaming with happiness as they posed holding each other’s hands. Wishing everyone on Ganesh Chaturthi, Divyanka had written, “They say He comes to you when He wants to. He finds a way. Our Ganu was love at first sight. Stayed with us only a short while giving us positivity and peace for the times to come. Ganpati bappa morya! #EcofriendlyGanpati #DiveksFirst.” Vivek had captioned his Ganesh Chaturthi special post as “Wishing everyone health (with the best immunity) and happiness. To new beginnings, our first. Ganpati bappa morya! #GaneshChaturthi.”

However, it was Divyanka’s Yeh Hai Mohabbatein co-star, Karan Patel’s actor-wife, Ankita Bhargava’s comment that had caught out attention. Karan and Ankita had embraced parenthood a few months back and the latter hope that Divyanka and Vivek too, welcome their Baal Ganesha by next Ganesh Chaturthi. Ankita had commented, “Having him come over is the most beautiful feeling ever. God bless you guys with more and more happiness! Next year Gannu bhaiya ko company dene ke liye koi Baal Ganesha hona chahiye!” To Ankita’s wish, Divyanka had replied with a sweet yet witty comment, “It's a beautiful start. I'm happy he chose us as well. By, the way, Abhi tumhare baal Ganesha is giving us more joy.” (Also Read: Ekta Kaul Celebrates Her Son, Ved Vyas' First Ganesh Chaturthi At Home With The Kaul Clan [Pictures]) 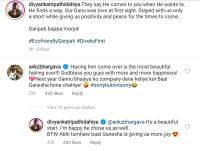 Pandemic or no pandemic, we hope the eco-friendly way of celebrating festivals continues in future too!