Divya Agarwal and Varun Sood are celebrating love in the midst of sand and beaches! Recently, she shared an in-love picture with her Varun, and 'daddy' Sood gave an epic reaction to it. There is no happiness greater than spending some quality time with your love in the midst of sand and beaches! And looks like reality television stars, Divya Agarwal and Varun Sood definitely know how to keep the spark alive in their relationship as they are currently holidaying in the Maldives. (Recommend Read: Ananya Panday's Bestie, Shanaya Kapoor Pens A Heartfelt 'Good Luck' Note For Her Big Bollywood Debut)

But before we take you further into the story, let us take a recap of how love brewed between, Divya and her best-friend, Varun. The duo was struck by Cupid’s sharpest love arrow on the reality show, Ace of Space, which was hosted by Vikas Gupta. The couple had entered the show as friends but eventually, they fell for each other. And, when Varun proposed to her on the show, she immediately said ‘yes’. 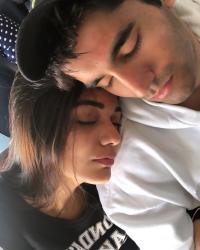 Recently, Divya took to her Instagram to share amazing pictures from their Maldives vacation. In one of the pictures, Divya and Varun can be seen striking a perfect pose for the camera, and she captioned the picture as, “Living In the heaven with @fabgetaways_ & @visitmaldives. Check out the link in my bio to plan your own Maldivian getaway! #FABgetaways #VisitMaldives #SunnySideOfLife #LuxuryTravel #InstaTravel #beautifuldestinations #bestvacations #BeachVacay.” Seeing the in-love snap, Varun’s father, Vineet Sood wrote a hilarious comment that can be read as, “Ur kicking in the wrong direction. The target is behind you”. Take a look at the picture and the comment below: Well, ‘papa’ Sood didn’t stop here, he showed his immense love for his future daughter-in-law in a perfect way. He loaded her vacation pictures with his cute reactions and seeing which we can only say, ‘Team Papa rocks’. Take a look of it all below: 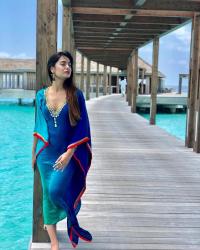 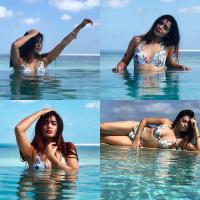 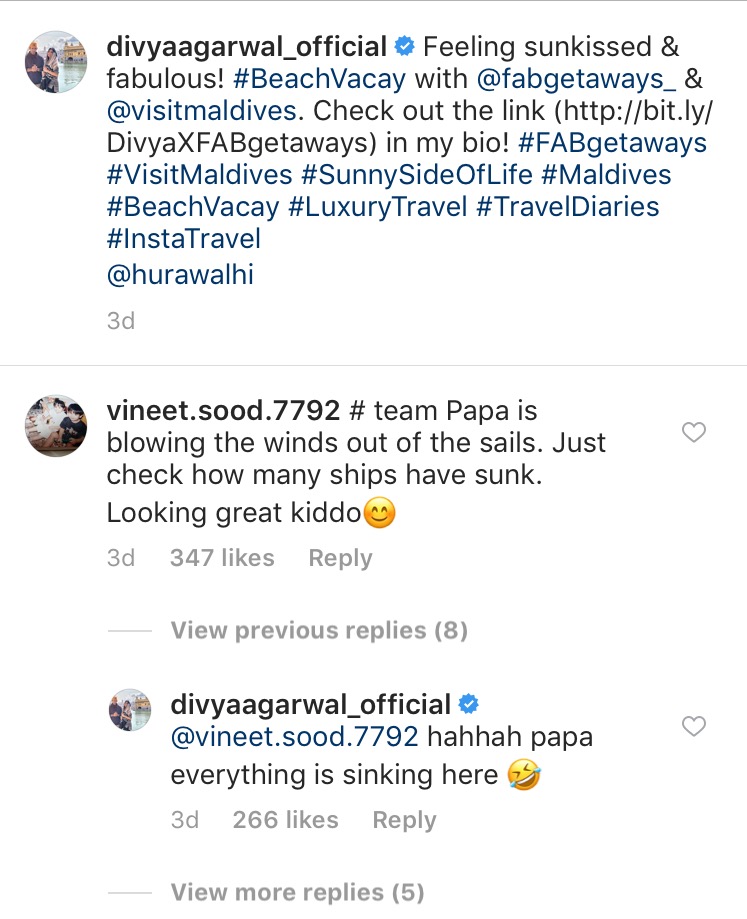 In an interview with the India Today, Divya had talked about Varun, and had said, “I see a future with Varun. I don’t get into things if they are not permanent at all. If I am on something, it’s on forever. It’s never temporary for me. The support, which I was seeking, I am super-lucky to have it. I think every girl seeks for that support system. I was lucky earlier as well, as he has been my best friend and as now he is my boyfriend, I am luckier.” (Also Read: Sreesanth's Daughter, Saanvika's Birthday Bash Was Lavish, We Missed His Sister, Dipika Kakar) 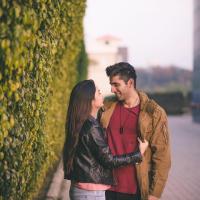 In the same interview, she had also opened up about her past relationship with Priyank, and had stated, “Whatever happened with Priyank Sharma is a part of my journey and my life and it will be counted whenever I will talk about my bad experiences. I am not talking about a third person or another story or with an intention to demean someone. Only thing I would like to say is it’s a part of my life and I will talk about. And, if it wasn’t about a famous celebrity nobody would have cared about it. It was just because he is a known face and our story was famous, and that’s why it was hyped so much. I am very sure if it was unknown, people would have supported me. It’s a part of life. I am glad about whatever happened because right now where I am, I am very happy.” 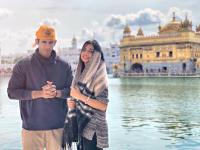 In an interview with SpotboyE, Divya had revealed when she fell in love with Varun, and had shared, “People don't know this but before coming on this show--- Varun and I used to talk to each other for 4-5 hours in the night. I stay in Mumbai and he stays in Delhi, but we used to play 60s ke songs of Mohd Rafi and Mukesh and make each other hear them. So we were anyways very, very close pehle se. In fact I would say we were just misunderstanding each other by calling each other as best friend. The feeling was much more than that, and we realised that only in the show.” (Don't Miss: Unseen Throwback Picture Of Ibrahim Khan Grinning At Camera While Sara And Saif Ali Khan Look Away)

Well, we are going gaga over Divya and Varun's picture, but it is daddy Sood's reaction we are keeping an eye on!