Divya Agarwal Kisses Boyfriend, Varun Sood As His Family Grows, Says Our Family Is Getting Bigger

Divya Agarwal Kisses Boyfriend, Varun Sood As His Family Grows, Says Our Family Is Getting Bigger

Divya Agarwal shared a cute kiss picture with boyfriend, Varun Sood to congratulate him for his growing family. Scroll down to read more! 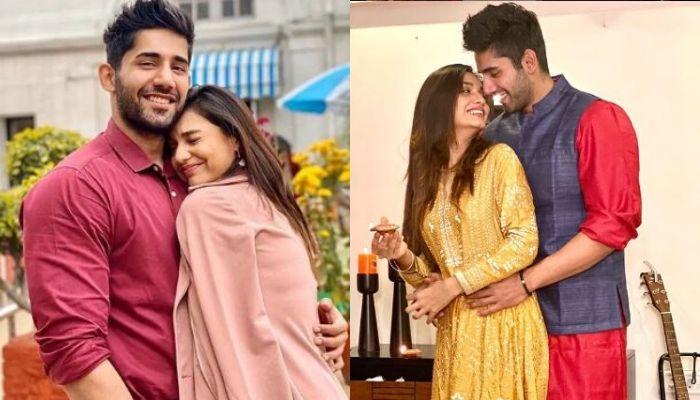 MTV India’s reality show, Splitsvilla is all about finding love and testing your bond. Divya Agarwal and Varun Sood had however participated in the show and had finished the show with other partners, but destiny certainly had its way to make these two lovers meet. From strangers to becoming best friends, sharing common past and breakup to falling in love, the two had started their journey separately, but their fate had a similar story in store for them. (Also Read: Shahid Kapoor Treats Wife Mira Kapoor With 'Best Pasta' As He Cooks For The First Time In Five Years)

Divya and Varun were friends, courtesy to their ugly breakup with their respective spouses, Priyank Sharma and Benafsha Soonawalla. Soon, after all the drama and the closeness of Priyank and Benafsha, Varun and Divya were said to have become best of friends and why not! Having a common past can easily make you friends. The two had entered another MTV India’s reality show, Ace of Space as friends, and it was there only that their love story had started to take off. After all the jealousy, protective streak and care for each other, the two had confessed their feelings for each other and since then, they are growing stronger together.

Recently, Divya Agarwal congratulated her bae, Varun Sood with a kiss as he is extending his family. No, there is no baby involved, it is that Varun has garnered 1.2 million followers on his Instagram account and his better half is excited about this. On June 11, 2020, Divya took to her Instagram handle to share a beautiful picture with boyfriend, Varun Sood. In the picture, Divya can be seen giving a love-filled peck on Varun’s cheeks as he holds some goofy expressions. Along with it, she wrote, “Congratulations my baby for 1.2 million.. our family is getting bigger n better! @varunsood12 #aslihai.” Isn’t it too sweet? Take a look at the picture below:

Divya has been celebrating every occasion of boyfriend, Varun’s life. On April 1, 2020, Divya Agarwal had taken to her Instagram handle and had posted an adorable picture with her beau, Varun Sood. In the picture, we could see Varun sleeping like a child and had looked adorable, while his lady love takes a cute selfie. Along with the picture, Divya had written a few lines for the birthday boy, mentioning that he’s just like a 5-year-old kid and it could be read as “Happy birthday mera bacha!!! Literally to the 5-year-old! Waheguru bless you! @varunsood12.” Take a look. (Don't Miss: Shweta Tiwari And Abhinav Kohli Are Not Separated And Are Living Together, The Latter Reveals It All)

Talking about their love story, Divya is head-over-heels in love with Varun and had revealed that he is her support system. While confirming the news of dating Varun, Divya in an interview with SpotboyE had shared, "Well yes, we are a couple now. We are very much dating. I am glad that I am holding his hand and fighting the world. Our relationship will only get bigger and better and we plan to take it to the next level soon. It will just not stick for fun. Though we haven't discussed all this, I can tell you that we are serious about each other.”

What got Divya and Varun so close to each other? Divya had answered this question and was quoted as saying, "People don't know this but before coming on this show--- Varun and I used to talk to each other for 4-5 hours in the night. I stay in Mumbai and he stays in Delhi, but we used to play 60s ke songs of Mohd Rafi and Mukesh and make each other hear them. So we were anyway very, very close pehle se. In fact, I would say we were just misunderstanding each other by calling each other as a best friend. The feeling was much more than that, and we realised that only in the show." (Recommended Read: Abhishek Bachchan Recalls How He Was Thrown Out From The Sets Of His Father's Film 'Pukar')

Varun and Divya make us believe in pyaar dosti hai!