Bollywood actress, Disha Patani once again proved that she's an ultimate fitness freak as her recent video from her intense workout in the gym left her alleged boyfriend, Tiger Shroff, super-impressed.

One of the hottest, fittest and exceptionally talented actresses in Hindi cinema, Disha Patani, had risen to fame with her Cadbury advertisement in 2015. Being a part of the entertainment industry for 6 years now, Disha has become the national crush with her perfect looks and chiselled physique. With films like M. S. Dhoni: The Untold Story, Baaghi 2, Bharat, Malang, and Radhe in her kitty, Disha Patani is one of the most promising actresses in B-town.

However, not many are aware of the fact that to achieve her fitness goals, Disha works tirelessly in the gym every day. Time and again, she drops snippets from her workout on her social media handles that shows the number of efforts she puts in the gym to become a stunner on the screen. A few moments back, Disha Patani took to her Instagram handle and shared a video from her workout in the gym. In the video, Disha can be seen performing five repetitions of a rack pull that was powered by 80 kgs weight. The actress looked quite comfortable in lifting such an enormous amount of weight, and it speaks everything about her fitness and power. As soon as the video was posted, Disha's alleged boyfriend, Tiger Shroff, dropped a mushy comment on her post as he wrote, "Wonder Woman". However, not just Tiger but his mother, Ayesha Shroff and his sister, Krishna Shroff, also cheered for Disha. While Ayesha commented, "Beast", her daughter and Disha's close friend, Krishna wrote, "You're fireee", followed by three fire emoticons. Along with the video, Disha wrote in the caption:

In an old conversation with Bollywood Hungama, Disha Patani had answered all of the rumours of her relationship in a witty way and had mentioned how she wants to impress Tiger Shroff, but she is having no luck in it. When she was asked about why they don't accept their relationship, the actress had replied: On January 30, 2022, Disha Patani had taken to her Instagram handle and had shared a video of herself practising some insane air flips. She had dished out major fitness goals with her clean moves in the video. Disha had donned a red t-shirt with red shorts and a red knee cap.

But what had caught our attention was how her alleged boyfriend, Tiger Shroff had reacted to her perfect flips. The doting alleged beau had dropped an unmissable comment. Tiger had taken to her comment section and had encouraged Disha. He had written with a heart-eyed emoji, a clap and fire emoticons:

On the professional front, Disha Patani will be next seen in the film, Ek Villain 2. 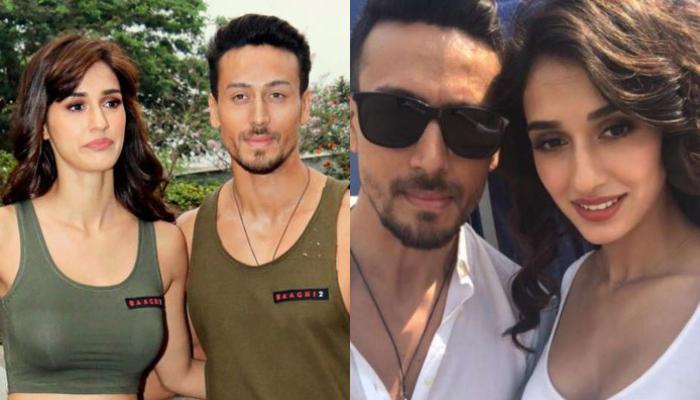 Every day, we come across a lot of videos and pictures of our favourite celebrities, but there's no one quite like Bollywood actress, Disha Patani, as she always set the internet on fire in split seconds with her stunning photos and jaw-dropping videos. The moment she uploads her picture or