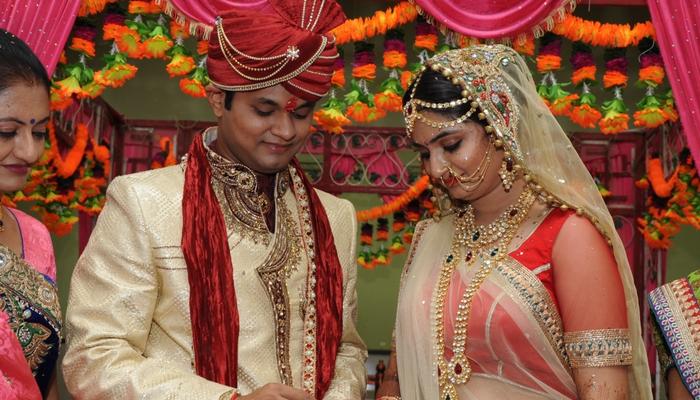 There is nothing that can ever keep two people who are destined to be together, away from each other. No matter how unfavourable the situations might seem, the true lovers find their way out and make sure that their love wins.

Well, if you are thinking that we are telling you the story of a romantic movie, then you are not really wrong. We are saying this because, we are going to tell you a story, which is no less dramatic than a masala Bollywood flick, but the hero and heroine of this story are our real life couple- Kazumi and Smit. So, join us as we take you through the beautiful love story of this gorgeous couple.

The story began in 2010, when Kazumi sent a friend request to Smit on Facebook. Although he accepted it, the two were hardly in touch with each other. It was after two years at a caste function, where the two met for the first time. Kazumi even said, "I knew he was seeing me from corner of his eyes..You know..chori chori chupke chupke!"

Recommended Read: 5 Conversations Every Couple Must Have Before Getting Married

However, this was their first and last meeting till 2013. Almost a year later, his family approached her parents to visit them to discuss about their marriage. During this meeting, they were given some alone time with each other. And, here is what Kazumi remembers of this experience, "I was very nervous, but I still made it very clear that what are my priorities and how I want to live my life. And, just like a gentleman, he listened and agreed to everything." Also Read: Top 6 Qualities To Look For In Your Partner If You Are Going For An Arranged Marriage

While Kazumi felt that the meeting was quite good, she felt strange as there was no reponse from Smit’s family. As the two had exchanged numbers and were in touch with each other, Kazumi asked Smit to tell what went wrong. And, then she came to know that she had been rejected by his family! This of course was a big shock for her, but what was even more shocking was the reason behind it. Telling about it, she said, "He told me that his parents and grandparents didn't like that I came in jeans and shirt to visit them. So, basically I was rejected because I was in jeans!" As it was quite difficult for her to understand how that could be a reason to not like someone, there were no further talks from her family's side as well. So, things went forward in different directions, and Smit got engaged to a girl of his parent’s choice. End of the story! Well, not really, so stay there.

Must Read: 20 Typical Qualities Without Which You Cannot Be A Perfect Indian Bahu

Despite all this drama, they still became very good friends. And, even though he was engaged, Smit would come up with new reasons to meet Kazumi. Seeing how unhappy he was, she too used to meet him just to make him understand that there lies a better future for him.

But, then came a twist in the tale, as he broke off his engagement without telling his parents, and asked her for another chance. Sharing her reaction on this, Kazumi said, “I told him that your family rejected me, so first convince your family, then I will think what I want to do. But, after so many meetings, I found out that I was in love with him. I confessed my feelings on his birthday, on September 2013. And, we started seeing each other, while our families were completely unaware of all this."

Take A Look: 5 Famous Bollywood Stars Who Remarried Without Divorcing Their First Wives

The DDLJ moment of pyaar vs parivaar

As their families eventually came to know about everything, Kazumi and Smit had another big test in front of them- getting the approval of their families. Sharing the experiences both of them had during this time, Kazumi says, “Smit’s parents were very much upset with his decision of calling off the engagement, and told him that they will not get involved in his marriage. Meanwhile at my side, there was chaos in the family that how anyone can reject a girl like Kazumi, and choose someone else.” And, when Kazumi told her parents that she wanted to marry Smit, they simply rejected by saying, "He had broken up with a girl his family had chosen, then why you want to marry such guy? You can get much better man than him. So, stop thinking about him and start looking for someone else.” While Kazumi was clueless about how to change her parent’s perception, they started sending her the profiles of other guys and forced her to marry one of them. But, she stood by her decision and fought back, “I was very firm that I will marry Smit only. So, I told that for me, he is best, and I would never regret this decision, so stop sending such proposals.”

This "truly in love with each other couple" did not accept the defeat from the challenge that the destiny had brought in front of them. So, they started the task of convincing their families. “I had started talking about Smit to my mom how good he is. I even made him talk to my grandparents and uncle, so that they could know that he is actually good person," Kazumi says.

On the other hand, Smit also tried convincing his grandparents that how Kazumi is just perfect for their family. He told them that she is modern and independent, yet so homely. “Finally his parent agreed, and I also started visiting his home and helped his mom in cooking and other work, which impressed her. I was spending more and more time with his grandparents so that they could understand me well,” Kazumi says. Recommended Read: 6 Smart Tricks To Make Her Parents Fall In Love With You

Everything was going fine between Kazumi and Smit, and she was just waiting for him to ask her to marry him officially. On the other hand, Smit planned it really big and shared all the details of his plan with Kazumi's mother to get her approval. And finally, the big day arrived. He took her out for dinner to a boat restaurant in a beautiful lake. Their boat had a very romantic setup as it was decorated with candles and Kazumi's favourite, red balloons. After enjoying a lavish meal, he held her hands and read out the lines of the beautiful song, "These arms" by All-4-one, for her: Don't Miss: 5 Easy Ways To Instantly Adjust In Your New Home After Marriage

Time for a happy ending

Needless to say, Kazumi was elated with this gesture of Smit, and her eyes were filled with tears. As he showed her the ring, Kazumi immediately said yes! The two celebrated by cutting a cake and sealed the deal with a peck. Soon after in November 2013, they had Gol Dhana, a ritual symbolising the engagement ceremony in Gujarati culture. And, they became one forever as they tied the knot on May 10, 2014. Recommended Read: 5 Romantic Ways to Propose Marriage to Your Man

Despite a lot of ups and downs, Kazumi and Smit ensured that their story had a perfect ending. But, to make this happen, they never thought of hurting their parents by taking any step like running away. Instead, they made it possible by being each other’s strength in all the tough times. Truly, these two are an inspiration for a lot of couples. We at Bollywoodshaadis, wish them a blissful married life ahead! A wise man once said, patience is the biggest virtue, which human beings lack! How apt indeed, homo sapiens are known to deploy (sometimes) ridiculous methods to curb the lack of this virtue. On a lighter note, we've brought to you story one such impatient 'human' from the telly world! Yes,