Dalljiet Kaur Reveals Her Wish For Ex-Hubby, Shalin Isn't A Whitewash On Their Past For This Reason

As Dalljiet Kaur wished luck for her ex-husband, Shalin Bhanot, she also had to clarify that it wasn't a "whitewash" on their past and mentioned the reasons behind it!

One of the popular television actresses, Dalljiet Kaur was earlier married to actor, Shalin Bhanot. However, after living in marital bliss for 6 years, they had an ugly split in 2015. Since then, the duo has been co-parenting their son, Jaydon. Currently, Shalin is one of the contestants in the popular controversial reality show, Bigg Boss 16. And as he is a few days away from the finale, his ex-wife extended his wishes for him. However, she had to clarify that her earlier wish for Shalin wasn't a "whitewash" on their past.

Taking to her IG handle a few hours ago on January 24, 2023, Dalljiet Kaur wished her ex-husband, Shalin Bhanot for days ahead of him in the reality show, Bigg Boss 16. She shared a joyful picture of her and their son, Jaydon riding on a boat and asked Shalin to remain calm and patient inside the house. In the picture, Dalljiet looked gorgeous in a short chikankari dress and was seen smiling the brightest while joining her fingers with her son. Shalin's social media team too, reshared his ex-wife, Dalljiet's wish and thanked her for the same. Dalljiet's caption can be read as:

Hina Khan Visits Late Father's Grave On Her 'First Birthday Without' Him, Pens A Heartfelt Note

“Last few weeks left for Bigg Boss to get over. I wish you all the best @shalinbhanot. Be patient, be calm and stay strong!”

Soon, Dalljiet and Shalin's millions of fans started pointing out that her recent wish for him was a "whitewash" on their past. However, Dalljiet once again took to her IG stories and posted a picture message mentioning the same. She mentioned that their past would remain intact till the last day of her life and penned:

"It is a simple wish for someone I have known. I know Bigg boss house can be extremely challenging. My "all the best" wish is not a whitewash on the past. It has been a crazy journey for me and my son but after years, I find myself sending a wish to him and I have no regret about it. Past will remain till the very end of my life and it will hurt every single time I'll look back. But, I choose to look ahead in life. That's why I chose to extend a wish for Shalin."

When Dalljiet Kaur extended her support to ex-hubby, Shalin after he broke down on the show

Earlier, on December 16, 2022, Dalljiet Kaur had taken to her Instagram stories and reshared a video of her ex-husband, Shalin Bhanot, from the Bigg Boss house. In the video, Shalin was seen breaking down after reading a letter from his family. Sharing the video, Dalljiet wished him a nice journey ahead and also advised him to play with his heart and be fair. Atop it, she had written:

"Shalin, I have not seen Bigg Boss for a long time but came across this. I wish you well for this journey ahead. Play fair. Play with your heart. - Dalljiet." 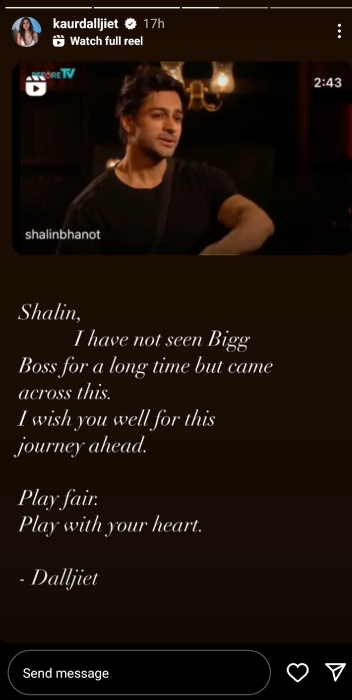 After their separation, in a conversation with Hindustan Times in 2016, Shalin was asked about his wife, Dalljiet. To this, the actor said that despite their ugly split, he wouldn't talk bad about the mother of his child. He had said:

“After the divorce happened, I was really scared and didn’t step out of the house for first 17 days. And the first time I went out, I had gone to the gym because I wanted to work out and feel fresh and I had all eyes on me, as people form perceptions.” 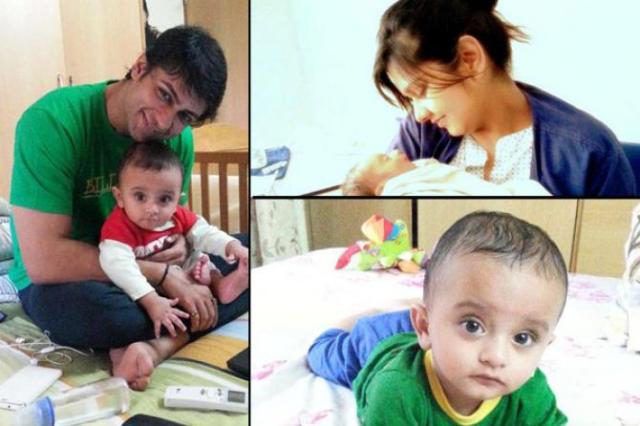 What do you think about Dalljiet's wish for Shalin? Let us know!

Next Read: Shah Rukh Khan Gives A Sassy Reply Who Tries To Troll His Female Avatar, Says 'I'm Attractive In...'