Chiranjeevi Sarja shared his disbelief to accept his cousin brother's sudden death by sharing the late actor's last post from the day of his demise. Scroll down to read more!

Kannada actor, Chiranjeevi Sarja was one successful and most loved actor across the nation for his grounded nature. He had acted in 22 films since 2009, winning many awards, and he was born to be an actor. The actor had many films in his hands and was soon going to be a father, however, our plans don’t stand still when life has other plans for us. (Also Read: Divyanka Tripathi Dahiya Flirts With Her Husband, Vivek Dahiya, Asks Him To Take Her For A Ride)

On June 7, 2020, Chiranjeevi Sarja had taken his last breath at the mere age of 39. He had suffered a massive heart stroke. His death had left the Kannada industry in utter shock, but what had left the entire fraternity in tears was the news that his wife, Meghana Sarja is three months pregnant and the couple was soon going to announce the news of their pregnancy. His friends and family are saddened and shocked and his cousin brother, Suraj has presented his feelings for his brother on his social media handle. On June 10, 2020, Suraj Sarja, who is a music director took to his Instagram handle to share a screenshot of his brother, Chiranjeevi’s last social media post. The late actor had shared a then-and-now post with his brother, Dhruv Sarja and cousin, Suraj Sarja on the day of his demise. The post was a collage of their picture from their childhood days to present, posing in the same manner. Suraj shared the screengrab of the same and how he is in disbelief that his brother has left them this soon. He wrote, "Still Can't digest the fact that he is left us and this being last post. Will miss you a lot brother. Just no words to explain." 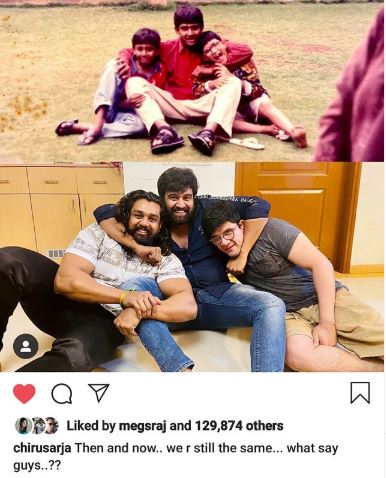 The popular Kannada actor, Chiranjeevi Sarja’s demise came with the most heartbreaking news that the couple was expecting their first child. According to media reports, his wife, Meghana Raj is three months pregnant right now, and both Meghana and Chiranjeevi were planning to announce the news of their journey towards parenthood soon through their respective social media handles. The late actor’s demise and the news of their pregnancy made people extend their condolences and blessing for the pregnant wife. Amidst all, a video of Meghana breaking down in tears in front of her husband had been doing the rounds on the internet and is one painful video to watch! Take a look. (Don't Miss: Preity Zinta Gives A 'Goodenough Haircut To Mr Goodenough', Check Out Their Cute Video)

The news of Chiranjeevi’s untimely demise had left many mega-celebrities in shock and they all had come forward to extend their support and condolences to the family. From Prithviraj Sukumaran’s “Absolutely devastated to hear about the sudden demise of Chiranjeevi Sarja. I pray Meghna and the whole family finds the strength to tide through this shock and sorrow,” to Kriti Kharbanda’s “My first co-star, an amazing human being, the boy with the sweetest smile and the nicest heart. I still can’t believe you’ve left us, Chiru. My heart aches and cries as I think about you. Rest in peace Chiru,” many celebrities had come forward and had mourned for the loss. Take a look.

Late actor, Chiranjeevi had gotten engaged with the love of his life, Meghana Raj in 2017 and had a Christian wedding on April 30, 2018, followed by a traditional Hindu wedding ceremony on May 2, 2018. Since then, their respective Instagram handles are filled with their cute PDA moments and pictures, giving couple goals to the millennials. (Recommended Read: Hina Khan Opens Up On Finding Love In Rocky Jaiswal, Reveals Who Proposed First) 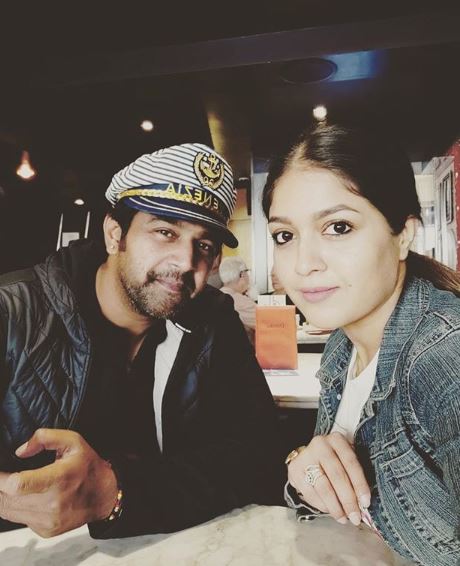