Chhavi Mittal Shifts To Her New House, Completes All Pending Deadlines On Her 41st Week Of Pregnancy

Chhavi Mittal Shifts To Her New House, Completes All Pending Deadlines On Her 41st Week Of Pregnancy

Chhavi Mittal has entered the 41st week of her pregnancy and continues her journey of encouraging all the newbie and soon-to-be mommies. 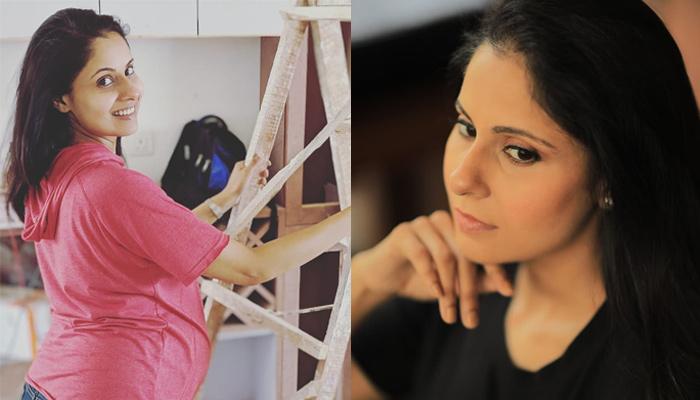 What are the thoughts that come to you when we talk of 'pregnancy' and 'labour'? While the first word may make you go all ‘awww’ and ‘happy’, the second word may make shivers run down your spine! Pain, blood, pressure and a weird combination of fear and nervousness creep in our minds whenever we think about pregnancy labour. But this lady, we tell you, has changed all pregnancy myths governing us! Yes, Chhavi Mittal has defined, challenged and won overall pregnancy stereotypes. From working until the wee hours of her pregnancy, all chirpy and happy meeting deadlines, adhering time to her family and herself, Chhavi Mittal is almost becoming synonymous to #PregnancyGoals! (Do Read: Is Deepika Padukone Pregnant? Fans Speculate After She Flaunts A Slight Bump At MET Gala After-Party)

And Chhavi Mittal’s latest Instagram picture is a proof! The soon-to-be mommy has entered the 41st week of her pregnancy and continues her journey of encouraging all the newbie and soon-to-be mommies out there. Sharing a picture from what looks some major house shifting happening, Chhavi wrote, “No, no signs of the hospital yet.. still standing on my own 2 feet.. still working more than ever to achieve my deadlines! I wanted to move into my new house before the LO arrives and really happy that I was successfully able to achieve that goal thanks to my superman husband @mohithussein who has run from pillar to post in achieving this.” 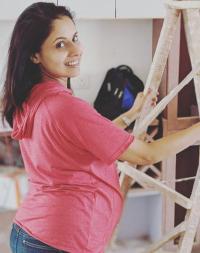 Chhavi Mittal’s post could be further read as “Apart from this there's also the schedules for SIT's YouTube and Facebook and Instagram that have to be finalised. And with us not being able to go to office due to the whole shifting and last minute finishing going on in the house and the preparations for the baby to arrive, (& me walking at a snail's pace), it's really difficult to co-ordinate at office. Add to that terrible network, and you have both your hands and your feet full! But, thankfully, I was able to achieve all these deadlines last night by 2am. Phew.... So, for all of you who feel I've gone to the hospital and hence no posts, sorry to disappoint you! But I promise to drop in a quick word when labour knocks at my door! Meanwhile, keep those prayers coming in!” Chhavi’s post was backed by a couple of relevant hashtags which read “#41weekspregnant #interiors #interiordesign #home #homesweethome #homedecor #chhavimittal #pregnant #pregnancy”. Actress and soon-to-be mommy, Navina Bole too, was deeply inspired by Chhavi’s thoughts as she commented, “So so strong and inspirational!! Kudos momma” on her post. Checkout a snapshot of the same below:

Just a few days back, Chhavi Mittal was bestowed with the most pleasant surprise on this planet when her 6-year-old daughter, Areeza Hussein had planned her mommy’s baby shower ceremony with the help of her friends. Revealing her ecstasy upon the same, Chhavi had written, “This whole pregnancy has been so damn hectic for me that I have literally had no time to even think of feeling special. But there's one thing I did miss this time. And that is a BABY SHOWER. Normally it's either a sister or a best friend who throws you a baby shower, but I don't have a sister, and my best friend tried to get together with my darling husband @mohithussein to plan one for me, but unfortunately I couldn't take out a day since I had deadlines to achieve before going into labour. But you know how Sharukh Khan said that "poori kaynaat" dialogue? So I think the forces of nature got together and sent an angel from above to throw me a baby shower literally days before my labour would begin!" (Must Read: Priyanka Chopra's Sweet Message For Meghan Markle-Prince Harry On Welcoming Baby, Checkout) 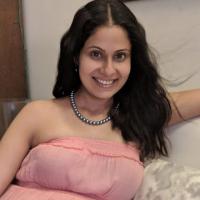 Chhavi Mittal‘s post could be further read as, “Day before yesterday I got a call from my 6-year-old daughter telling me that tomorrow's my baby shower and that I'm to leave the house at 4 and then come back at 6! My Little fairy had called 2-3 of her other 6-year-old friends, who came and helped her decorate the whole house with coloured tapes, balloons, messages on post-its, flowers and seashells. I was made to wait outside the door for a few minutes because they were not ready... Then I told them that I need to sit, so a cute blindfold (the eye patch I wear to sleep) was put around my eyes & my cutie held my hand and made me sit while they did the last minute finishing touches.. then 5 minutes later they all came and Areeza removed my blindfold while they shouted "surprise" and filled up my lap with little cards full of love and spelling mistakes! It was the biggest awww moment of my life ever!!” 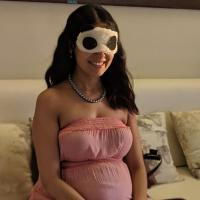 Truly, Chhavi Mittal’s happiness must have known no bounds as her post concluded with, “And I couldn't have wished for a better baby shower! The people who matter to me the most, and to whom I matter the most were present, and the little human that I made 6 years ago created this special, unforgettable moment for me. And later she told me, "mama I'll always do this for you, on every special occasion". Was this the best day in my pregnancy... Strike that... best day in my whole life or what! The fact that I spent the next 2 hours after that cleaning the house and doing pocha is a completely different story though #babyshower. P.S. She asked everyone to wear pink.” (Also Read: Taimur Ali Khan's Favourite Game Is Saying 'Khichik Khichik' Pretending To Be 'Mediawale') 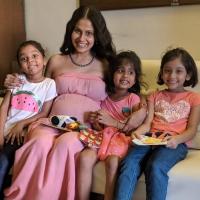 Having said that, we can’t wait to see a picture of the awesome-foursome Hussein family soon! Here’s wishing Chhavi, an easy-breezy delivery!