Television actress, Charu Asopa and her husband, Rajeev Sen are enjoying their first Lohri together after the wedding. Check out the pictures of their celebrations below! 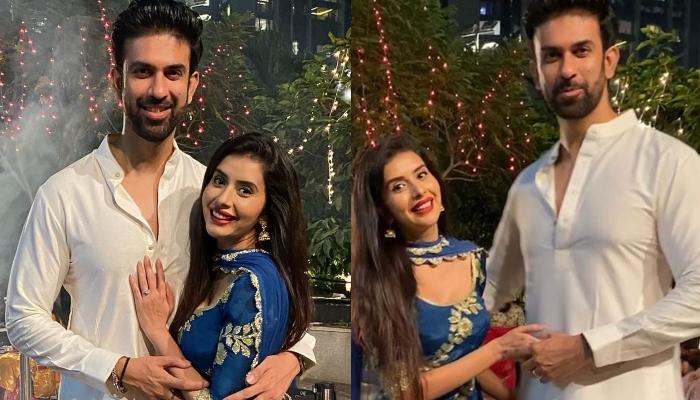 Lohri is more than just a festival about til, gur rewari, peanuts and popcorn going into the holy bonfire. It is an auspicious night that brings along a lot of fortune, luck and happiness in the family. But it holds a special importance for the new family member (be it a bride or a baby) as their first Lohri is celebrated like a big festival and everyone is invited to bless them. And television actress, Charu Asopa's first Lohri in the 'Sen' family was no different. (Recommend Read: Janhvi Kapoor Shares A Picture Of Father, Boney Kapoor With Chachu, Anil Kapoor From 'Hum Paanch')

On June 16, 2019, Rajeev and Charu had tied the knot in Goa and their wedding celebration was full of fun elements that depicted their love story beautifully. Since then, their Instagram feeds are filled mushy pictures and adorable love notes. The duo knows how to make each other feel special and we cannot stop but gush over their in-love pictures.

On January 13, 2020, Charu took to her Instagram handle and posted a series of pictures from her first Lohri celebration with husband, Rajeev Sen. In the pictures, we can see Charu donning a gorgeous blue patiala suit with golden embroidery all over the kurta. On the other hand, Rajeev opted for a white kurta-pyjama. The actress captioned the picture as "Our first lohri together." Take a look at it below:

On January 11, 2020, Rajeev and Charu completed first year love anniversary. They had met each other as strangers on this day and a year after they are lawfully wedded. The actress penned a heartfelt note and wrote, "Happy 1 year babie... I still remember when I saw u on 11th Jan 2019 for the first time, a tall and handsome gentleman coming out of the lift of Oberoi mall. Kal ki baat lagti hai... when we met we were strangers but today we are Mr and mrs sen. It was all destined. " (Also Read: Taimur Ali Khan Will Make His Debut With Parents, Saif Ali Khan And Kareena Kapoor, Details Inside)

On Rajeev's first birthday post-marriage, Charu had written a beautiful note, describing all her feelings and it could be read as "So it’s my husband’s first birthday with me. It’s extremely special to me. Babie you always make me feel so special so today I really wanna tell you how special you are for me. But you know what I can’t explain it in words, that’s not possible. But I will just tell you that my world starts with you and ends with you. You complete me. Why didn't you meet me before? Khair ant bhala toh sab bhala. So happy birthday to the world’s most romantic and thoughtful husband alive. Love you, world's most amazing husband. Yes, girls keep feeling jealous because I've got the best one. Happy birthday my love."

In an interview with The Times of India, Charu had opened up on her relationship and how she fell in love with Rajeev. She had shared how life played its game, "After our first meeting, we had decided to catch up again over coffee, but I left for my hometown, Bikaner. I was on a much-needed break after my show, Jiji Maa, ended. In fact, I hadn’t decided when to return. However, as luck would have it, I was offered KarnSangini and had to report on the set the very next day."

She had further added, "I texted Rajeev from the set and told him that we could meet for coffee. I had assumed that the meeting would end in half an hour. However, we went on talking for hours until I told him that I had to leave as I had an early call time the next day. We started chatting, spending time together and the rest, as they say, is history. I don’t know if I can call it, love at first sight, but it looks like that." (Don't Miss: Mukesh Ambani And Clan Officially Welcome Radhika Merchant In Their Family On Reliance Annual Day)

Well, we wish Charu and Rajeev, the happiest Lohri!

Trolls are an inevitable part of a celebrity's life! The moment they decide to be a public personality, they face trolling for their looks and their every little habit. The trolling army on social media never misses a chance to target celebrities and they have a comment on everything they do.