The bride had opted for different designers for her different pre-wedding and wedding ceremonies, and she had looked stunning. So, without any further ado, let's decode her lookbooks!

A shaadi brings a splash of colour, fun and happiness in everyone's life related to that wedding. Months before the D-day, the bride and the groom start planning their wedding to make it one of the grandest events. A bride starts bookmarking her dream outfits, jewellery and makeup artists because it is she who holds the centre of attention.

A bride wants to look her best at each and every pre-wedding and wedding ceremony. Thus, she opts for the ace designer wears. And we stumbled upon a bride who had opted for different fashion designers for her different events, and each day she had put her best fashion foot forward, flaunting her gala look!

Bride in Manish Malhotra outfit for her waalima 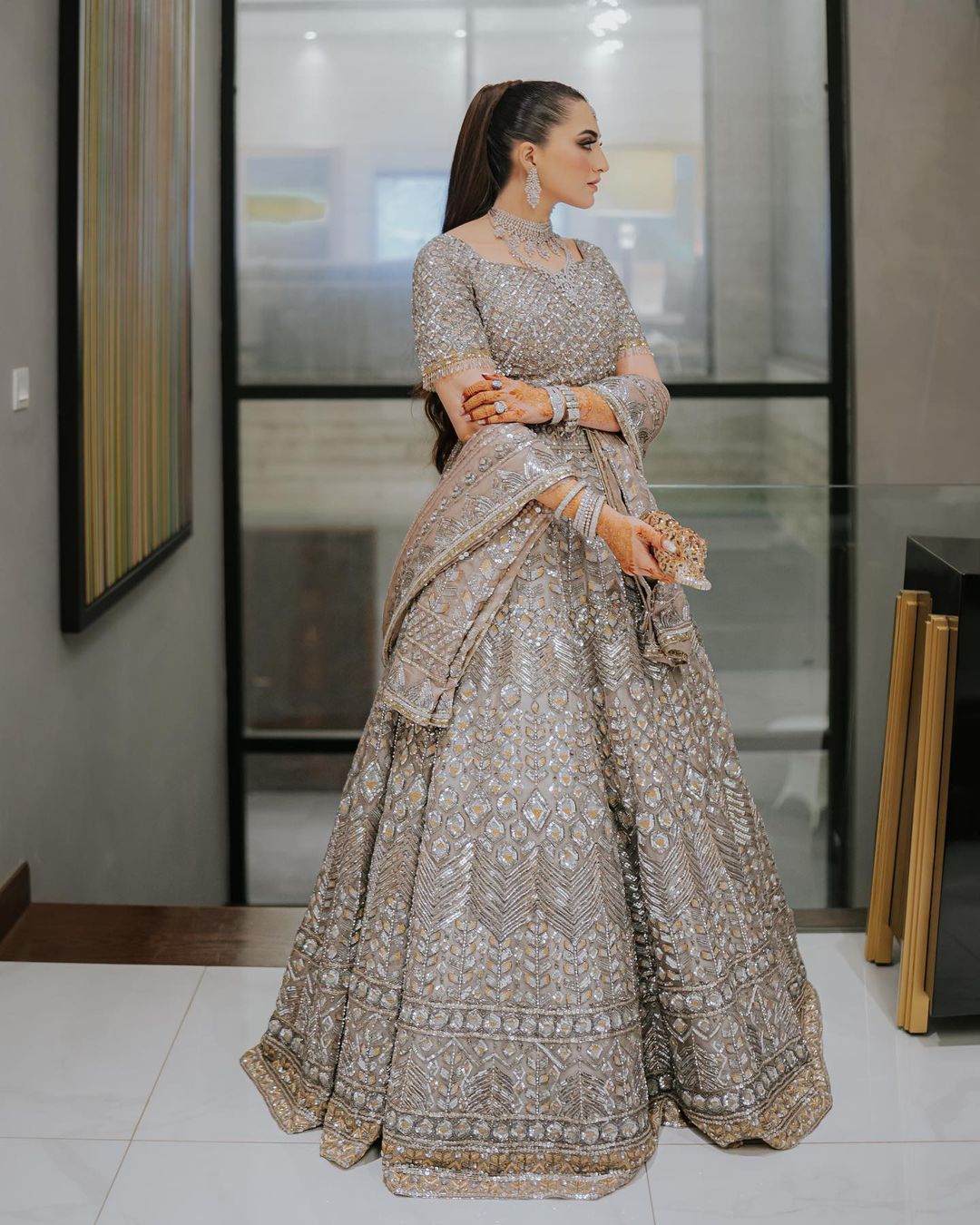 The bride, Neha Khan had looked stunningly beautiful at all of her wedding events as she had tied the knot with the love of her life, Mudassir. She had chosen Manish Malhotra to perfect her waalima outfit. She had dazzled in a beige coloured lehenga choli which was embellished with chunks of crystals, silver thread, zari work and sequins. The sleeves of the choli had fringe detailing. She had paired it with a matching dupatta. To accentuate her look, she had worn a diamond choker, a necklace, earrings and a sleek maang teeka. She had opted for diamond kadha and bangles to complement her look. 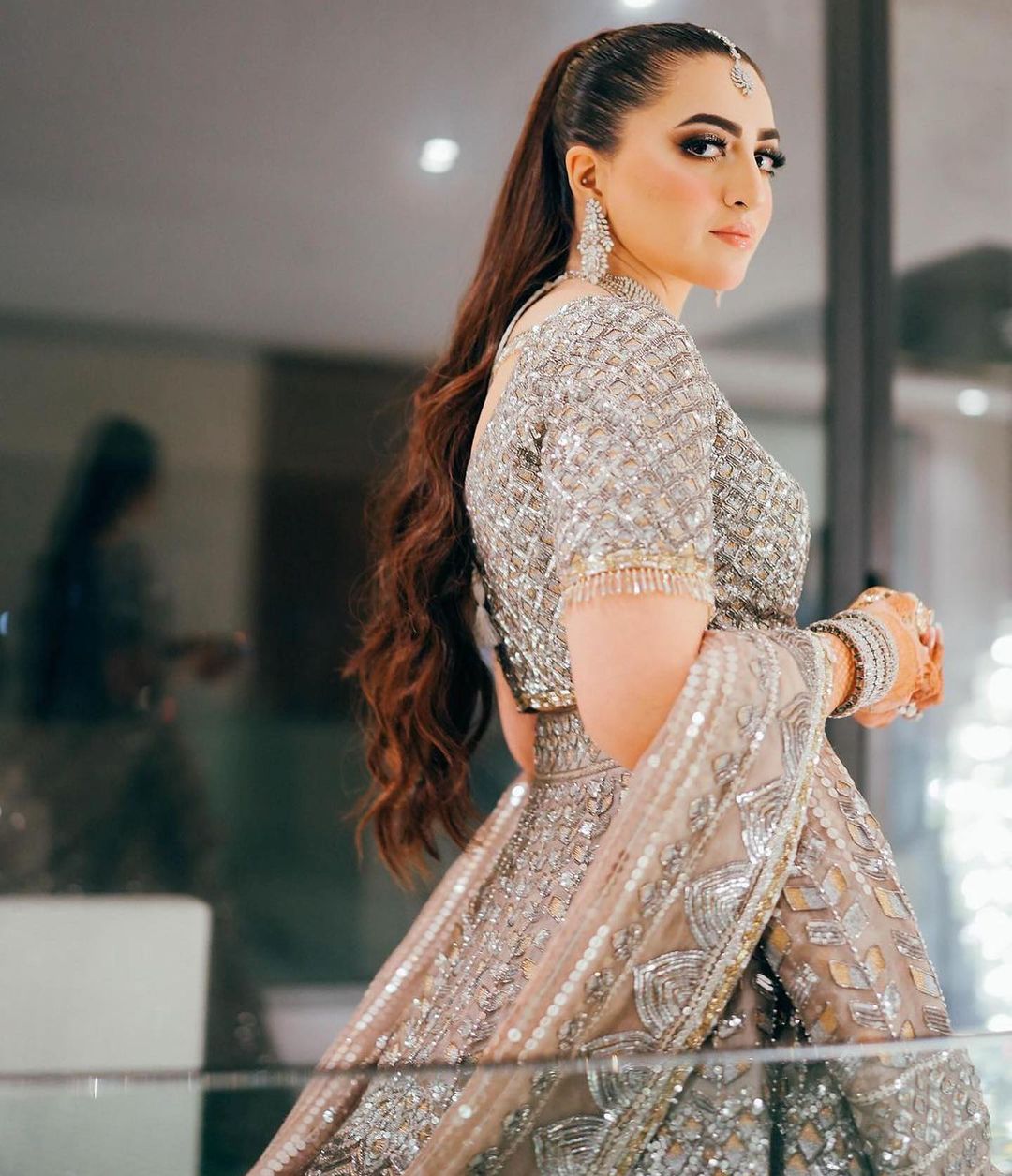 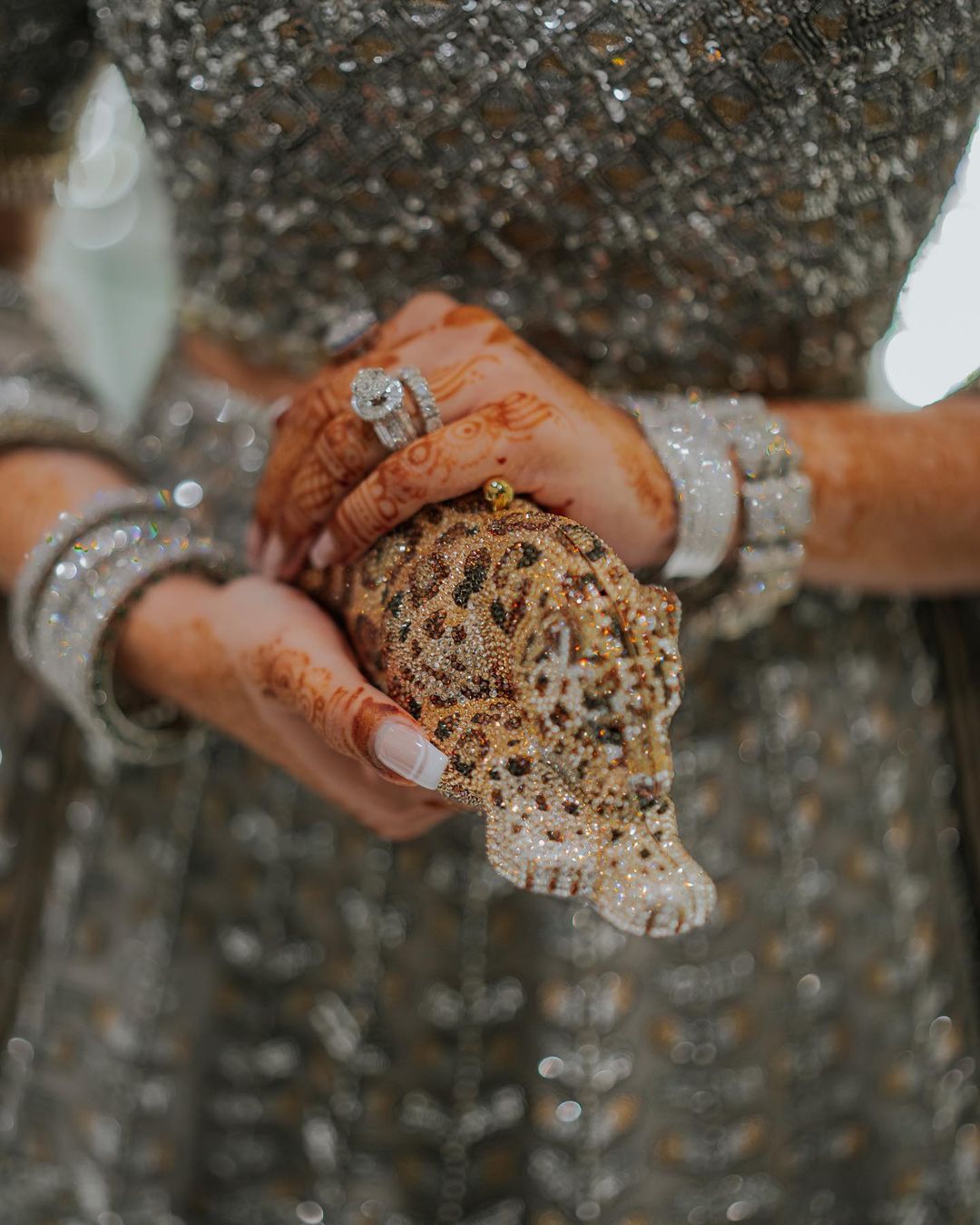 For makeup, she had chosen high defined brows, smokey eyes with thick lashes, contoured and highlighted cheeks and nude lip shade. The bride had pulled her hair in a high ponytail with soft curls. But what had caught our attention was her sequinned tiger figured mini clutch. 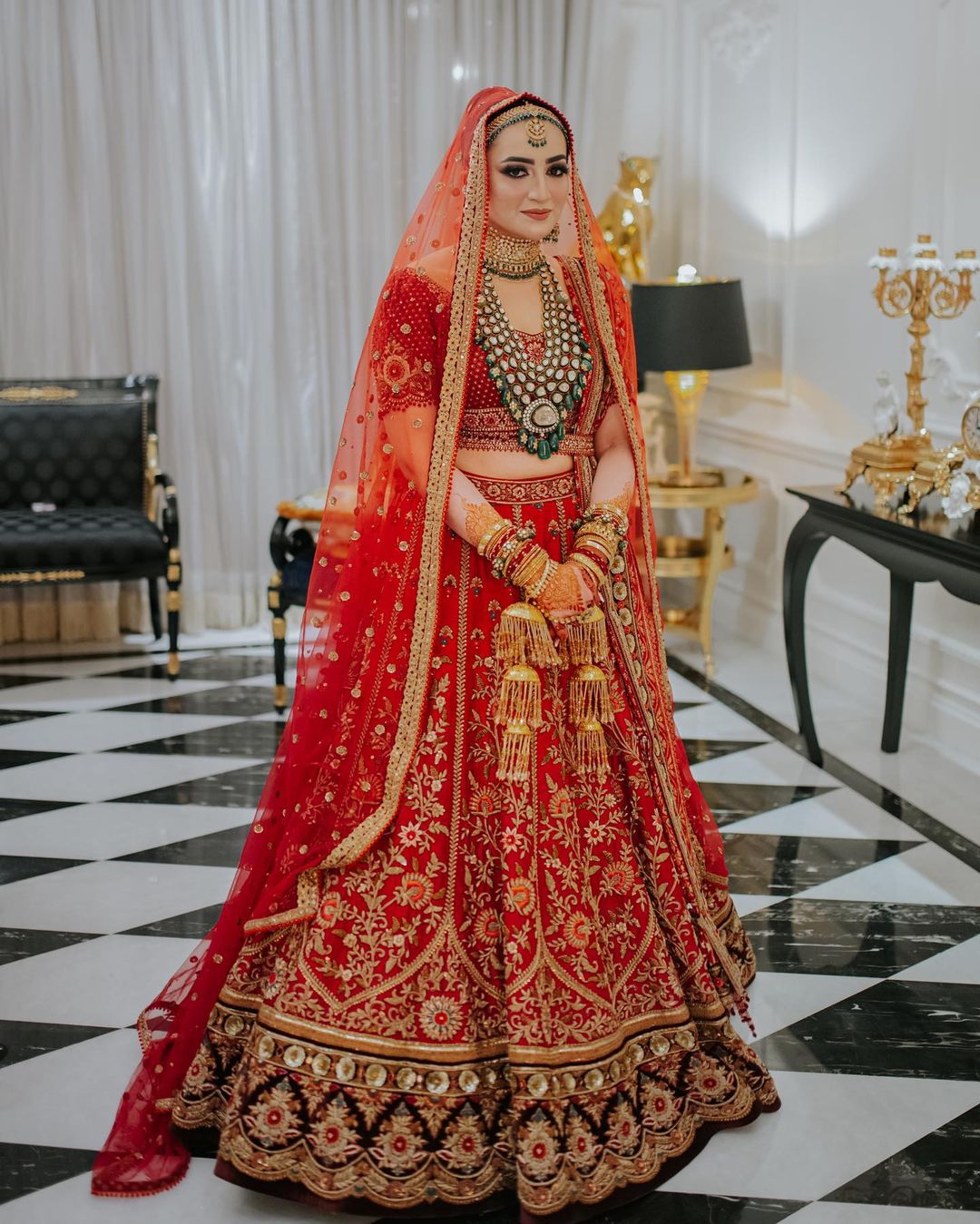 Neha had selected a red shaadi ka joda for her baarat. She had donned a red and golden embroidered lehenga choli with a broad scalloped hemline with an embellished detailing, and she had paired it with a dupatta. The dupatta had a golden embroidery at the border. She had completed her look with polki jewellery, including a choker, rani haar, earring and a matha patti. She also had worn haath phool, red chooda with customised pearl drop kaleeras. 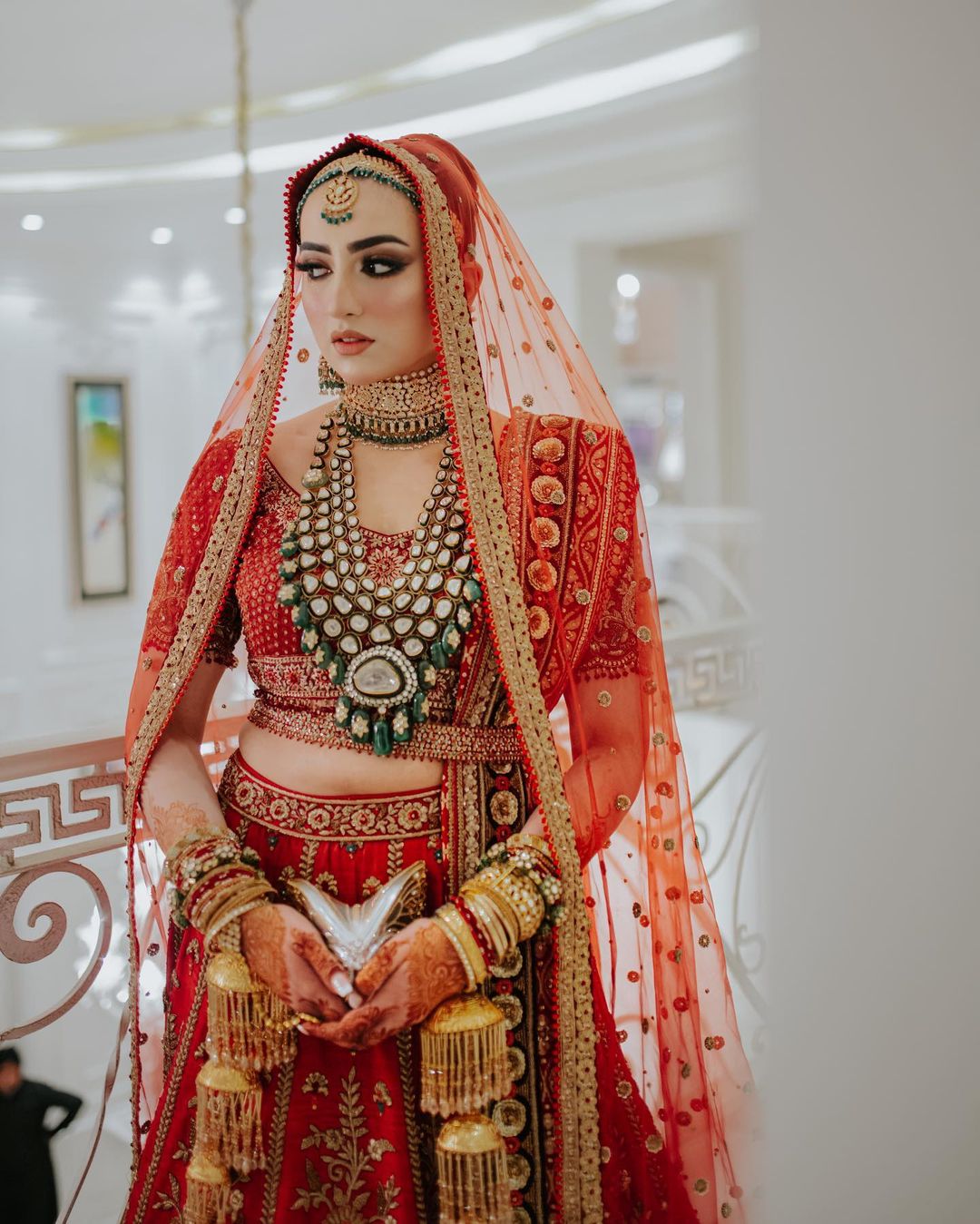 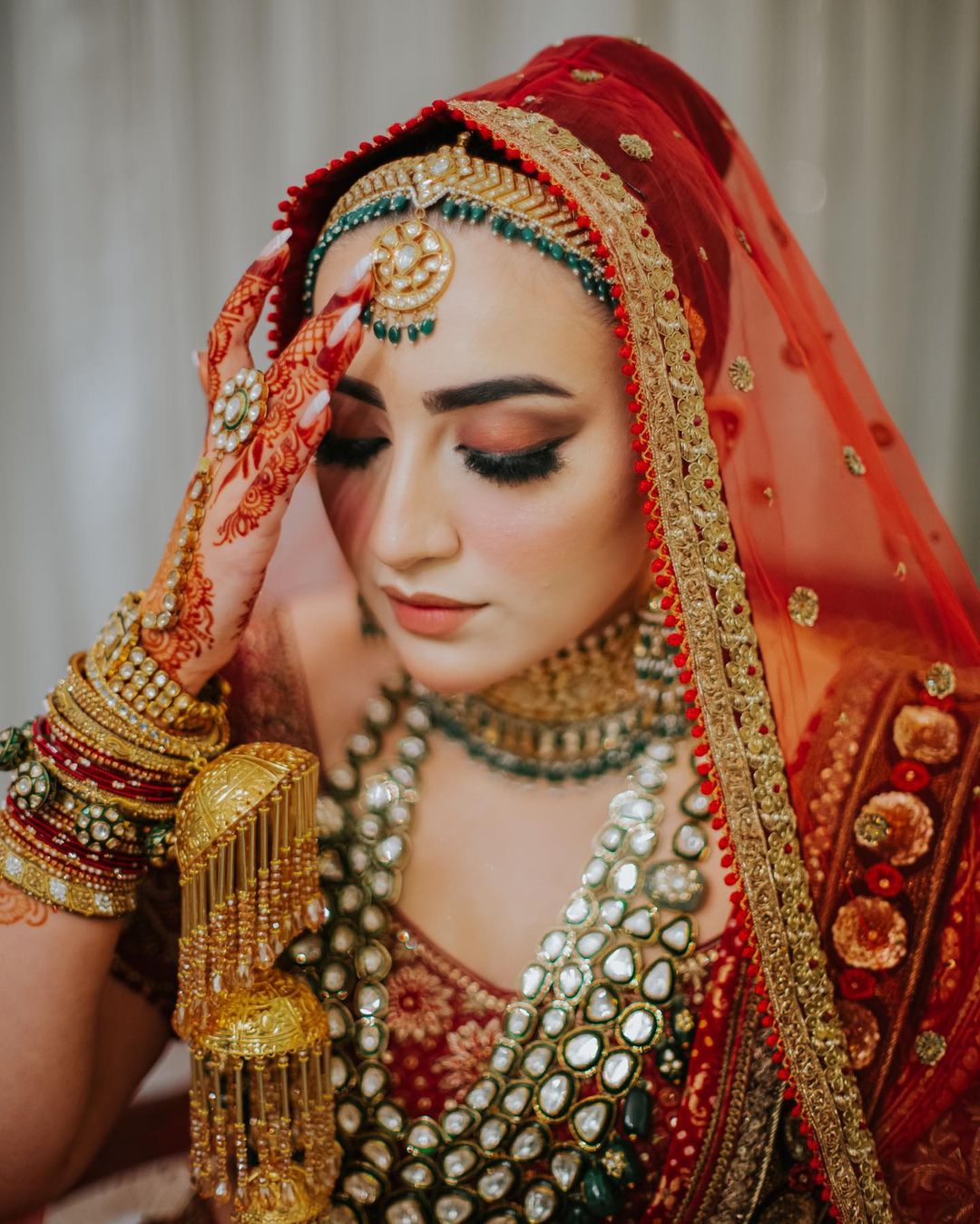 She had completed her look with high defined brows, soft red smokey eyes with thick lashes, blush-toned cheeks and brownish nude lipstick. She had pulled up her hair in a middle-parted bun. 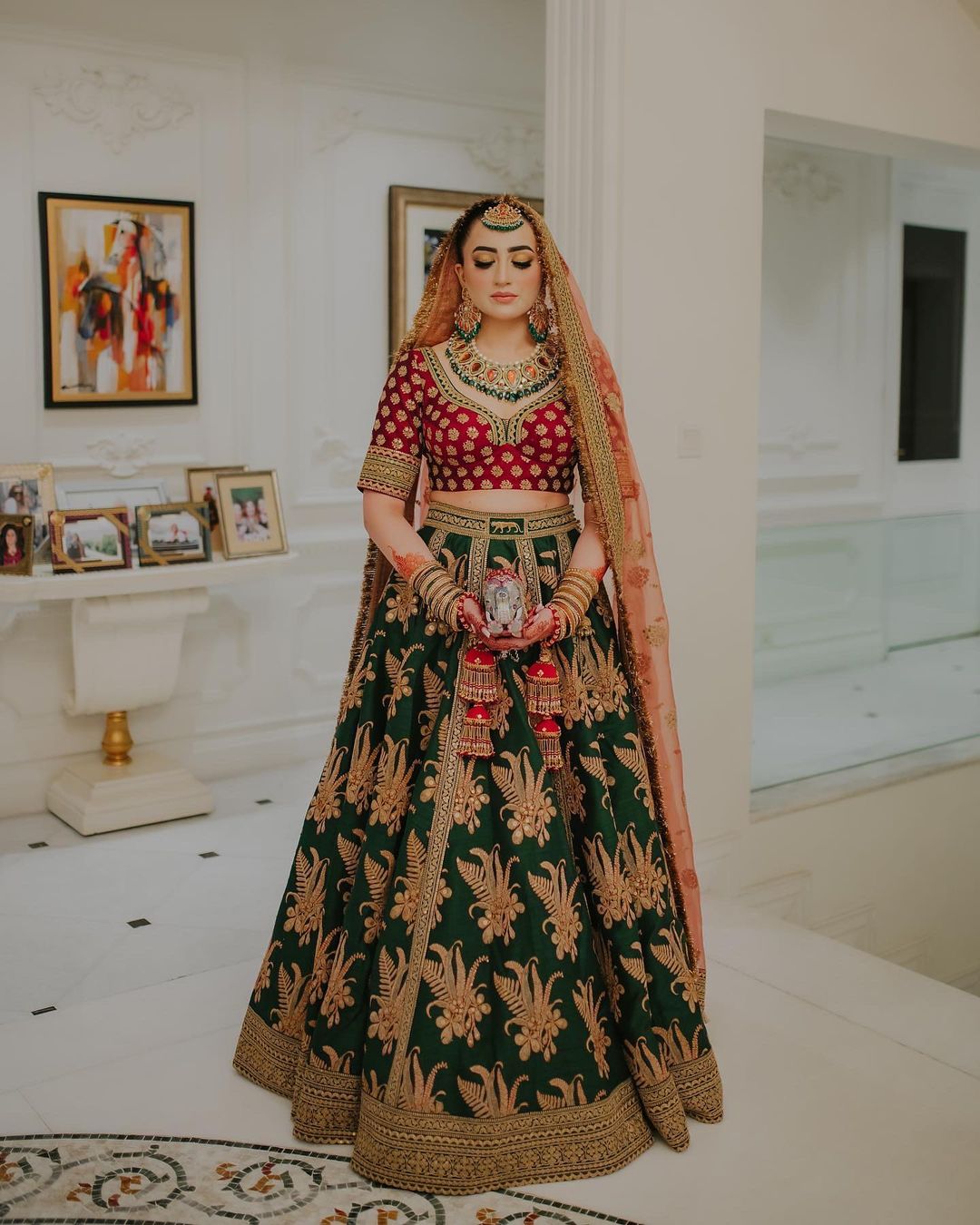 Neha had opted for the ace bridal fashion designer, Sabyasachi Mukherjee for her sangeet ensemble. She had looked gorgeous in a dark green-coloured lehenga that had a golden thread embroidery work in leaf patterns all over it. She had paired it with a maroon-coloured choli with an intricate floral design and a broad design embroidered hemline. She had accentuated her look with a red-coloured sheer dupatta with a kiran detailing border and golden thread embroidery. 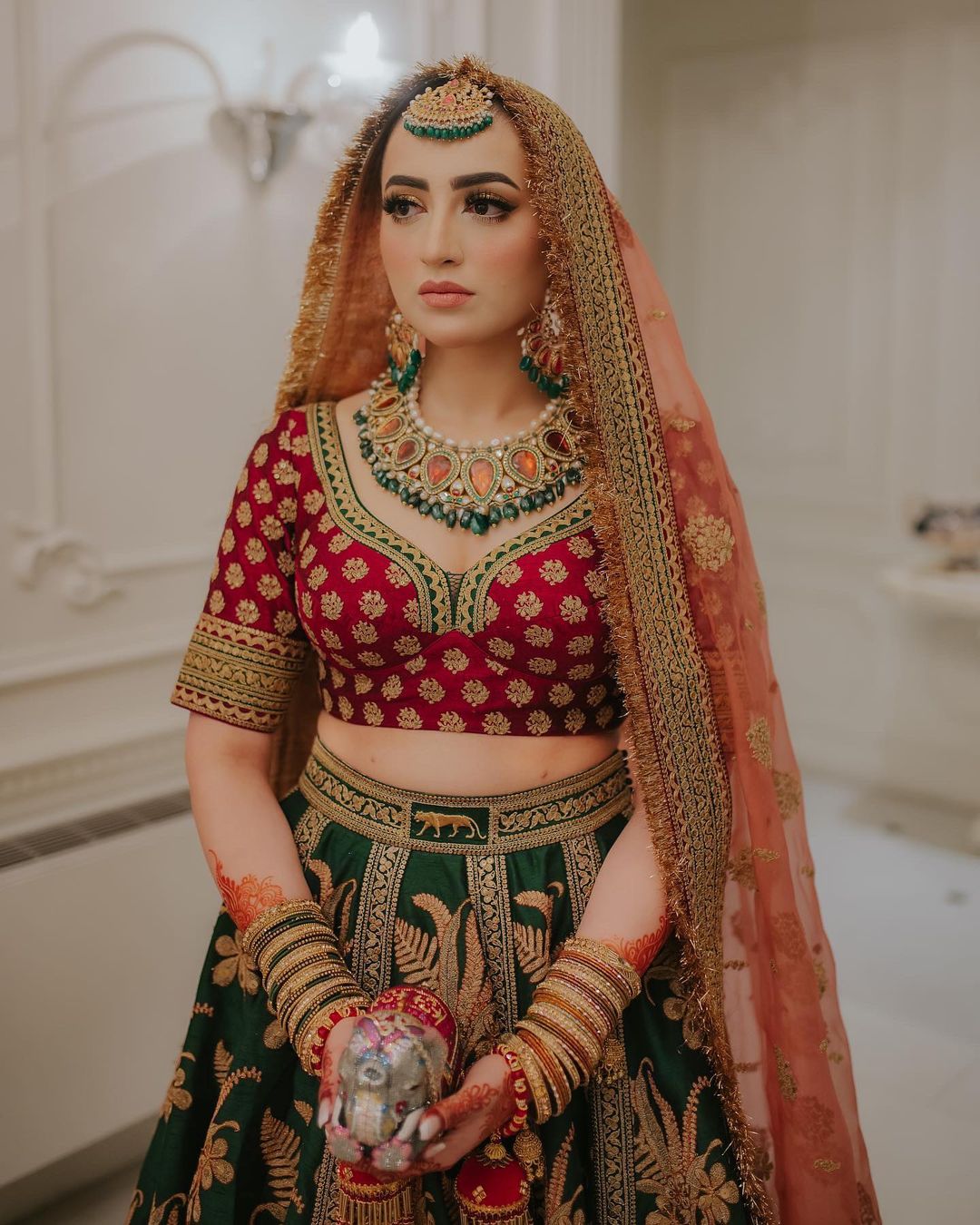 She had worn an emerald and orange stone-studded jadau haar, big danglers, and a broad maang teeka. She had completed her look with customised latkan style kaleera and bangles. But what had caught our attention was her elephant figured mini clutch. 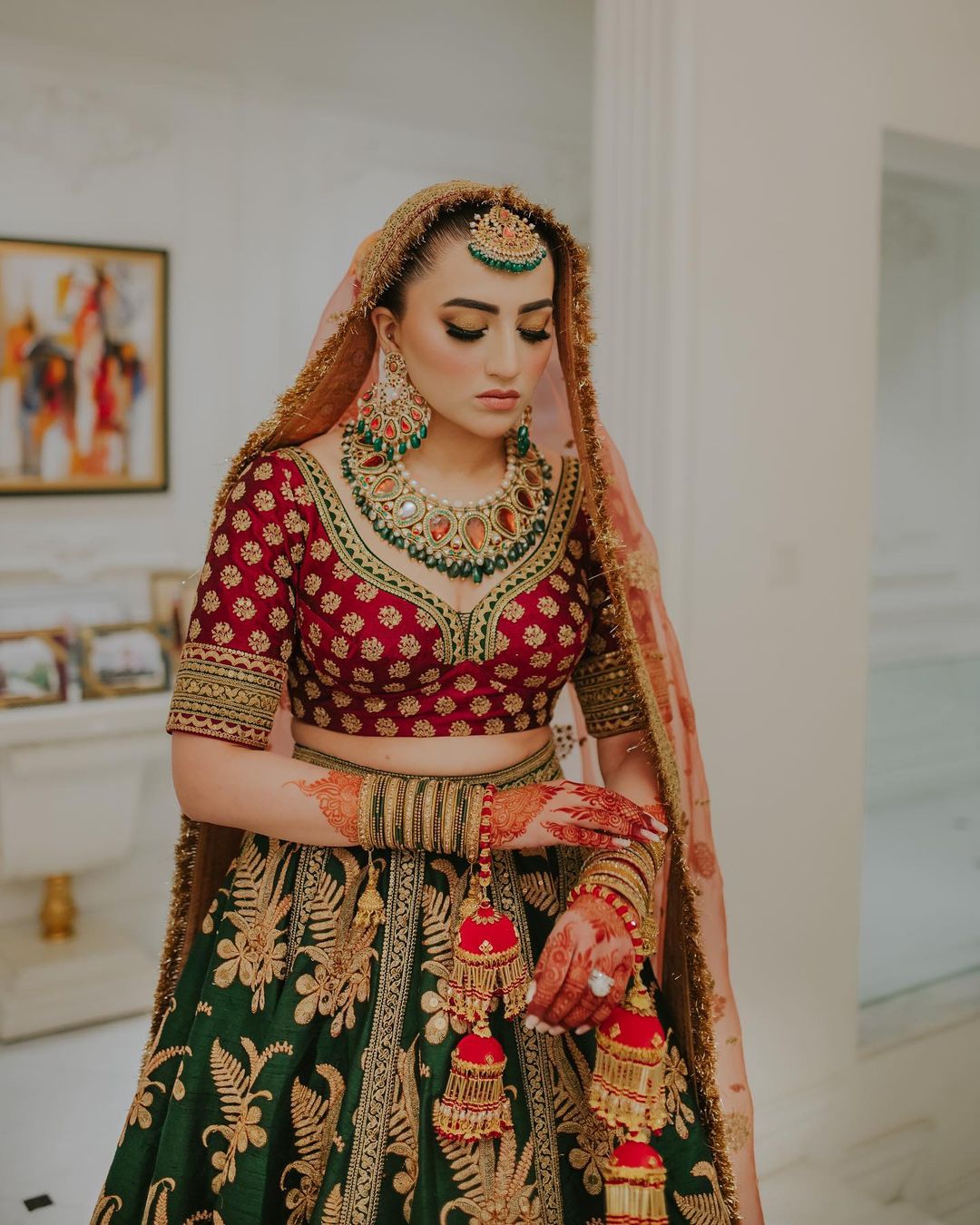 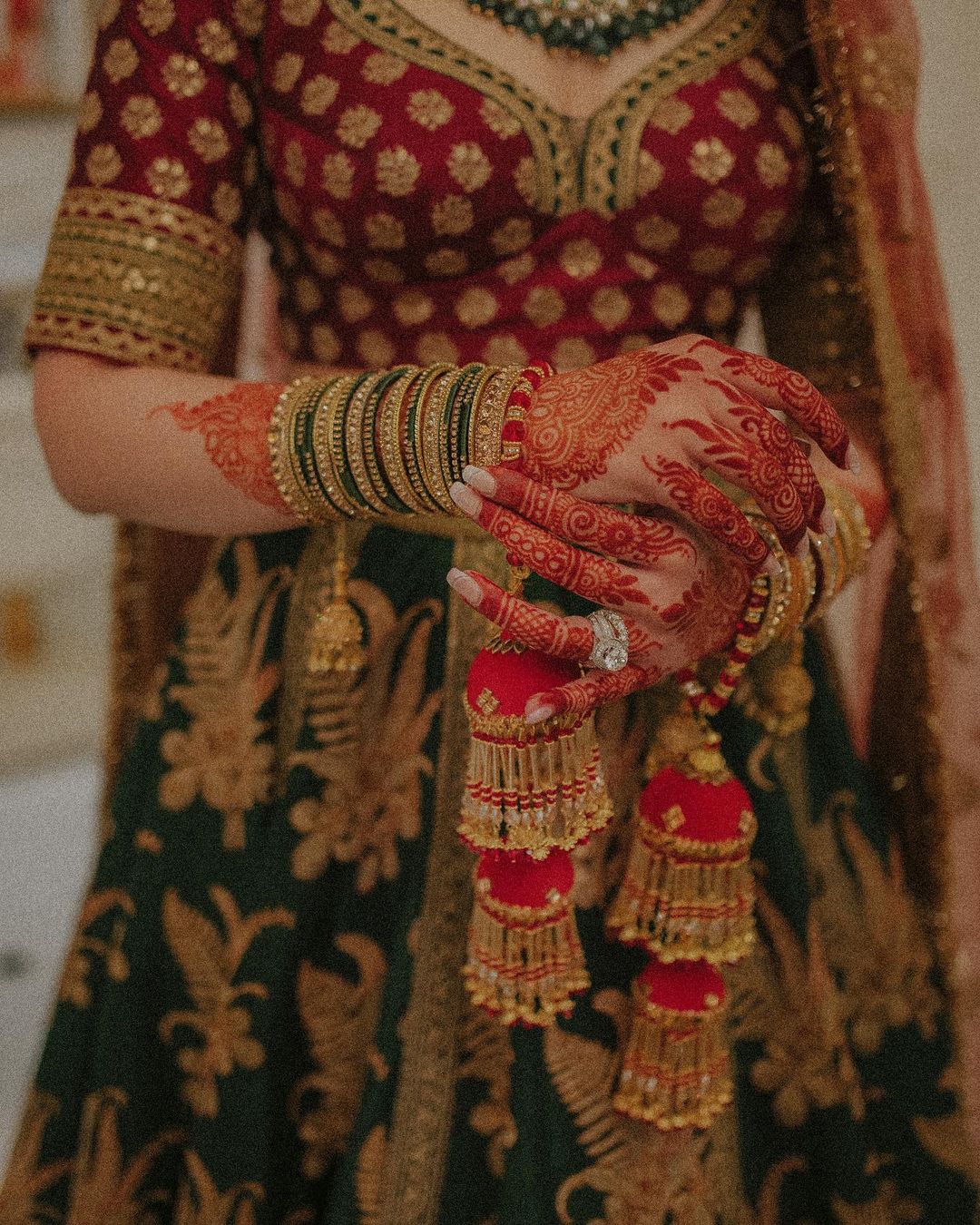 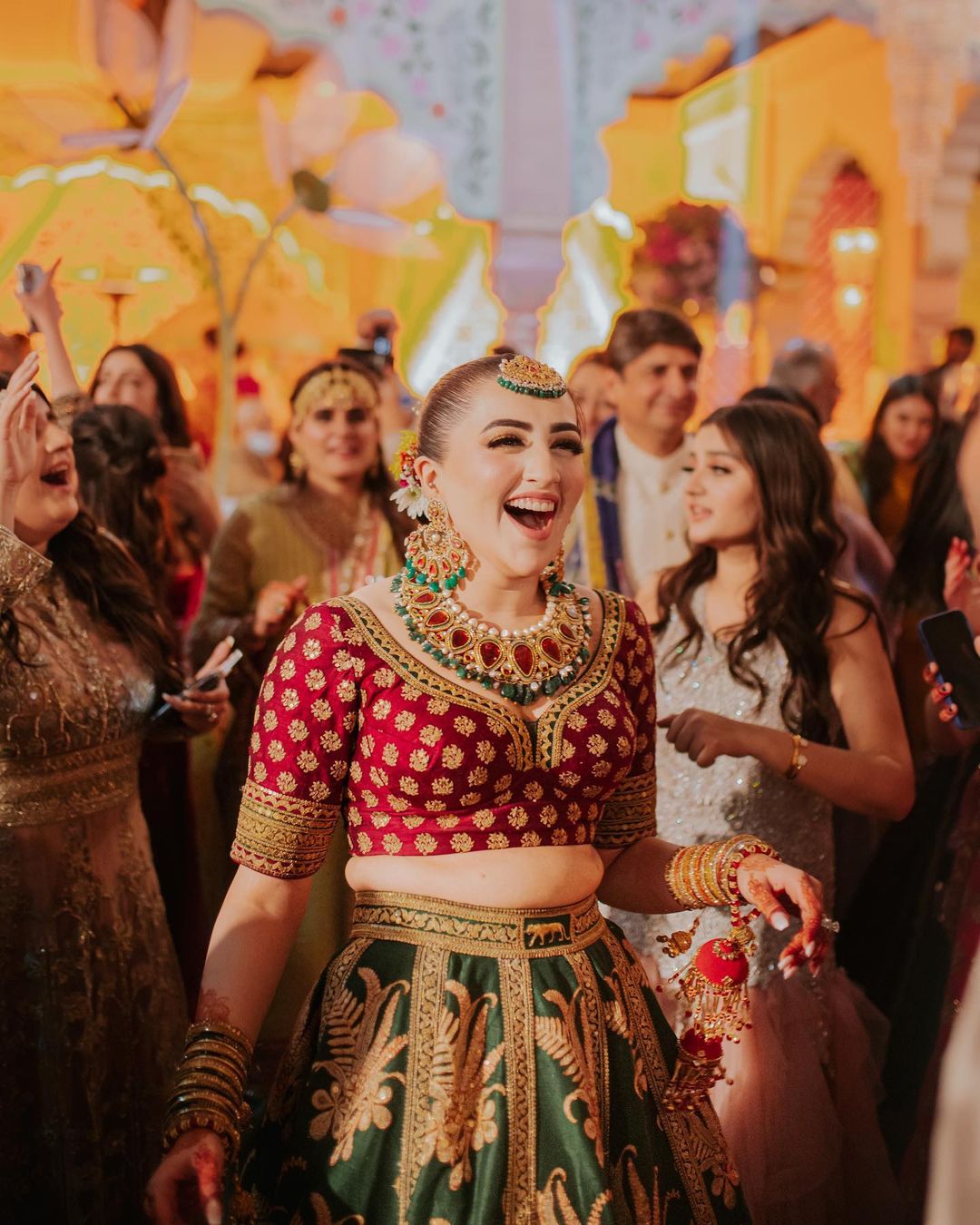 For the makeup, the bride had chosen a clean, dewy but regal look. It had featured high defined brows, golden shimmery eye-shadow with soft winged liner, thick lashes, nude shadowed waterline, toned cheeks and nude glossy lips. She had pulled her hair in a tight bun which she had adorned with flowers. Neha had raised the bridal fashion bar much higher by donning a yellow ensemble at mehendi. She had worn a bright sunshine yellow-coloured lehenga choli which was embroidered with golden thread all over it in floral patterns. She had completed her mehendi look with a pair of huge chandbalis and by keeping her makeup undertone. She had accentuated her look with defined brows, yellow eye-shadow, a sleek winged eyeliner, curled up lashes and nude lip shade. But what had looked trendy in her whole mehendi lookbook was her hairdo. She had clipped strands of hair from the crown area and had adorned it with bejewelled parandis. 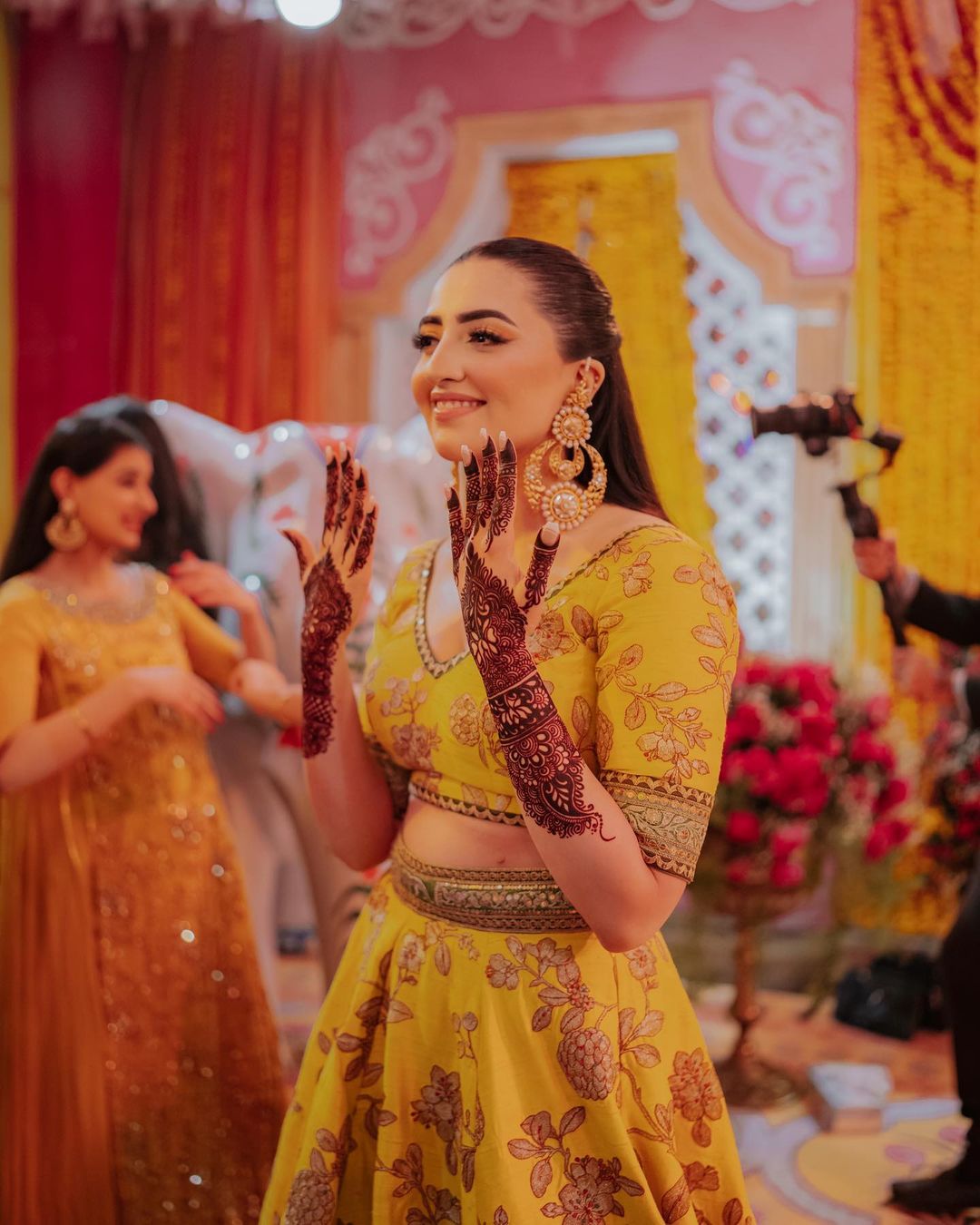 Which look has grabbed your attention? Would you like to bookmark any of Neha's wedding looks from the above? Let us know!