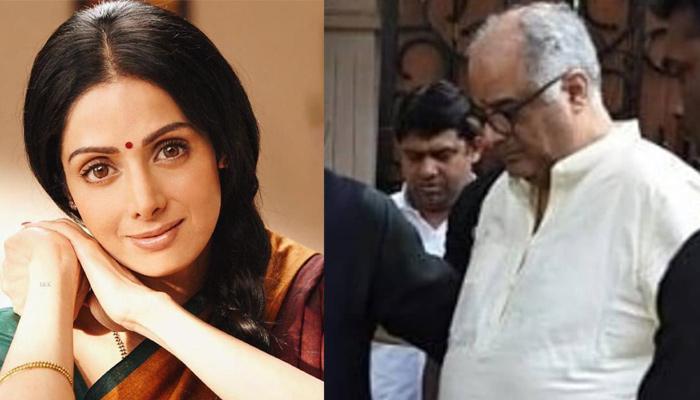 February 24, 2018, was the most shocking day for all Bollywood fans. It was on this very day that we woke up to the news of passing away of a legend, who had many more years to see. ‘Sridevi no more’ said most of the headlines, with a smiling picture of the actress. A day later, pictures of the actress draped in India’s tricolored flag, with her family members looking gloomy by her side, gave us the sight that none ever wanted to witness. (Do Read: Kartik Aaryan Thinks Nobody Will Go On A Date With Him, So He Shares The Pic Of His Valentine)

Time flies by fast and it will soon be one year since the legendary actress passed away. We had earlier shared with you that the Kapoor clan is looking forward to hold puja in memory of Sridevi’s mrityu tithi, which falls on February 14, 2019, though the date being February 24. A DNA report consisted of details of the same and shared that the prayer would be held at the actress’s maternal home. It was also shared that Boney Kapoor, children, Janhvi and Khushi, Arjun and Anshula, Anil Kapoor and wife, Sunita Kapoor will be a part of the puja.

And as per the latest update, Boney and his brother, Anil have reached Chennai for Sridevi’s barsi. The stars were clicked by the paparazzi for the same, who were all decked in white. As per a Pinkvilla report, Boney had gotten very emotional during the puja. Checkout some pictures grabbed by the paparazzi.

This is not the first time when Boney Kapoor got/looked emotional while paying the tribute to his beloved wife, Sridevi. Remember how, at the 19th International Indian Film Academy (IIFA) Awards, it was a difficult and emotional moment for Boney Kapoor when he went onto the stage and received the ‘Best Actress’ award on behalf of Sridevi. Unable to hold onto his emotions, tears of melancholy and pride rolled down his cheeks as he held the award on his hand. He said with tears in his eyes, “I miss her every moment of my life”. His son Arjun Kapoor and brother Anil Kapoor, immediately rushed to the stage to comfort Boney. Anil had held the mike and said, “She was a true genius. The country, the world and our family misses you.” (Also Read: Sara Ali Khan Moves Out Of Mom Amrita Singh's House, Shares A Glimpse Of Her 'New Beginnings')

In an interview, Boney Kapoor spoke about his insurmountable loss when they lost Sridevi. He shared, “I am trying to be both a mother and a father to my children.” He further added, “She was suddenly gone. These past months have been very difficult. Everything went on a freeze-pause in our lives. There were so many things left unsaid and undone. Now I am finally picking up the pieces again trying to put my life together for my children’s sake. There were things that were put on pause. I am trying to resume my life. I am yet to come to terms with the fact that she’s gone forever.”

Soon after Sridevi passed away, husband Boney Kapoor had written a heart-wrenching letter to his wife. The same could be read as, “Losing a friend, wife and mother of your two young daughters is a loss inexplicable in words. I would like to express my sincere gratitude to my family, friends, colleagues and well-wishers and all of you countless fans of my Sridevi who have stood by us like rocks. I am blessed to have the support and love of Arjun and Anshula, who have been such pillars of strength for myself, Khushi and Janhvi. Together, as a family, we have tried to face this unbearable loss.”

The letter concluded with, “To the world, she was their Chandni the actor par excellence…their Sridevi but to me, she was my love, my friend, mother to our girls my partner. To our daughters, she was their everything their life. She was the axis around which our family ran.” (Must Read: Ridhi Dogra-Raqesh Bapat, Post Separation Enjoy 'Night Routine' With Pals Sanaya Irani, Mohit Sehgal)

For the uninitiated, Boney Kapoor is planning to make a biopic on the life of Sridevi. Speaking about the same, a source shared with Deccan Chronicle, “He’s definitely planning to tell Sridevi’s story in a movie before anyone else does. Believe me, there are several filmmakers planning to make films on her. Before they get down to it, Boney wants to copyright her life story so that only he will be able to make his wife’s bio-pic the way he wants to.” The source further added, “Several journalists and authors have approached Boney and he may very soon select someone to write on Sridevi. There are many plans to further the Sri legend in 2019.”

It is going to be one whole year when the world would have mourned for the loss of a legend. We pray for the family’s strength!