4 Bollywood Love Stories That Ended On A Bad Note

4 Bollywood Love Stories That Ended On A Bad Note 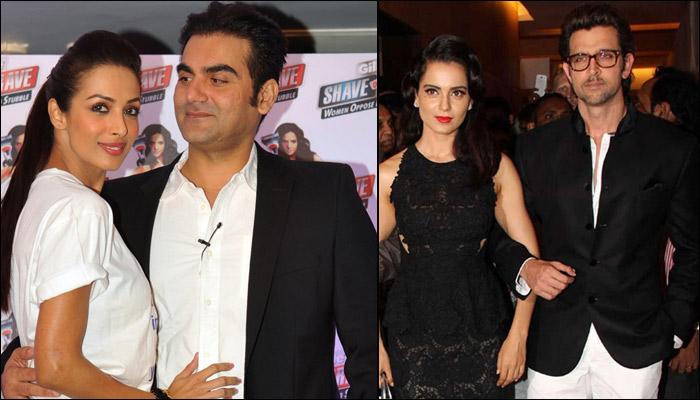 Break-ups and link-ups are something that are not new in Bollywood. Every now and then, some or the other celebrity is in the news for their affair or break-up. While some break-ups happen amicably, there are some splits that end up on a bad note.

Want to know which all tinsel town stars' relationships turned ugly? Well, here is the answer.

Well, let us be honest! The separation of one of the sweetest couples of Bollywood, Malaika Arora Khan and Arbaaz Khan after 17 years of marriage came as a shocker. Although, the news of their possible separation was doing rounds for quite some time, but Arbaaz denied such claims every time making every one believe that all is well in their love paradise.

According to some reports, Arbaaz’s dropping career graph, his living under the shadow of Salman Khan, in-laws wanting Malaika to lead a simple domestic life, and her alleged affair with a businessman were the reasons behind the split. Now, the couple have issued a joint statement denying these claims as “wrong, malicious information”, but have accepted about their split, saying:

“We are taking out time to figure out our lives... Yes, it’s true that we are separated, but where our lives go and what transpires between us, it is for us to decide.”

Also See: 12 Bollywood Celebrities And Their Link-Ups With Foreigners

Kangana and Hrithik’s alleged relationship is now out in the open, and it is turning ugly day by day.

According to reports, the duo started dating while shooting for Krrish 3. Their affair lasted for two years, but it ultimately came to an end when Hrithik denied their relationship in public that did not go down well with Kangana. Their alleged relationship turned ugly after the actress referred to Hrithik as her ex in an interview about how Hrithik got her ousted from Aashiqui 3:

“I don't know why exes do silly things to get your attention. For me that chapter is over and I don't dig graves.”

To which Hrithik tweeted:

"Ther r more chances of me having had an affair with d Pope dan any of d (Im sure wonderful) women d media hs ben naming. Thanks but no thanks."

And, this was it! His statement added fuel to the fire and started the battle of the alleged exes! From sending legal notices to blaming each other for wrongdoings, this alleged ex-couple has done it all.

Do Read: The Incredible Diet And Workout Regime Behind Hrithik Roshan's Fab Body

Salman and Aishwarya started dating while shooting for Hum Dil De Chuke Sanam, and things were going quite well between the two. But, soon things turned nasty when Salman started physically and verbally abusing the former Miss World many times in public and private, resulting in a pretty bad break-up. And soon after, a new love story blossomed on the sets of Kyun! Ho Gaya Na between Aishwarya and Vivek.

Vivek even called a press conference and accused Salman for threatening him and his ladylove. But, soon things went kaput between the two when their movie bombed at the box office.

They met, fell in love and thus began their romance, although Ness’ mother, Maureen Wadia, was not happy with their relationship. Their relationship ended in 2009 after Ness allegedly slapped Preity in a party. However, the duo remained friends and co-owners of IPL team, Kings XI Punjab. But on May 30, 2014 the crack between them was seen by everyone when Ness “shockingly grabbed Preity's hand and started to abuse her in front of everyone present.”

This was the last straw after which the actress filed a police complaint on June 13, 2014 stating that Ness:

“tried to abuse me and used extremely derogatory language and tried to behave in a manner where I was put to shame in front of my colleagues, friends and family. I say that Ness Wadia has gone to the extent of threatening me with dire consequences and intimidating me by boasting of his political clout and connections.”

Although, Ness released a statement saying that the allegations were “totally false and baseless.”

Recommended Read: 8 Cutesy Moments Of Abhishek Bachchan And Aishwarya Rai That Prove They Still Adore Each Other

Although, love is the most beautiful feeling, sometimes things go wrong to such an extent that the relationship is beyond repair. But, no matter how bad the break-ups have been, our Bollywood stars have emerged stronger than before. Love surely is unpredictable, isn’t it?