6 Bollywood Actresses Who Wore Manish Malhotra Outfit On Their Wedding

Ever since he has ventured into mainstream designing with his couture store, he didn't look back. It’s been quite a long time that this man has been reigning in the fashion industry and his label is one of the most loved and acknowledged ones. We are talking about none other than the very talented, hardworking and one and only Manish Malhotra. With a number of prominent awards in his kitty and a long (like literally long one!) list of the films he has designed clothes for, Manish is a gem in the fashion world.

Recommended Read: 10 Bollywood Divas Who Wore Sabyasachi And Looked Awe-Inspiring On Their Wedding 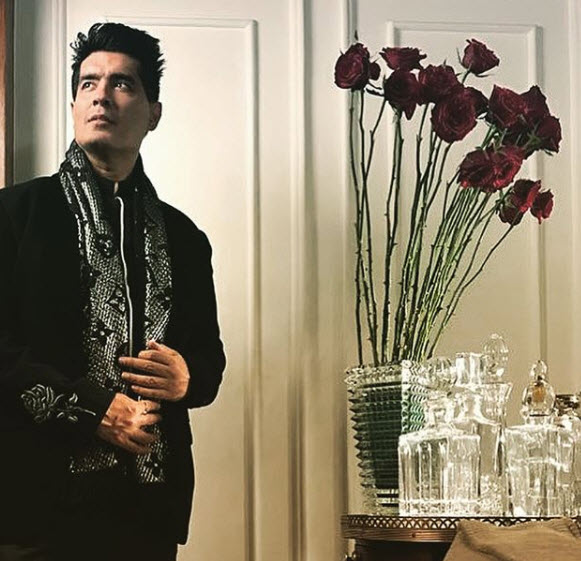 Manish knows exactly how to raise the bar and make the best clothes of all times. The royalty and grace that he has always added in his workpieces, or for that matter, the combos of the jewellery that he makes, everything is just on point and to die for. Girls over the counter always dream to wear his creations at least on their wedding day. Courtesy, the fact that he is one of the finest fashion designers that the Indian film fraternity boasts of. Here we have a few lucky actresses who got to wear Manish Malhotra on their D-day. 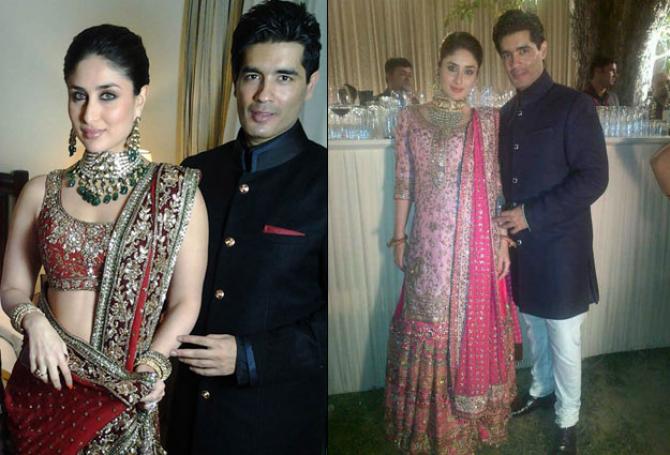 She is the one with grace and piousness, the one who quintessentially manages to match her Begum status. The mention is of none other than the one and only and everyone’s favourite Kareena Kapoor Khan. But do you know whom she just loves when it comes to designers? Manish Malhotra, it is! In fact, for her wedding reception, the actress chose no one but Manish and looked stunning in his creation. Kareena dazzled in a burgundy-coloured lehenga with contrasting maroon dupatta for which cost her whopping 50 lakhs rupees. To look like a graceful dulhan, she completed her look with royal looking gold and Kundan jewellery. On her Delhi reception too, she picked up Manish and looked stunning in a pink gharara paired with traditional jewellery. 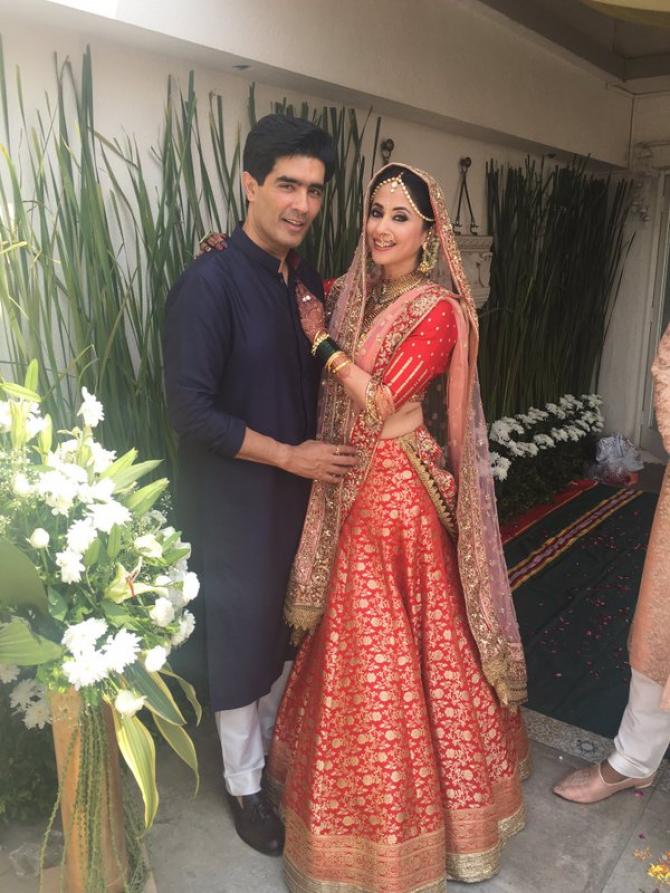 Urmila Matondkar, the ever-so-gorgeous and pretty damsel looked no less than a dream on her wedding day. The actress emitted beauty all around with her striking bridal attire. Urmila wore famous Bollywood designer Manish Malhotra’s creation looked like million dollars. She wore a red-coloured saree lehenga and teamed it up with contrasting green-coloured glass bangles and gold and Kundan jewellery. The striking lehenga by Manish Malhotra cost her whopping Rs 4.50 lakhs.

You May Also Like: Wedding Story Of Urmila Matondkar Who Got Married To A Kashmiri Businessman, Mir Mohsin Akhtar 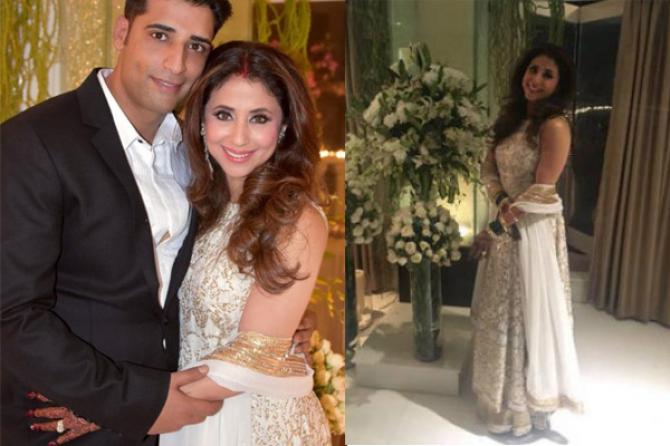 Not just for her wedding ceremony, Urmila chose Manish Malhotra to design her reception outfit as well. Urmila broke the rule of brides not wearing white. She chose a gorgeous white and golden ensemble, designed by her dear friend, Manish Malhotra. It was a heavily embellished long anarkali, along with a heavily embellished skirt and dupatta that she adorned herself in for her reception. Completed her look with statement earrings and traditional green bangles worn by Marathi brides, Urmila looked like an angel in white. 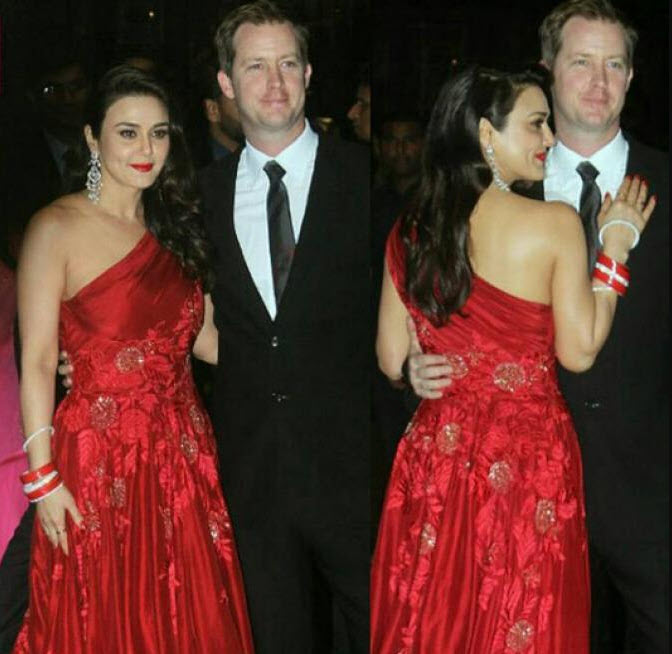 The dimpled beauty of the showbiz world, Preity Zinta, took the wedding vows with her long-time boyfriend Gene Goodenough in a hush-hush ceremony. Preity and Gene had a lavish reception in Mumbai for her industry friends for which she chose to wear Manish Malhotra. She sported a gorgeous single shoulder gown in red colour, designed by Manish Malhotra. Though the actress skipped on to the jewellery, she did wear statement earrings in diamonds. Kept her hair open and makeup minimal, Preity nailed it at her wedding reception! 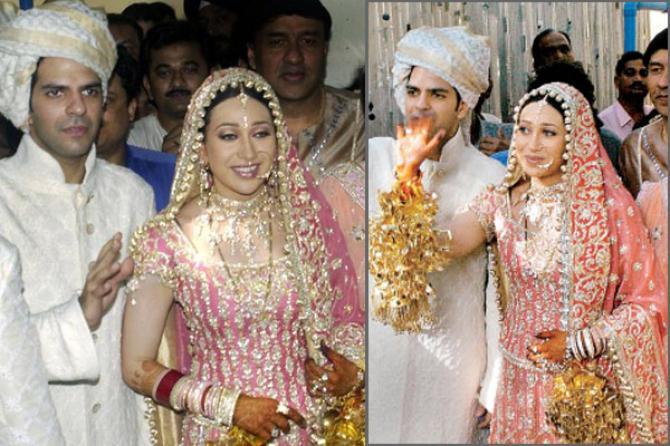 Karisma Kapoor tied the knot with her childhood friend and a businessman, Sunjay Kapoor on September 29, 2003. Just like Kareena Kapoor, Manish Malhotra is loved by her sister Karisma Kapoor too. Karisma wore a beautiful pink-coloured lehenga that had heavy golden embroidery on it. Not just this, for Karisma's wedding, even Kareena and mom Babita’s outfits were also designed by the man himself.

Don't Miss: 6 Bollywood Celebrities Who Got Married Not Once, Not Twice, But Thrice 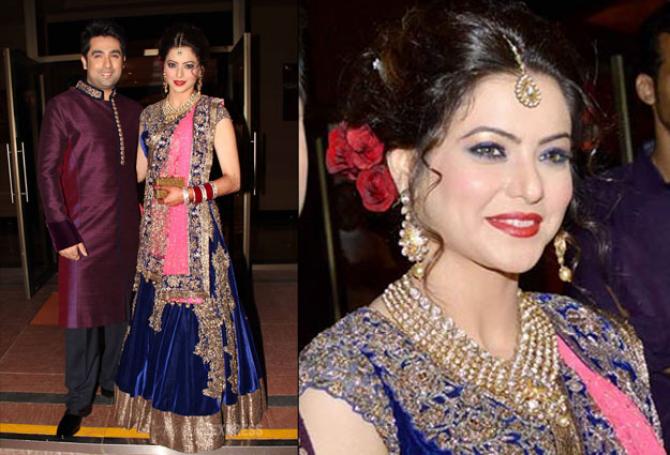 One of the most loved and famous Bollywood actress Aamna Sharif too opted for Manish Malhotra on her big day. Aamna Sharif wore a beautiful dark blue velvet lehenga with pink dupatta. A Manish Malhotra creation, the pretty lehenga that she chose to wear had a bold bronze embroidery on it. And, the actress looked truly stunning as she completed her look with heavy Kundan jewellery. The ebullient Genelia D'Souza chose to wear Manish Malhotra on her sangeet ceremony. Genelia wore a beautiful heavily embellished Manish Malhotra lehenga in white colour that had awesome highlighted work and contrasting borders. She looked like a million bucks in this attire by Manish and it was on this function only she performed with Riteish on a Marathi song, Kombdi Pallali.

Recommended Read: 11 Most Loving Celebrity Husbands From Bollywood Who Are Real Heroes To Their Wives

These were a few Bollywood divas who chose to wear Manish Malhotra creation and looked pretty stunning in them. What’s your take on this? Just let us know in the comments section below!