Bollywood actresses who flaunted their expensive engagement rings with 'swag'.

Some women can actually have it all, right from desirable proposals to perfect sparkling rocks on their fingers, and dream weddings too. And, who else than our Bollywood divas, who serve as the best examples in this arena. True that they have all of this in addition to good looks, best ensembles, loving fans and fame. When they get hitched, they made sure to do it in style. Right from their engagement rings to guest lists, and buzz around the wedding, everything seems just perfect.

13 Stunning Looks Of Bollywood Actresses At Their Sangeet Ceremony Bollywood actress Asin was seen sporting her engagement ring at Salman Khan’s birthday party. The ring's value is estimated to be Rs. 6 crore. The ring was designed by one of their common designer friends, and the 20-carat solitaire in it has been imported from Belgium. Apart from this, the ring has a monogram of Asin and Rahul's initials (AR) on it. And, Rahul has also got a personal message engraved on it for Asin. 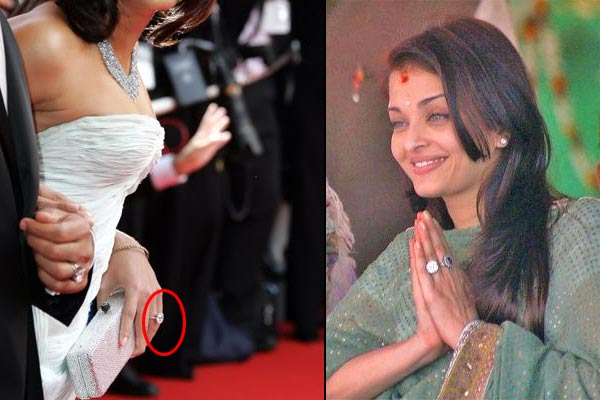 Let us start with one of Bollywood's most beautiful ladies, Aishwarya Rai. Her marriage with Abhishek Bachchan became the talk of the nation and overseas too! Everyone was glued to their television sets just to get a glimpse of the celebrations. Abhishek gave his wife a 53-carat solitaire that almost blinded everyone. Nothing less for the former Miss World. 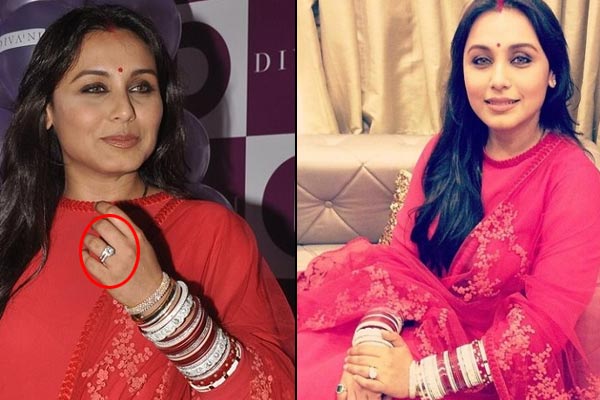 Rani Mukerji and Aditya Chopra were never vocal about their relationship. They kept everything under wraps. But, suddenly at an event, a big, shiny rock on Rani's finger said it all, although, she later tried to hide it. And, after her wedding, Rani Mukerji, beautifully flaunted the ring! 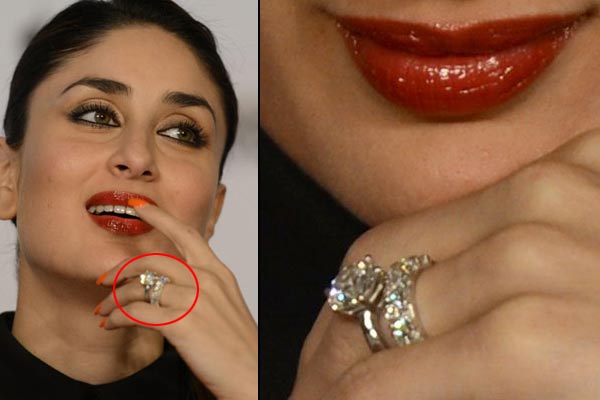 When Kareena married the Chote Nawab, Saif Ali Khan, what came up was two of the most powerful surnames of Bollywood (Kapoor and Khan)! Not only this, what also followed suit was a huge 'stone' as well. A big solitaire in a platinum band, simple and stylish. Royalty at its best! 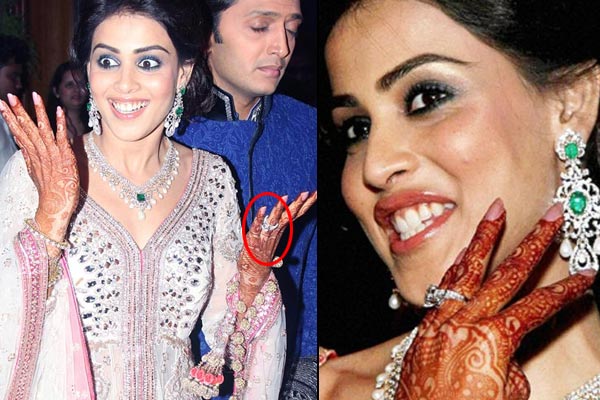 Genelia D’Souza and Riteish Deshmukh make the cutest couple in Bollywood. Their courtship period of more than eight years, finally culminated into marriage, when Riteish proposed to his lady-love with a sparkler. And, Genelia never shies away from flashing it. 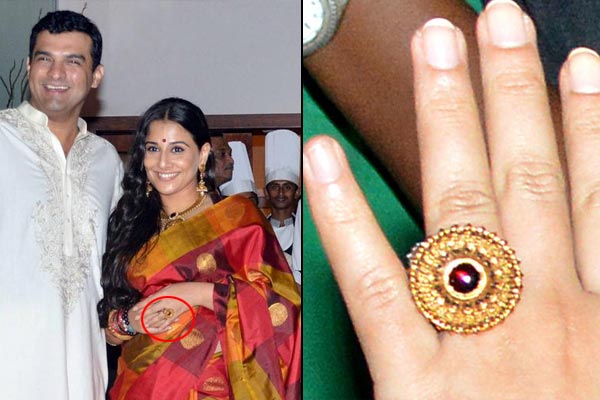 Vidya Balan is an actress of substance. Keeping in mind her unique choices, husband Siddharth Roy Kapur, gave her an antique ring in pure gold. The ring has a ruby in the middle that just furthers its charm. 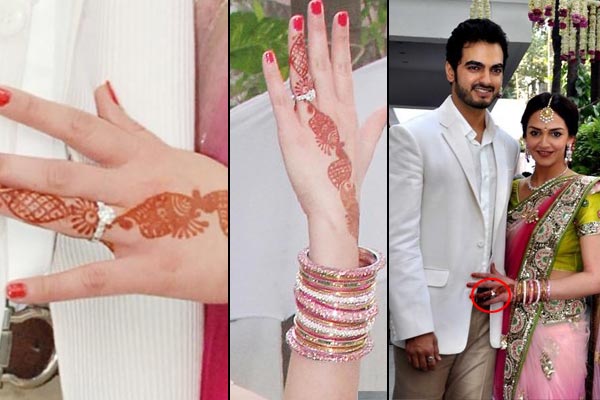 Esha Deol got engaged to her then boyfriend, Bharat Takhtani, with an eternity band. It had a solitaire in the middle and many little diamonds studded on the band. The best part, she got another sparkler on her wedding day! When Shilpa Shetty presented her wedding band to the public, many hearts skipped a beat. A 20-carat solitaire rumoured to be worth INR 3 crore. Woh! It is definitely a larger-than-life diamond. 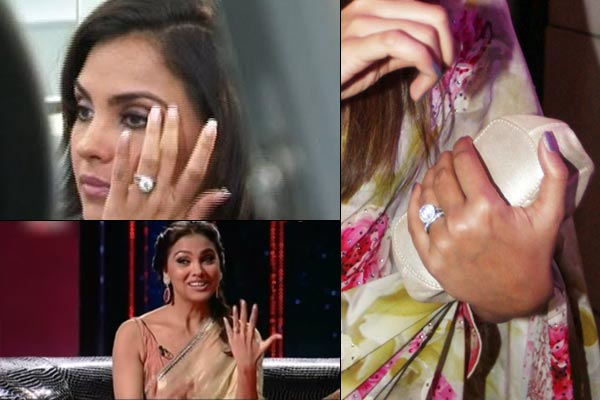 Mahesh Bhupathi proposed to Lara Dutta in New York, while the two were having a candle-lit dinner. As if this was not enough, her 4-carat engagement ring, designed by the man himself, made it easy for her to say yes! Lara completely fancies her ring and calls it her favourite piece of jewellery. She showed off her engagement ring, while she was on Karan Johar's show, Koffee With Karan. 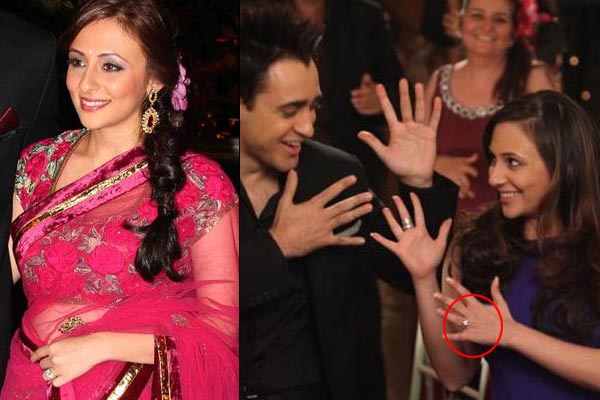 Well, Avantika is not a Bollywood actress, but her husband Imran Khan gives her due credit for his fame. And, her ring really deserves to be featured here. Avantika Malik and Imran Khan fell in love at a tender age. These teen lovers, were successful in giving a name to their relationship. Imran sneaked inside Avantika's room, decorated it and then, went down on one knee to propose to her. He himself designed the ring for her as he wanted his fiancee to have something unique. 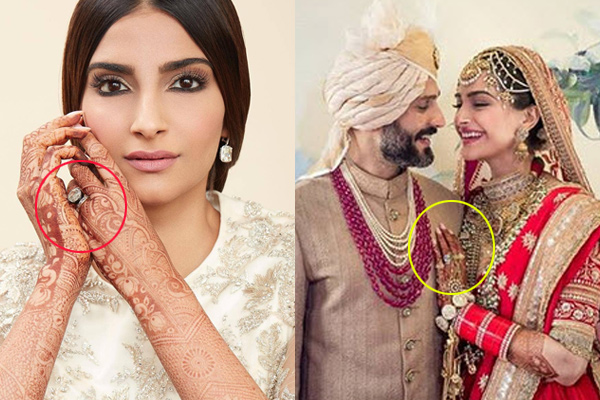 Her wedding was a nationwide celebration. Her dresses were something that every bride-to-be must be fascinated with. Her smile is worth a million dollars. Yes, we are talking about Mrs Sonam Kapoor Ahuja. The diva looked no less than an angel at her wedding. And why wouldn’t she? It’s Sonam Kapoor after all! But did you notice something more invaluable which has taken a permanent residence at her finger. Yes again! Her engagement ring! Her hubby, Anand S Ahuja, gifted a ring worth a whopping Rs 90 lakh to her. Phew! Go green with envy all of you. The Virushka wedding was paparazzi to another level altogether! From a wedding that every girl dreams of, to star-studded receptions, Anushka Sharma and Virat Kohli’s wedding is still the talk-of-the-town even after 5 months. While the Pari actress looked dreamy in everything she wore, what caught our fancy was the beautiful diamond ring given to her by hubby, Virat. Do you know how much her ring costs? A crore! 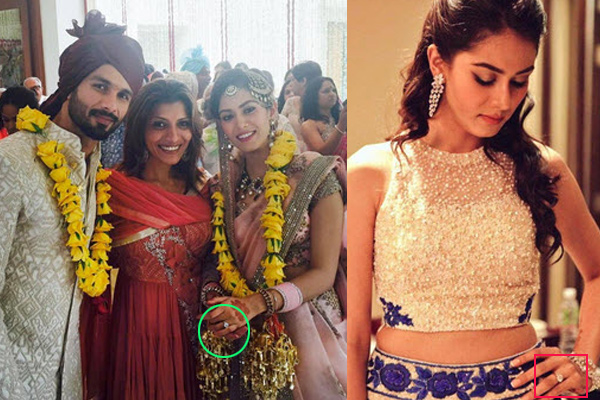 The beautiful Delhi girl broke millions of hearts on July 7, 2015, when she called Shahid, her ‘forever’! Their wedding was a hush-hush affair where both the bride and groom looked resplendent in hues of white and pink. But let’s come to the point, her engagement ring! The super-romantic Shahid Kapoor proposed to Mira with a stunning Nirav Modi solitaire ring worth Rs 23 lakhs. Wow! Kim Sharma might not have made it big to Bollywood but she has certainly been part of superb projects. The Mohabbatein actress was happily married to Ali Punjani, where she solely devoted all her time to her then-hubby and his chain of hotels. The couple has reportedly parted ways but her engagement ring is still the talk of the town. The actress was always found flaunting a huge diamond on her ring finger which weighed 13 carats! Hold your breath, guys!

Do Checkout! 15 Bollywood Actresses Who Wore Striking 'Matha Patti' And 'Maang Teeka' Designs On Their Wedding 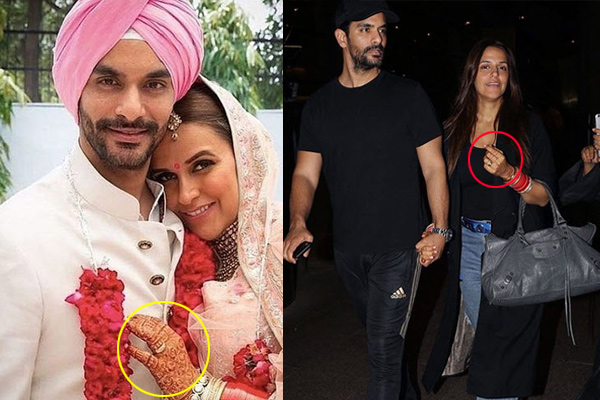 Qayamat girl, Neha Dhupia married her ‘best-friend’, Tiger Zinda Hain fame, Angad Bedi on May 10, 2018 at a hush-hush Anand Karaj wedding. In spite of their sudden decision to tie the knot, both Neha and Angad made sure that they enjoy to the fullest and that they look their best on one of the most important days of their lives. And they totally killed it, didn’t they? Okay yes, we are coming to her engagement ring! By the way, there is an interesting story behind both of their engagement rings. And, we bet you can’t guess the price of the rings? Do you know why? Because it’s ‘priceless’! Yes, the ring that both Neha and Angad are sporting have been passed on from the last two generations. Neha and Angad is the third generation couple from their family who is wearing the rings. How cool is that!

Their husbands really love them, and were not afraid of spending any amount on the love bands for their ladies. Which one did you find the prettiest of all, do tell us in the comment section below!

Next Read: Jewellery Essentials For Hands And Arms That Give Bride A Princess Look On Her Wedding Functions

13 Stunning Looks Of Bollywood Actresses At Their Sangeet Ceremony