In the recent episode of 'Bigg Boss 15', Karan Kundrra age-shamed his housemate, Shamita Shetty and called her 'Aunty'. Now, her close friend, Neha Bhasin slammed Karan with a long note.

The popular reality show, Bigg Boss 15, is finally here, and just like every season, the fights and high-voltage drama has already set Twitter's trending charts on fire. While everything was going smooth inside the Bigg Boss 15's house on Day 1, a misunderstanding had occurred between Jay Bhanushali and Simba Nagpal, after which the latter had age-shamed Jay on the show. Since then, we have seen more instances of such indecent behaviour on the show, which isn't something common even with a show as controversial as this.

Once again, the topic of age shaming is in the headlines, and the contestant who has received backlash for doing the same is Kitani Mohabbat Hai actor, Karan Kundrra, who has called his housemate, Shamita Shetty 'aunty'. The same video clip is doing rounds on social media and is irking people to the core of their hearts.

In the recent episode of Bigg Boss 15, Pratik Sehajpal and Jay Bhanushali indulged in a war of words that later transformed into an ugly fight. After which, Karan Kundrra and other housemates jumped in-between them. Seeing the fight and the atmosphere of the house, Shamita walked away from the scene, and it was Karan who believed that she had called everyone 'classless'. After which, the actor not only abused her from behind but also age-shamed her by referring to Shamita as 'aunty' during his conversation with Nishant Bhat.

Well, Karan Kundrra's remarks on Shamita Shetty have not gone down well with the netizens, and the whole of Twitter is buzzing with the people's furious reactions towards his age-shaming remarks. Joining the queue of netizens lashing out at Karan is Shamita's close friend, Neha Bhasin, who took to her Instagram handle and dropped a picture of a long note in which she schooled Karan for his disappointing remarks. In the same note, Neha also took a stand for Patik Sehajpal after Jay Bhanushali called him 'chotey' and abused him during their intense fight on the show. 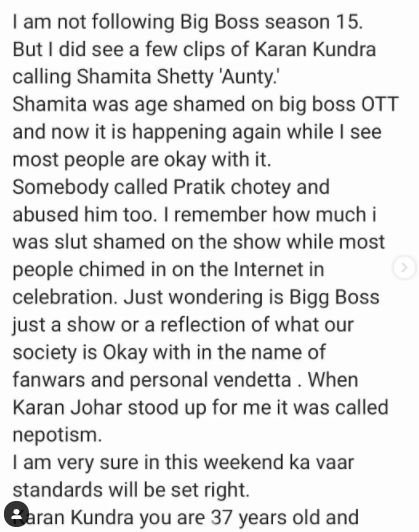 Along with the note, Neha Bhasin also penned a short note in the caption, in which she advised Karan Kundrra to grow up and told Jay Bhanushali not to disappoint her with his cheap antics again, as she still holds some faith in him. Her caption can be read as "Karan kundra kindly grow up and stop targeting @shamitashetty_official on Bigg Boss. Calling grown up women Aunty is become a, lame way of shaming them when you are 37 yourself. Calling @pratiksehajpal chotey and abusing his mother are cheap tactics to hit below the belt @ijaybhanushali I really liked you in the opening and I hope you come through cleaner on the show. I hope fans don't engage in fan wars and for once stand by what's right." 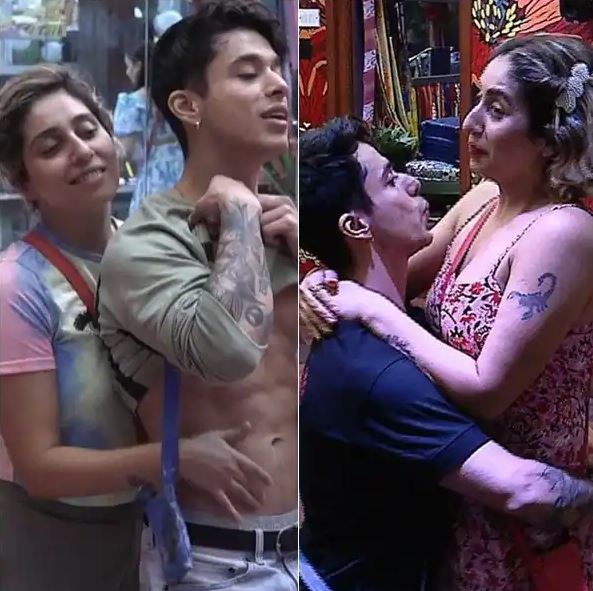 Earlier during her stay inside the Bigg Boss OTT, Shamita Shetty was allegedly age shamed by Akshara Singh on the show. 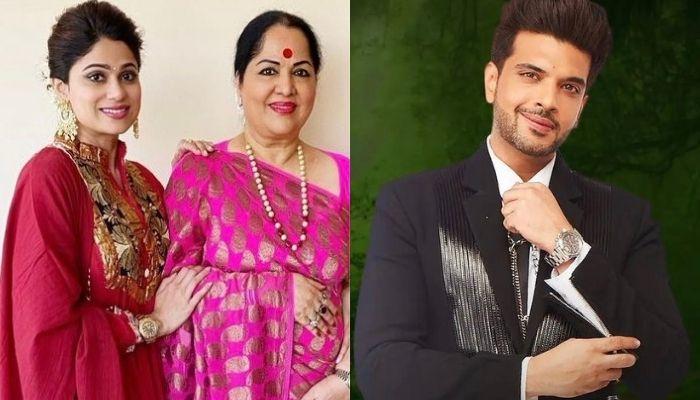