Famous dancer and actress, Sapna Choudhary posts pictures of herself donning the 'sindoor' and questions about her marriage have started flooding all over the social media. 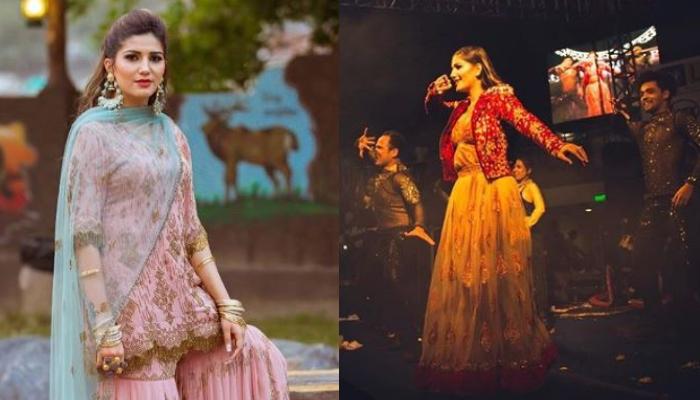 Over the years, we have seen the popular show, Bigg Boss giving number of moderately famous people a massive leap of fame and success through their time on the show. The platform has allowed them to create some space in the hearts of millions of people out there. One amongst those celebrities is famous dancer, actress, and the queen of Haryana, Sapna Choudhary. With her outstanding performance in the reality show, Sapna had won millions of hearts during her time in the house. (Recommended Read: Shibani Dandekar Describes Beau, Farhan Akhtar In Three Words, Tells A Lot About Their Relationship)

While the actress never shies away from saying what she believes in, it is her love life which she doesn’t like to talk about in media. But her recent pictures in sindoor have once again flooded the headlines with the questions about her marriage. Scroll down to take a look!

On July 25, 2020, popular dancer and actress, Sapna Choudhary took to her Instagram handle and posted four gorgeous pictures of her in a yellow-coloured suit. The beautiful actress can be seen posing for the camera with her trademark adorable smile in her sun-kissed pictures. But what caught everyone’s attention was the holy sindoor in her maang. As soon as the pictures have made their way live on the internet, Sapna Choudhary’s fans are asking just one question, ‘She got married in the lockdown?’ However, along with these pictures, Sapna wrote a poetic caption, and it can be read as “Beemar Hain Vo Hume Muskuraata Dekh Kar, Dhund Doo Hakeem Koi Unke Leye.” Take a look!

For the uninitiated, Haryana’s pop queen, Sapna Choudhary is a cultural icon for every girl of this country, who dreams of making a name for herself in the industry. The actress had risen to fame when one of her dancing videos on the popular song, Teri Aankhya Ka Yo Kaajal at a local event had gone viral on the internet and has over 378 million views on YouTube. However, the popular dancer has dodged the questions about her marriage a lot of times in the past. Once in a quick media interaction, Sapna Choudhary had said, “I will get married, when I’ll find a suitable person. But as for now, I’m not interested in marriage and is looking forward to my own production house.”

However, back in January 2020, according to a regional news channel, VK News, it was reported that the actress is going to get married this year with someone from her state, Haryana. But seeing the ongoing crisis of COVID-19 pandemic and no statement from the side of Sapna Choudhary about her marriage plans, it’s quite understandable that it has been postponed for the moment. (Don't Miss: Nupur Sanon's Heartmelting Birthday Wish For Sister, Kriti Sanon Is Every Doting Sister Ever)

Do you like Sapna’s look in sindoor? Let us know!