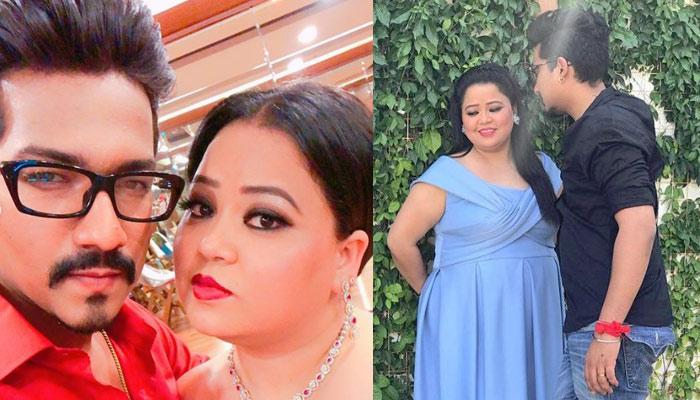 Bharti Singh who shot to fame through her commendable way of poking everyone’s funny bone through Comedy Circus is one happily married woman. The comedienne walked down the aisle with her long-time writer-boyfriend, Haarsh Limbachiyaa on December 3, 2017. The two married in a destination wedding in Goa and their functions went on for three long days. (You May Also Like: Sana Khan, Ex-Bigg Boss Contestant, Finds Love In Gauahar Khan's Ex-BF Melvin Louis)

In an in exclusive chat with famous online portal Pinkvilla, Bharti Singh got candid about her wedding with Haarsh, the equation they share and much more. When asked if she believes in Valentine's Day, she was quoted as saying, "Of course, we are both shooting (laughs). Actually, we haven't ever given enough importance to Valentine's Day. In fact, Harrsh keeps giving me gifts and when he gifted me a bouquet recently, I told him that you should have given it to me on Valentine's Day. However, he said that I won't look at Valentine's Day to give you a gift, or your birthday.”

And further added, “If I honestly tell you, it has been one year since our marriage and every day has been Valentine's Day, every day has been Diwali. Haarsh pampers me a lot, and he keeps giving me gifts; he is the kind who'll get expensive gifts while I am a little on the miser side. Two weeks back he brought me a Michael Kors bag and I was like how I will take it in the flight, they'll spoil it, and he was like so what, it's okay. It's just that's how it is, and he doesn't see birthdays or occasions for gifts, after all we work so much and earn so much. Hence, we don't have any plans, and we aren't even excited about such things anymore." (Also Read: Ranveer Singh Supports Father-In-Law, Prakash Padukone Along With Deepika At An Award Function)

Bharti was further asked about their bond and how things have changed for her post-marriage. On this note, she revealed that when people stay as husband and wife, they end up fighting with each other and then gets back as friends by the end of the day. In Bharti’s own words, "We are more like Gully Boyfriends, and talk about anything, right from drinks to so many others, we balance each other out. When you stay as husband and wife, you end up fighting, but when you become friends, you fight in the morning and you patch up by the end of the day. Before we fell in love, we were friends only. I am really enjoying marriage, because, for seven years, we used to long for each other. Of course, we used to shoot together. Even today, it has been 13 months since our marriage, and when I get up, I am in complete awe of him and wonder 'Haaye, meri shaadi ho gayi isse!' Even today, we have the same love, same trust, and the same romance that we had on the very first day of marriage. *touchwood*"

Reminiscing about the special gift and that they don’t believe in special days for showering each other with gifts, Bharti quipped, "I am not someone who knows a lot of brands, and it has been 10 years since I am in Mumbai, but I am just not enough into brands. I still remember, 7 years back, he brought me an LV bag, and this is when I didn't even know well what it is. Two and a half years back too, he brought me a Rolex watch, and I remember everything. But he doesn't need Valentine's day or a birthday to give me gifts, he'll get them whenever he pleases." (Must Check: Janhvi Kapoor And Khushi Kapoor Attend Puja For Late Sridevi In Chennai, Ahead Of Death Anniversary)

What would be the one thing she would give to Haarsh, and Bharti was quoted as saying, "If I am completely honest, his birthday just went by on January 30, and I never know what to gift him, so you know I always give him some cash, or I give him my card, and I tell him to spend how much you want and buy whatever you want. But, he never buys anything only."

Furth sharing that their love for each other is unconditional, the comedienne remarked, "We aren't those kind of couples who go shopping together and wait for each other to show how what piece of clothing looks. Once we reach the mall or wherever we are going, we go different ways so we do our own shopping. Neither of us tries clothes out and show it to each other, we both always like each other's choices.” (Must Check: Karisma Kapoor Shares A Perfect Family Pic On Randhir Kapoor's Birthday, Taimur Ali Khan Was Missed)