On the occasion of Bhai Dooj, Shilpa took to her IG handle and shared a cute video of her kids, Viaan and Samisha celebrating Bhai Dooj. Check out the video inside! 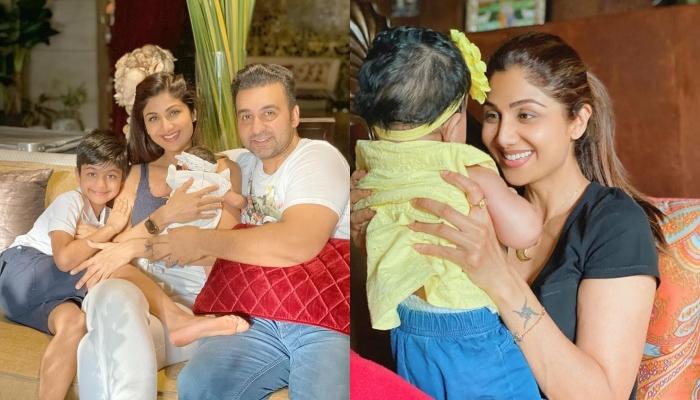 One of the fittest mommies of the glamour world, Shilpa Shetty Kundra had given a sweet surprise to her fans by embracing motherhood for a second time at the age of 45, via surrogacy. In February 2020, Shilpa Shetty Kundra and her husband, Raj Kundra had announced the arrival of their second child, a daughter, and they had named her Samisha Shetty Kundra. (Recommended Read: Soha Ali Khan Shares An Unseen Picture With 'Bhai', Saif Ali Khan From Her 'Mehendi', On Bhai Dooj)

The doting mommy, Shilpa Shetty Kundra had shared a glimpse of her daughter's little hand on her Instagram handle and had curated a post revealing the meaning of her baby's name. She had revealed that "Sa" in Sanskrit is "to have", and "Misha" in Russian stands for "someone like God". Hence, her little girl, Samisha's name personifies goddess Laxmi. Ever since the arrival of little Samisha, every festival has become special in the Kundra-Shetty clan.

On the occasion of Bhai Dooj, Shilpa took to her IG handle and shared a cute video of her kids, Viaan and Samisha celebrating Bhai Dooj. The occasion was even more special because it was little Samisha's first Bhai Dooj. Shilpa twinned with her adorable goofballs in white, and together they looked like angles. The doting mommy wrote in the caption, "The 2 parts of our hearts. Viaan-Raj & Samisha celebrating their first Bhai Dooj. Hearts full of gratitude because my little boy's dream for a li’l sister has come true. His happiness today is so evident in his radiant smile. Thank you, Universe. @rajkundra9. #BhaiDooj #ViaanRajKundra #SamishaShettyKundra #gratitude #brothersister #family #blessed #siblings."

On the occasion of her daughter, Samisha's first Raksha Bandhan, Shilpa had shared a heart-warming note. She had posted a dreamy picture and had written, "Today and this moment is sooo special for us all, as Viaan-Raj and Samisha celebrate their first Rakhshabandhan They say, 'our siblings are our first best friends', right here is the be ginning of a 'forever' kinda friendship Viaan-Raj has always wanted and prayed for a lil sister - and his dream and ours has come true, making today extra special. I'm glad that they will always have each other to fall back on... someone to love unconditionally, talk to , crib about, yet be fiercely protective Tell your sibling today, how much you love them; and if they're around you, don't forget to give them a tight hug! Happy Raksha Bandhan to my Instagram #HappyRakshaBandhan." (Also Read: Sara Ali Khan Misses Her 'Iggy Potter', Ibrahim Ali Khan On Bhai Dooj, Shares Unseen Pictures)

On Neha Dhupia's show, No Filter Neha, Shilpa Shetty Kundra had opened up on embracing motherhood for the second time. The actress had said, "I think yoga has made a big difference to what I used to be 10 years ago. I remember I did have a few meltdowns after Viaan because when you're this first time mom, it's very daunting and it just hits you. So it was difficult the first time around but now I feel it's like a cakewalk. #Guts to me, I am 45 and I've had another child. I'll be 50 and my child is 5."

Talking about people's reaction when Shilpa had shared her baby arrival announcement, the actress had said that she doesn't pay much attention to them. Shilpa was quoted as saying, "I don't care to pay too much attention for other people's opinions and judgments on me because it's really not their place. I am doing my best as a mother. However people perceive me to be, I really want to bring my child up the way my parents brought us up. The only difference is obviously we were brought up in a smaller home with a lot lesser in terms of facilities but the same amount of love, if not more." (Don't Miss: Krushna Abhishek Won't Perform In The Kapil Sharma Show If 'Mama', Govinda Makes An Appearance)