Bakhhtyar Irani and his wife, Tanazz B. Irani are head-over-heels in love with each other and often share quite enviable pictures. Bakhhtyar tattooed his Tanazz's picture on his back. Love binds us all and this emotion has been omnipresent in the Universe much before mankind started. And when humans came into the world, many people have done the impossible because they are in love. While primitive day love was mostly about eloping with one’s beloved, modern-day love is all about putting up ‘sorry hoardings’ across the town or getting oneself tattooed with their partner’s name. And one of the most stunning couples of the telly town, Bakhhtyar Irani and Tanazz B. Irani once again went a mile ahead to showcase their fondness towards one another. (Do Read: Charu Asopa And Rajeev Sen Celebrate One Month Anniversary Sharing Unseen Pics From Bengali Wedding)

Bakhhtyar Irani and his wife, Tanazz B. Irani are head-over-heels in love with each other and often share quite enviable pictures. The couple is currently holidaying in Phuket and is having a gala time ‘expressing their love' in the most spectacular way. As an expression of love, Tanazz inked her arm with her hubby, Bakhhtyar’s name. Her overwhelmed with happiness hubby took to his Instagram story and proudly flaunted the same with the words ‘Thanks jaan’ and the date ‘15.07.2019’ written atop the picture: 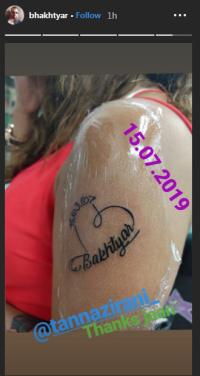 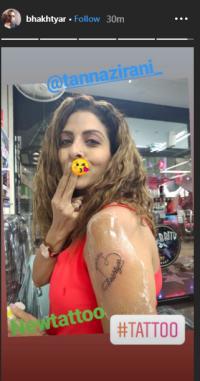 And it was then that Tanazz B. Irani took to Instagram and had shared a couple of images that had blown our minds! Bakhhtyar Irani tattooed his wife, Tanazz B. Irani’s entire face on one side of his back! Tanazz had shared the same with her fans along with a heartfelt note, which she later deleted. Her deleted ‘thank you’ note for her hubby could be read as, “This is how it all started... Many more videos and pics to come... Stay tuned... Excited to show the final result... My tattoo... Thanks @celebrityinktattoophuket This tattoo was a complete surprise for me! My portrait on his back! Unimaginable from a man who is even scared to go for a blood test as he's scared of needles! @bhakhtyar you sat for 7 hours in pain! I salute you and your totally Bepanaah love you have for me and the kids. Very few can understand your passion and love as your a very rare breed. Your ways are alien but there's no man I would rather sacrifice for and share my life with than you! There's obviously something that keeps me with you through all of lives' ups and downs! Blessed! love you @celebrityinktattoophuket thanks for doing such a fab job and inking me into ageless eternity.” Take a look at the picture of the tattoo in the making and the final result: 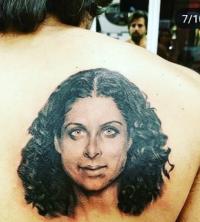 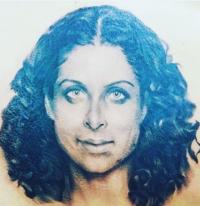 Isn’t that amazing? Tanazz B. Irani has also shared a couple of pictures from their Phuket holiday. Sharing the array of picture, she wrote, "Phuket diaries... Another day off drinking all kinds of juices and walking and talking and eating and talking... just like we've just met each other. And maybe we have. Who knows. After 2 kids and work and routine this is just what the doctor ordered... isn't it. @bhakhtyar it's great meeting you all over again. Wish we had done this before."

It was on March 16, 2019, when Bakhhtyar Irani and Tanazz B. Irani had completed 12 years of marital bliss. For the same, Tannaz had taken to Instagram and had posted a beautiful picture of a wedding ring which she received as a gift from her hubby. She captioned the picture as “It's been 12 years? Love to be with you @bhakhtyar #couplegoals #weddingrings #weddinganniversary #gift”. (Must Read: Sonam Kapoor Ahuja Is Planning To Sell Her Mumbai Flat And Shift To London Full-Time With Anand?) 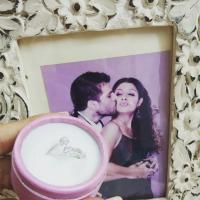 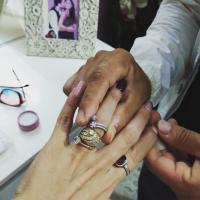 For the uninitiated, this is Tanazz B. Irani’s second marriage. The Kaho Naa… Pyaar Hai actress had gotten married at the age of 20 to a famous stage drama artist, Farid Currim. After facing a lot of struggles, their relationship worked out when they were about to have a daughter, only to fall out later, post her birth. Post her divorce with Farid, she entered the showbiz industry and gained huge popularity. And it was in the year 2006, when Tanazz met Bakhhtyar Irani on the sets of Fame Gurukul and fell in love. Bakhhtyar had a hard time convincing his family to get him married to Tannaz since she is 8 years older to him, but it was his sister, Delnaaz Irani who came to the rescue and thus, Tanazz and Bakhhtyar are now, a happy family of four! 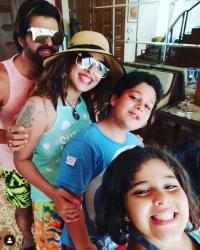 In an interview with the Mid-Day, Tanazz B. Irani had spoken about the essential ingredient of a couple in sustaining a happy marriage. She had shared, "Come what may, trust between the couple is of utmost importance, especially if both parties work long hours. I think this is most crucial to ensure stability in the marriage and both have to strive to live up to it." Talking about marriage, Tanaaz had said, "I think marriage is about the coming together of two families. Both have to accept the good and bad in each other. Sometimes you have to show appreciation, at others, make some compromises. I think remembering family members' birthdays; calling up relatives once-in-a-while goes a long way in forming strong ties." (Also Read: Katrina Kaif Receives A Heartfelt Birthday Wish From Her Ex, Ranbir Kapoor's Girlfriend, Alia Bhatt) 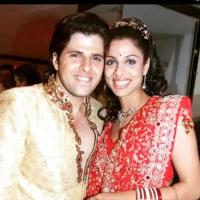 Tanaaz Irani had also added, “Love surpasses all differences. Even if there are things that I don't like doing, I do them just for my husband. For instance, if Bhakhtyar wants me to go with him to a party and I'm irritated because I don't want to go, I'll still end up going because it means a lot to him.” No matter how perfect a couple looks, there will always be fights. Tannaz had shared an invaluable lesson about the same, "There has to be respect between the husband and wife. Even when you fight, I think you need to make up your mind about what you want to say. Never hit below the belt; there has to be decorum to the fights. After all, in the heat of the moment, you don't want to say something that you didn't even mean." 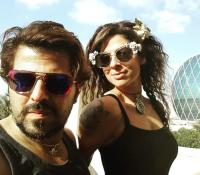 True that, Tannaz! Guys, how deep is your love? Keep us posted!