Like the year 2017, 2018 is the year which is also going to witness a number of celeb weddings in a grand way. After we last saw the lavish wedding affair of Virat Kohli and Anushka Sharma, another couple who is all set to tie their nuptial knot in Europe, is none other than Ex-Bigg Boss contestants, Ashmit Patel and Maheck Chahal. 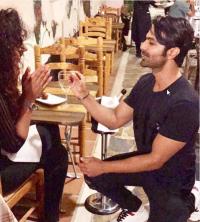 Jai Ho actor Ashmit got engaged to his girlfriend Maheck from Kavach…Kalli Shaktiyon Se serial in the most romantic manner in Spain in September 2017. As per reports, the much-in-love couple will be tying the knot in August this year. Sharing their wedding plans, recently, in an interview with a leading tabloid, Maheck was quoted as saying, “It will be a destination wedding. I am born and raised in Norway, so my whole family is in Europe. Ashmit’s family is in Europe. Our wedding will take place in the second half of this year. We are yet to zero down on the date.” Being inspired by Anushka-Virat destination wedding, being friends for 12 years, Maheck remarked, “Even Anushka had a small, intimate wedding. Everyone is doing that. It makes more sense. We will have a small intimate wedding attended by family and close friends. I don’t want to get all worked up in my wedding. It makes sense to have a small wedding and go for a grand honeymoon.” 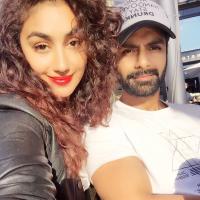 In one of the earlier interviews, when asked to Ashmit about wedding plans, he retorted, “Maheck wants a traditional gurudwara ceremony with pheras, which we will arrange for in Europe, followed by a winter reception in Mumbai.” The couple has been renovating their house before marriage as they didn’t want the marriage to hamper before their house is ready. Maheck said, “People get married and then renovate their houses. We are doing it the other way around. We want to spend money in our house because we are going to live there.” As per reports, the soon-to-be-married couple took their time off from their professional commitments and the lovebirds headed off to Sri Lanka to enjoy some of their pre-nuptial honeymoon phase. How cool is that to have a vacation like a honeymoon just before marriage for a great bonding, right?

For those who don’t know, this hot actress of the telly land and this handsome hunk of B-town didn’t click each other in the famous reality show Bigg Boss because they participated in different seasons. While Ashmit was seen in the fourth season, Maheck participated in the fifth season. Meant to be together, this cutesy couple participated in another reality show, Power Couple where the love blossomed between the two and then, the love story began. When asked to the actor about their love story, he was quoted as saying, “We have known each other for 12 years as friends and would meet at parties and at common friends’ get-togethers. Later, we worked out at the same gym in Bandra and would often work out together. Then one day it was raining. She didn’t have her car and I offered to drop her home. We stopped for bhutta at Carter Road and spoke for hours, from evening into the night. That’s when we discovered that we had something special. Power Couple helped us to strengthen our relationship. It showed us where we stand and made us realise that we can’t do without each other. Today, we are very sure of each other and our love.”

Looks like the couple wedding is also going to be a large grand ceremony in a close-knit family affair like Virat-Anushka in Europe!