From Shweta Bachchan Nanda performing rituals, Karisma Kapoor dancing her heart out, chooda ceremony of the bride to candid family shots, here are the unseen pictures from #AnissaMaanGayi wedding. 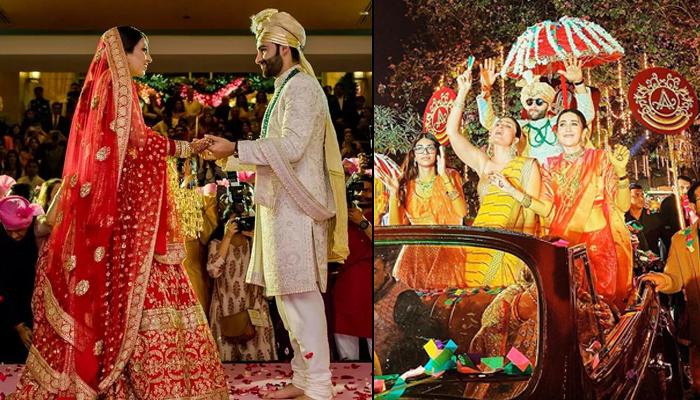 2020 began with a bang and marking the first celebrity wedding of the year, Armaan Jain and Anissa Malhotra tied the knot on February 3, 2020. When you belong to the first family of Bollywood, your dream wedding has no limits! The #AnissaMaanGayi wedding craziness has been all over our social media timelines for the past few days. And no, we aren’t complaining!? Keeping in mind that we are talking about Raj Kapoor's grandson and Karisma Kapoor and Kareena Kapoor Khan's cousin brother, Armaan's wedding, it was nothing less than extravagant. (Also Read: Akash-Shloka, Shah Rukh-Gauri, Malaika-Arjun And Many More Sizzle At Armaan Jain's Wedding Reception)

It all started with an intimate mehendi ceremony for just the close family and friends which was followed by a grand function the next day, for everyone. Then finally on February 3, 2020, ‘Heeriye Sehera Baandh Ke Main Toh Aaya Re, Doli Baaraat Bhi Saath Me Main Toh Laaya Re’ moment came into Armaan Jain’s life as he got hitched to his childhood sweetheart, Anissa Malhotra at The St. Regis, Mumbai. It was dulhe raja’s star sisters, Kareena Kapoor Khan and Karisma Kapoor, who had led the baraat as Armaan drove in a vintage car adorned with flowers to take his dulhaniya home.

For the wedding, Armaan Jain had looked suave in a classic ivory sherwani embellished with silver work, which he had accessorised with an emerald necklace and a golden safa. His bride, Anissa Malhotra had skipped our heartbeat for a moment with her first look in a traditional red and golden lehenga. Anissa had accentuated her lehenga with a large layered golden rani haar with a gold and diamond choker, matching maang teeka and jhumkas. To welcome his wife, Anissa in the family and expressing his excitement to begin their journey as Mr and Mrs Jain, Armaan had written with their official wedding picture, “Finally #anissamaangayi! Welcome Mrs. Jain!! We both are so excited to begin our life together as husband and wife and want to thank everyone for all their love and blessings.... A big shout out to my incredible wedding management team @mtom_insta_stories @aartimanocha And thank you @sam_and_ekta for capturing this beautiful moment!”

Other than the bride and groom, every Jain-Kapoor member had made us swoon over the big-fat Punjabi wedding and #AnissaMaanGayi had everyone’s attention. But it was the youngest member of the family, Taimur Ali Khan, who took our hearts away with his oodles of cute charm in a blue kurta by Raghavendra Rathore. From dancing at his mamu, Armaan Jain’s baraat while piggybacking on his father, Saif Ali Khan’s shoulders to his suave poses with mommy, Kareena Kapoor Khan, Taimur surely stole the show! From Shweta Bachchan Nanda performing rituals, Karisma Kapoor dancing her heart out, chooda and kalire ceremonies of the bride, Rima Jain applying haldi to her son, candid family shots of the Kapoor-Jain-Malhotra clan to the trendiest baraat of the season, here are the unseen pictures from #AnissaMaanGayi wedding that we couldn’t stop swooning on!

Just how grand #AnissaMaanGayi wedding was, equally awe-inspiring was Armaan Jain’s proposal to his childhood sweetheart, Anissa Malhotra. It was in mid-2019, when Armaan had got down on his knees and asked his ladylove, Anissa to marry him. Sharing his proposal video, Armaan had written, “Another replay of the best day of my life... Couldn’t ask for a purer moment with my life partner and best friend! @anissamalhotra. Thank you @kashyapmvyas @theweddingcrasherofficial for documenting this awesome video and leaving some impeccable photographic memories for all of us to cherish and once again thank you @aashstudio for making this possible!”

Ending July 2019 on a great note, Armaan Jain had announced that Anissa Malhotra had said ‘yes’ to his proposal and penning down his feelings, he had expressed, “The moment I eagerly waited for since the last 7 years finally arrived... the moment in my life where I felt the most nervous...when I think of my first school exam or my first shot in front of the camera it was nothing compared to the butterflies I had in my stomach when you walked in, every sensation went numb... Everything I rehearsed flew out of my mind...I finally realized what my yoga teacher said when he meant go blank and be in the moment... As I walked you, my most beautiful @anissamalhotra , down the aisle and went onto my knees, my heart was pounding, my mouth was dry, everything was hazy and I felt an inexplicable emotion like I did when I first met you...We’ve come a long way Jaan... fought all the odds come rain come storm (literally) Thank you for being my backbone, pillar of strength and sticking with me through thick and thin... YOU are the woman of my dreams and I am the luckiest man alive!”

Thanking their Cupid and his brother, Aadar Jain and everyone in the family for being a part of their journey, Armaan Jain had continued, “None of this would be possible without our generous parents, our adorable Cupid @aadarjain who introduced US and all our extended family i.e. our friends who were a part of yesterday and more importantly, an integral part of our beautiful journey in the last 7 years. My Armaan was to be with my Anissa forever and you said YES. I cannot wait to spend the rest of my life with you... Love you.” Anissa had commented on Armaan’s post that she is too, looking forward to spending the rest of her life with him, "I don't know how I got so lucky! Man of my dreams in every way. You are one of the purest people I know on this planet and I can't wait to spend the rest of my life with you! Thank you for the most INCREDIBLE proposal. Here's to forever for us!!!" (Also Read: Kareena Kapoor Khan Exudes 'Poo' Vibes Dancing On 'Bole Chudiyan' At Armaan And Anissa's Reception)

The Kapoor clan may not be royal, but they definitely define royalty! Post the grand proposal, the Jain and Malhotra family had hosted a roka ceremony of Armaan Jain and Anissa Malhotra and the Kapoors made sure to make it a memorable affair. Armaan had looked dapper in a white kurta-pyjama and had topped it with a white jacket. Anissa had made heads turn in a blush pink lehenga with subtle embellishments. She had kept her accessories to minimal, just like her makeup. In a simple yet classy way, Anissa had accentuated her look with her hair down in loose curls. Sharing a picture with his ladylove, Armaan had written, “Always laughing when I have you by my side @anissamalhotra. What a beautiful Parsi blessing for our engagement!”

In an interview with Hello! India, Armaan Jain and Anissa Malhotra had gotten candid about the proposal and their relationship. Speaking about the proposal, Armaan had remarked, “I promise you everything was a blur. I was a nervous wreck. My heart didn’t palpitate as hard even when I gave my first shot for celluloid.” Revealing who helped him in choosing the perfect ring for his ladylove, Anissa, Armaan had stated, “Initially, I kept asking her and her friends about her choice of diamond, but by the end of it I was just getting more confused. So, eventually, I went to mom and she helped me.”

Anissa Malhotra had spilt some beans on her relationship with Armaan Jain and how they have never broken up till date. Anissa had shared, “From the day we met, we never thought of dating anyone else. There were some small fights, and we used to get pissed at each other, but we have never broken up till date – not even for a day or a week. And that’s very important in a long-term relationship.” On her bond with her then soon-to-be mother-in-law, Rima Jain, Anissa had remarked, “Armaan’s mom is full of love. I’ve never met anyone who just envelops people with her warmth. During our wedding meetings, she has these crazy one liners that are insane. It has everyone in splits.”

In an interview with the Wedding Brigade, Anissa Malhotra had expressed her feelings on her beau, Armaan Jain’s proposal, “Every time someone asks me about Armaan’s proposal, I fall short of words because I genuinely could not have imagined something more perfect and more us. His dad’s office terrace has been in his family for the past 70 to 80 years which overlooks the sea and the Asiatic library. It’s a place that meant a lot to me. The decor was done by my best friend’s company Aash Studio along with Armaan. It was really incredible!”

Revealing the special element of the proposal, Anissa Malhotra had continued, “Armaan recreated the first time we met, it was when his brother Aadar introduced us at a restaurant in New York and the rest is history. He walked into a podium that had the restaurant’s name and we walked down an aisle together which had the lyrics of Frank Sinatra’s New York New York. It was perfect. I think of this moment and I almost have tears in my eyes. His brother Aadar, is the most important part of our relationship.”

How their wedding will be an amalgamation of cultures, Anissa Malhotra had then remarked, “It’s going to be a Sindhi, Punjabi, Parsi and Jain wedding! It’s truly an amalgamation of cultures and it’s lovely that everything is coming together and getting incorporated into our festivities. The pheras will be our traditional Hindu pheras, this is why we did the Parsi blessing beforehand. Our parents have been encouraging us to represent our cultures at the wedding because it brings so much to the table.” (Also Read: Gauri Khan Overshadows Shah Rukh Khan As They Groove On Saadi Gali At Armaan And Anissa's Reception)

We wish a very happy married life to Armaan and Anissa!