Anushka Sharma and Virat Kohli are spending the best days in South Africa with their little munchkin, Vamika. And they welcomed the new year with love, light, sparkles and gratitude!

Anushka Sharma and Virat Kohli are one of the most sought-after couples who have been together through thick and thin. Bollywood actress, Anushka Sharma had tied the knot with her longtime boyfriend and Indian cricket team skipper, Virat Kohli, on December 11, 2017. And since then, they have been living their best lives as husband and wife.

2021 had brought a new ray of happiness with the arrival of their daughter, Vamika. Anushka and Virat had stepped into another phase of their life after embracing parenthood. On February 1, 2021, Anushka Sharma had posted the first-ever family picture with their then-newborn daughter, introducing her to the world. Announcing her daughter's unique name, Anushka had written:

"We have lived together with love, presence and gratitude as a way of life but this little one, Vamika has taken it to a whole new level! Tears, laughter, worry, bliss - emotions that have been experienced in a span of minutes sometimes! Sleep is elusive but our hearts are SO full. Thanking you all for your wishes, prayers and good energy."

Also Read: Mira Kapoor Shares Her New Year Is Going To Be Great As 'Mr' Shahid Kapoor Clicks A Picture With Her 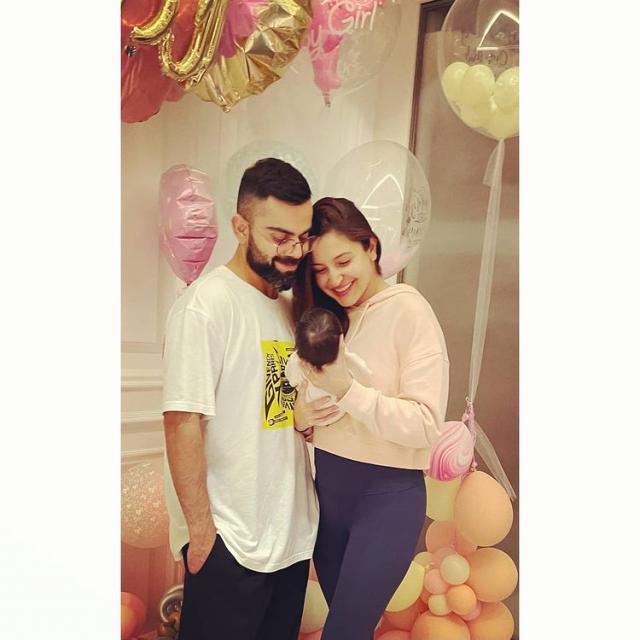 Anushka Sharma took to her IG stories to share a few glimpses from her New Year celebration. In the first story, she shared a snippet of the decor showing off '2022'. Atop of it, she wrote in the picture, "Almost here..."

In another video, the actress spanned her camera angle from one end to the other, giving a beautiful scenic glimpse of the lush greenery and a stunning lake. In the clip, we could hear Vamika mumbling, 'mum..mumma' and on top of it she wrote:

Virat Kohli and other Indian cricket team players and their wives enjoyed while welcoming 2022. Anushka took to her IG stories to share snippets from the party scenes. They all cut a 2022-themed cake and danced their way. Virat and Anushka looked gorgeous in their respective couture. While Virat donned a very casual look with a white t-shirt and jeans, Anushka looked stunning in a black and white striped dress.

Anushka took to her IG handle and shared a cute picture with hubby, Virat and expressed her gratitude towards 2021. She wrote in the caption:

"The year that got us the greatest happiness I've known. So, deepest gratitude 2021, thank you!"

On the other hand, Virat Kohli shared a few pictures from New Year's party with his wife, Anushka and his boys, the Indian cricket team. Alongside it, he penned down a beautiful note as a caption that can be read as:

"We hope everyone is blessed with joy and happiness this new year. We send you our love and positivity."

Don't Miss: New Bride, Katrina Kaif Shares A Glimpse Of Her Workout On The Last Day Of 2021, Radiates Glow