Anushka Sharma Reveals How Much She Enjoyed With Her Daughter, Vamika At Play Park

Bollywood actress, Anushka Sharma revealed her experience at the play park with her daughter, Vamika, and it seemed like she enjoyed the most. Check it out!

Bollywood actress, Anushka Sharma is a doting mommy to her little girl, Vamika Kohli Sharma. Ever since, Vamika's birth, the actress and her cricketer-husband, Virat Kohli have emphasised their wish for their daughter to lead a normal childhood and not become another celebrity kid for whom the media goes berserk. However, the duo often shares glimpses of their life with their baby girl.

A while ago, Anushka shared a cutesy IG story of her rented cycle. In the picture, we could see a baby seat on her bicycle. However, the highlight was the adorable nameplate of the cycle on which, Anushka's daughter, Vamika's name was written. Atop it, Anushka had penned a note, which could be read as:

"Will carry you through this world and the next and beyond my life." On September 11, 2022, Anushka took to her Instagram handle and posted a hilarious picture from the play park. In the picture, we can see the doting mommy enjoying a climbing pillar at the play park. She donned a cutesy casual ensemble with socks and sporty shoes. Along with it, Anushka penned a hilarious note, and it is every parent to be. She wrote: On Mother's Day, Anushka had shared an unseen glimpse with Vamika when she was a baby and her mother was watching over her. The picture had beautifully depicted the bond shared between the three generations of the Sharma family. Alongside it, Anushka had thanked her mommy for always being there, especially in the last years. She had written:

"Happy Mother’s Day Maa. Thank you for watching over me and being such a huge support for me especially in the last year and few months. Your will power and strength is phenomenal and you are so so loved by us all." 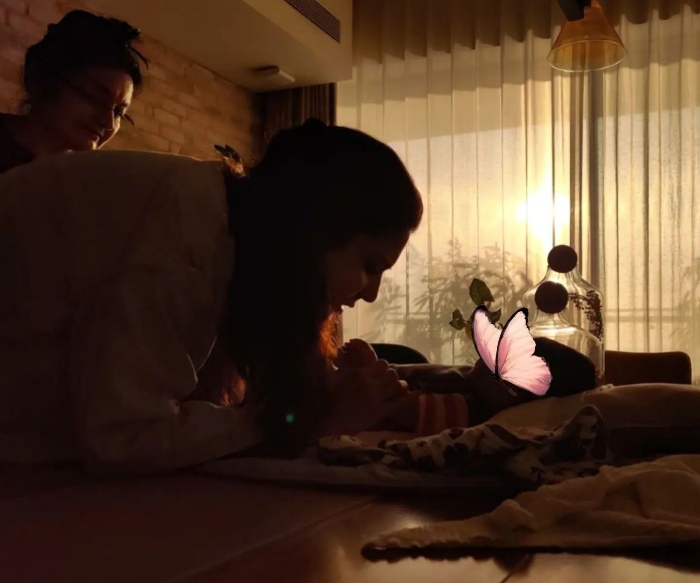 We love Anushka's cutesy note! What about you? No matter how much Bollywood actress, Anushka Sharma loves the world of acting, one thing she is sure is that she doesn't want her daughter, Vamika Sharma Kohli to be part of the media circle. In fact, time and again, Anushka Sharma and Virat Kohli had requested the media and paparazzi