During the commentary, legendary cricketer, Sunil Gavaskar took a jibe at Virat Kohli's wife, Anushka Sharma while commenting on his bad form, now, the actress has given a befitting reply to him. 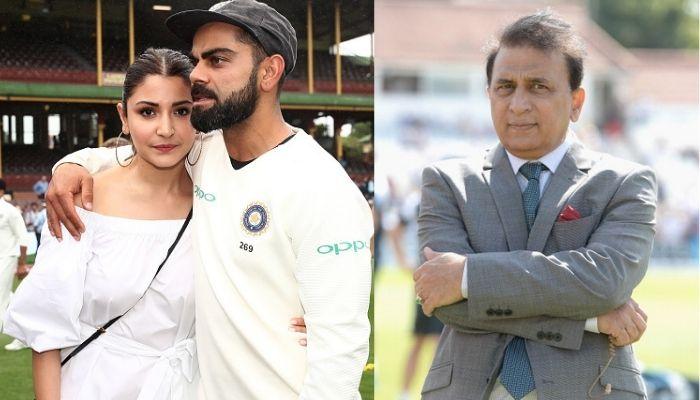 Anushka Sharma and Virat Kohli are riding high on happiness in their personal lives as the couple is soon going to become parents for the first time. As IPL 2020 has commenced, the cricket fanatics are going crazy and the 'Virushka' fans are loving how Anushka Sharma has been supporting her hubby, Virat Kohli during this season of IPL. Anushka has been a constant support for Virat Kohli and thus, has faced backlash from Virat’s fans for his poor performance numerous times. (Also Read: Teejay Sidhu's Daughters, Bella-Vienna Accompany Her And Daddy, Karanvir For Her Pregnancy Checkup)

Just when we thought that now Anushka will not have to deal with the trolling related to her husband’s profession, humanity hit another low, when former cricketer, Sunil Gavaskar took a jib at Anushka and Virat’s relationship. Virat led RCB lost their second match to Kings XI Punjab on September 24, 2020, and the skipper couldn't perform well as he had managed only one run after facing five bowls before getting out. During the commentary, legendary cricketer, Sunil Gavaskar took a jibe at Virat Kohli's wife, Anushka Sharma while commenting on his bad form, and now, the actress has given a befitting reply to him. Sunil Gavaskar’s unexpected and distasteful comment was enough to irk Anushka Sharma and now, she has shared her views on it. Anushka is known for her ‘on-your-face’ nature and she hardly minces her words. Expressing her disappointment in Sunil Gavaskar, she questioned him on why he dragged her into this when her husband, Virat Kohli wasn’t good at his game. She called dragging her name useless and gave a befitting reply. Her reply can be read as "That, Mr Gavaskar, your message is distasteful is a fact but I would love for you to explain why you thught of making such a sweeping statement on a wife accusing her for her husband's game? I'm sure over the years tou have respected the private lives of every cricketer while commentating on the game. Don't you think you should have equal amount of respect for me and us? I'm sure you can have many other words and sentences in your mind to use to comment on my husband's performance from last night or are your words only relevant if you use my name in the process? It's 2020 and things still don't change for me. When will I stop getting dragged into cricket and stop being used to pass sweeping statements? Respected Mr. Gavaskar, you are a legend whose name stands tall in this gentleman's game. Just wanted to tell you what I felt when I heard you say this." Check out her reply below: 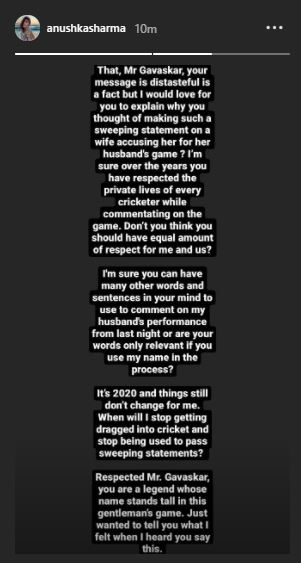 On September 25, owing to Virat Kohli’s poor performance in RCB vs KXIP’s match, Sunil Gavaskar had taken a dig at his lack of practice and had dragged his wife, Anushka Sharma's name in his statement. He had said, "Inhone lockdown me to bas Anushka ki gendon ki practice ki hai. (He has only practised on Anushka's balls during the lockdown)." He was referring to Anushka and Virat playing cricket on their terrace, the footage of which had gone viral during the lockdown. His double-meaning statement had not gone well not only with Anushka, but also with 'Virushka's' fans, as such a derogatory comment wasn't expected from a senior player, according to them. Sunil Gavaskar had faced a lot of backlash on Twitter after his unacceptable comment. (Recommended Read: Shoaib Ibrahim Plans A Surprise Dinner Date For Wife, Dipika Kakar For A Special Reason [Watch Now]) 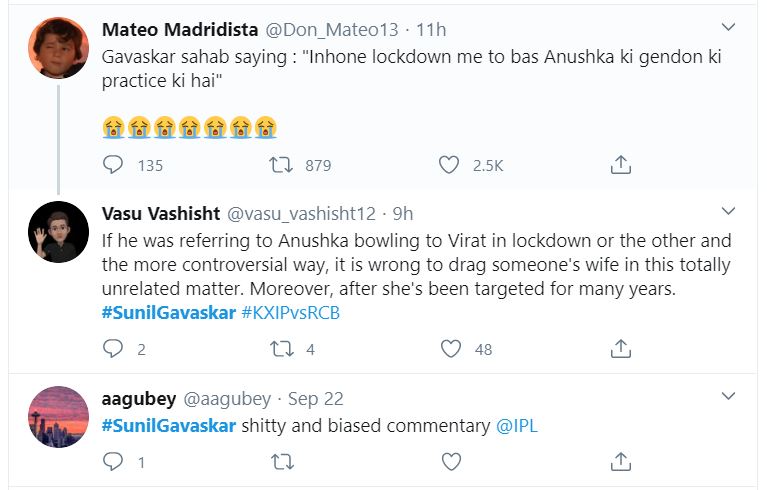 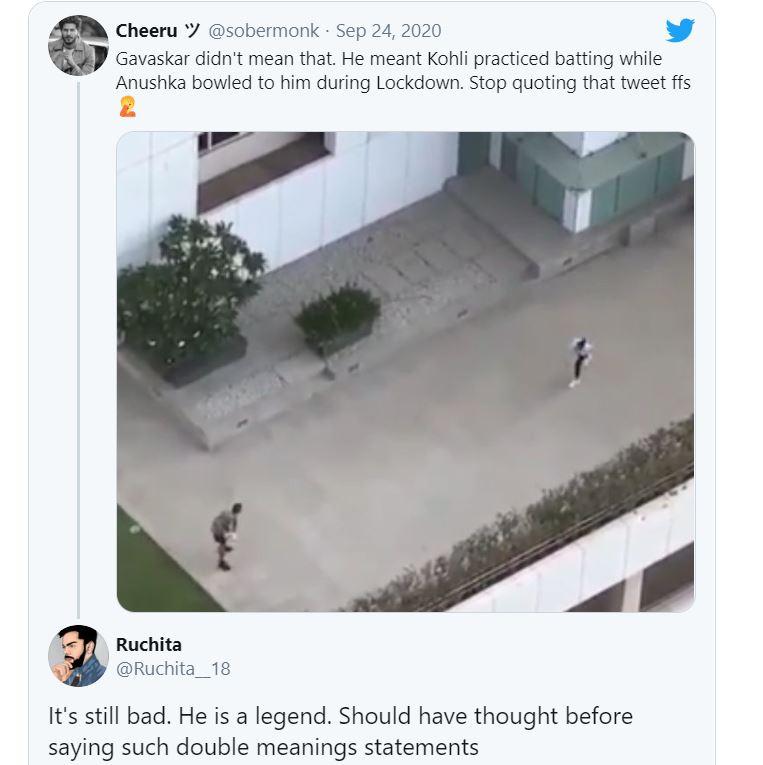 The controversial statement of Sunil Gavaskar was in reference to the video of Virat and Anushka playing cricket on their terrace during the lockdown, which had surfaced on the internet and had gone viral. Manav Manglani had shared that video of 'Virushka' which had seemed to be taken from a building diagonal to their house. In the video, we could see Anushka holding the bat, while Virat Kohli had turned bowler for his ladylove. The two could be seen having a fun practice session. But obviously, Virat and Anushka's fans are furious on Sunil Gavaskar's comment, and some are even demanding BCCI to remove him from the commentary.

Virat Kohli and Anushka Sharma are one of the most favourite celeb couples in India. Their amazing camaraderie and never-ending support for each other are sheer couple goals. On September 21, 2020, when RCB had registered their first win in IPL against SRH, Anushka Sharma had taken to her IG handle and posting a picture of the match-winning moment of RCB against SRH, had congratulated her husband for the fantastic win. She had written, "Winning start, RCB." (Don't Miss: Deepika, Kareena, Janhvi And Other Celebrities, Who Revealed Their Family WhatsApp Chat In Public) We are proud of Anushka Sharma for speaking her mind!