Anushka Sharma and Virat Kohli participated in a new #Takeabreak challenge in which, the couple gets to ask each other questions and see who knows whom better! 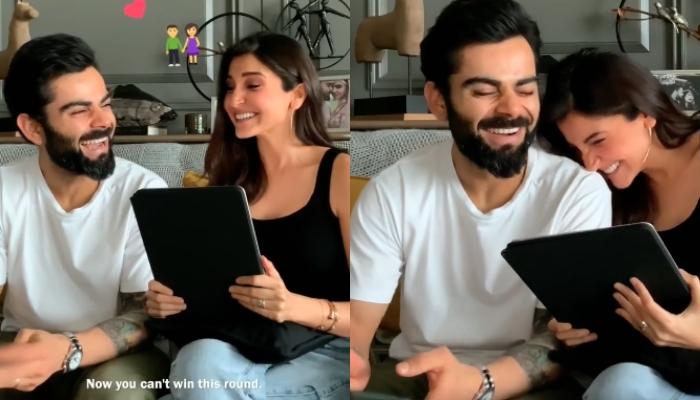 It had all started with a shampoo endorsement which had given this country its favourite celebrity couple! Virat Kohli and Anushka Sharma look every bit genuine and madly-in-love couple as they write in novels. Lovingly referred to as 'Virushka' by millions of their fans, Anushka and Virat never disappoint their fans by sharing lovely pictures and videos of them together. And the latest one will put a smile on your face! (Recommended Read: Kareena Kapoor Khan Looks Stunning In Hubby, Saif Ali Khan's Shirts, Lauds His Photography Skills)

Anushka Sharma and Virat Kohli took to their IG handles and participated in a new #Takeabreak challenge on Instagram. In the challenge, the couple gets to ask each other questions related to their personal and professional lives and see who knows whom better. Anushka gave an overview of the same and said, "When you have known each other for as many year as we have, you find a lot of funny and interesting things about one another." Virat then chipped in and said, "And today we'r gonna ask each other 3 sets of questions devided into three parts relating to our professions, our lives about each other and let's see who know who better." Scroll down to see the video!

The first question that Anushka asked Virat clean-bowled him right away as he had no clue about the answer. Anushka asked him, "What was the name of the first hindi feature film?" To which, with a very blank look on his face and Anushka laughing at his sheer cluelessness, Virat replied, "Come on. Umm, Mera Angan." Yes, even Anushka practically ROFLed on this answer and then when she told him the correct answer, which is Raja Harishchandra, Virat said, "I would never have guessed that." It was Virat's turn now, and he downright bowled a googly to Anushka's way by asking her three basic rules of cricket, to which, Anushka joked around a bit and said, "Number one, don't get out." The question on which Virat's reaction made all of us go aww was when Anushak asked him what makes her happy, and he said, "Being around animals." To which, Anushka replied, "That's true but it's you. You make me happy." Aren't they cute? Virat blushed at her answer and said, "That's so sweet." Check out the video below for a full dose of such goofy moments of Anushka and Virat! (Also Read: Bua, Soha Ali Khan Shares An Unrecognisable Picture With Sara Ali Khan To Wish Her On 25th Birthday)

Some days ago, Anushka Sharma had hosted a 'Q/A' session with her fans on her IG handle. She had posted a question sticker on her IG stories which had said, "I've had a lot of carbs & buzzing with energy. Ask me an interesting Q?" One user had asked a very interesting and funny question, and Anushka's big revelation was a jackpot for cricket lovers. The question was, "What's that one thing you would do irritate/annoy virat?" Anushka answered, "If I beat him in any board game. He hates loosing in anything." Another fan had asked, "Ab Virat ki help loge?" To which, Anushka had replied, "Haan tight bottles kholne mein aur heavy chairs uthane mein madad lungi." Take a look at the screengrabs of the questions-answers below.

Further in the session, one user had asked a question from Anushka that the whole world wants to know the answer to! The question was, "People around you keep asking you for kid?" To which, Anushka had reiterated, "No. No-one at all. Only social media pe." Another user had asked her the secret of a matured and stable relationship and Anushka had answered, "By not acting from a place of ego with each other." Another very sweet question was "What is the main aspect to make a relationship long-lasting? We love you guys (You and Virat)." Anushka had answered beautifully and had said, "Faith, knowing that love is acceptance, a good relationship is a commitment, a promise to be there for better or worse because through the ups and downs it allows the individuals the space and understanding to grow into their highest human potential." (Don't Miss: Kareena Kapoor Wishes Sara Ali Khan On 25th Birthday With A Throwback Photo With Abba, Saif Ali Khan)

Are you also planning to #Takeabreak with your partner? Don't forget to share the results with us!