Anushka Sharma and Virat Kohli are one couple on whom Indians swear by. Not that they are good-looking and celeb couple but they don’t leave any stones unturned to give the major couple and relationship goals. From the time they got married in a secret wedding in Tuscany, our love for them have increased by tenfold. 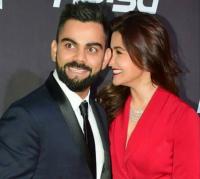 Indian cricketer, Virat Kohli is playing his first ODI against South Africa and what made India win against them was Virat’s 33rd century in the ODI. And the whole nation was cheering for the win by the greatest skipper. And with the whole nation, one person who was most awestruck by his performance was none other than his beautiful wife, Anushka Sharma. The dedicated wife, Anushka couldn’t miss out her hubby’s match even after her long day shoot for an ad and post that, she made it sure to watch it. Seeing her hubby adding one more century number to his kitty and winning the game, wife Anushka couldn’t keep calm and what She did next was another example of perfect couple goals. (Also Checkout: Shikhar Looking After Guests At His Saali's Wedding Is Why Every Girl Needs A Jiju In Her Life)

She took to her official Instagram handle and posted a story. Here is the screenshot of the story: 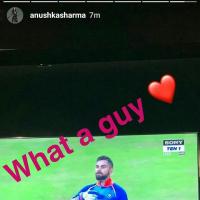 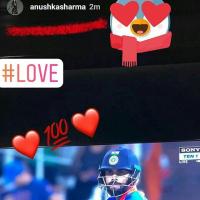 Isn’t it the cutest gesture we have seen lately? They both don’t leave any chance to showcase their love for each other even on the cricket ground. In an earlier match, around two weeks ago, when Virat's gesture for his wife took the internet by storm. When he bagged 150 runs, he took out his ring which he was wearing as a pendant around his neck and kissed it. This moment stole everyone’s heart and gave us another level of couple goals from them raising the bar of commitment towards a relationship. (You may also like: Huge Age Gap, A Broken Marriage, 2 Kids: Shikhar Dhawan Defined True Love As He Married Ayesha) 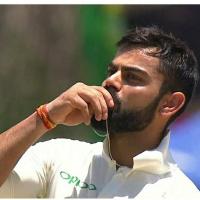 Earlier as per reports, the buzz was that the adorable couple might have to tie the knot again in India to get the legal marriage certificate as per the Indian laws. As they got married in Italy, this would be needed to register themselves as a married couple into the books of Indian laws. Well, we haven’t heard anything after that about their wedding in India again but we cannot wait to see the couple yet again in another beautiful Sabyasachi ensemble.

On the work front, Anushka will soon be seen in her upcoming film Pari. The movies is a paranormal thriller and guess what, the actress is the producer herself which created another buzz on the internet. Other than this, the PK actress will also be seen sharing the screen with Shah Rukh Khan in Aanand L Rai film Zero.

You both are truly made in heaven couple and we are always in awe of you both!

Next Read: B-Town Actress Preity Zinta Celebrates Her 'Longest Birthday Ever', With 'Pati' Gene In LA!