Anushka Sharma and Virat Kohli are set to welcome their first child anytime soon, a few hours back, the doting couple was snapped post their clinic visit. 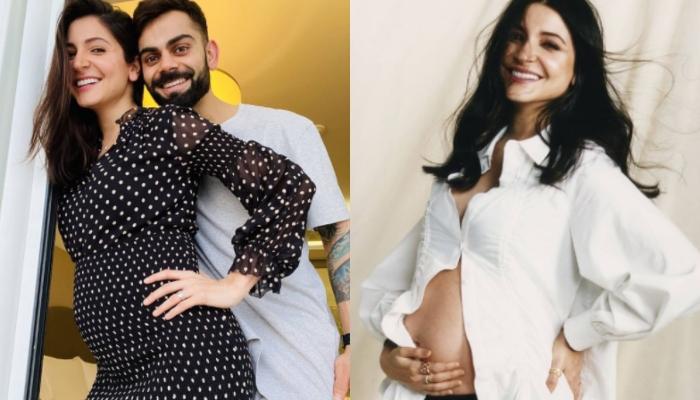 Pregnancy is undoubtedly the most amazing phase for a woman, which she cherishes throughout her life. And the last trimester is the best one as the expecting mother anxiously waits to hold her little one for the first time. Days left to start the unique journey of parenting; every couple wishes to enjoy the last days of their ‘us’ time. And Virat Kohli and Anushka Sharma are one of them as they are in their last trimester and can any time break the news of whether it is a baby girl or a baby boy. (Also Read: Samantha Akkineni's Hubby, Naga Chaitanya Trolls Her On Her Chat Show, 'Sam Jam', Their Fans Go Mad)

It was in August when Anushka Sharma and Virat Kohli had announced that in January 2021, they will be three and the couple had described the moment when they came to know about the pregnancy to be an ‘over the moon’ feeling. As the couple had welcomed 2021 by posting adorable monochrome pictures on January 1, the smiles on their faces depicted the sheer excitement of welcoming their little one soon as the due date is in January.

As Anushka Sharma and Virat Kohli are set to welcome their first child anytime soon, a few hours back, the doting couple was snapped post their clinic visit as the mommy-to-be went for a check-up accompanied by her hubby. Keeping a casual look, Anushka opted to wear an all-black dress with white sneakers. On the other hand, Virat chose a grey t-shirt paired with grey pants and jacket and was seen cutely escorting Anushka outside the clinic.

Anushka Sharma had posed for Vogue’s cover, the pictures of which were released on December 30, 2020, and just like all of us, her hubby, Virat Kohli was left in awe of his ‘beautiful’ wife. When Anushka had posted a picture, flaunting her baby bump and pregnancy glow, Virat had dropped a lovely comment for his wife, “Beautiful”. Anushka had captioned her post as “Capturing this for myself, for life!” For the interview with the Vogue, Anushka had spoken about directing a lot of her energy in preparing the animal-themed nursery and setting up the home for the baby. A self-confessed planner, Anushka had said, “I just want to be prepared. Everything is slower because of the times we are living in and I don’t like to rush things. This time in my life, even more so. I want the nursery to be very calm. It’s the place where you spend the most amount of time, where you are bonding with your baby, so it has to be peaceful.” (Also Read: Alia Bhatt Irritates Her Sister, Shaheen In The Unseen Childhood Photo Shared By Mom, Soni Razdan)

During the lockdown, Anushka Sharma and Virat Kohli had delighted their fans with glimpses of their quarantine time with their pooch, Dude. Ahead of her due date too, Anushka had given a glimpse of the same on her Instagram handle, in which she and Dude had become the ‘serial chillers’ of the house. Pregnant Anushka had rested on the floor with her pet sleeping next to her and she had lovingly caressed Dude with her hand on its head. Anushka had captioned the picture as “Serial chillers in the house.”

In an interview to RCB Bold Diaries, on the YouTube channel of the IPL team, Royal Challengers Bangalore, Virat Kohli had revealed his and Anushka Sharma's reaction when they had found out about her pregnancy and his emotions on becoming a father soon. Virat had expressed, "It is an incredible feeling. It puts things into perspective for you. It is a beautiful feeling. It isn't easy to describe how you feel, but when we found it, we were over the moon. When we announced, the kind of love that was showered on us, it was amazing. People were genuinely so emotional and happy for us. We are looking forward to the third member joining the clan." (Also Read: Guru Randhawa Sparks His Engagement Rumours With A Mystery Girl, Says 'New Year, New Beginnings')

Well, we can’t wait for Anushka and Virat to announce the much-awaited news of their baby’s arrival? Are you excited too? Let us know.