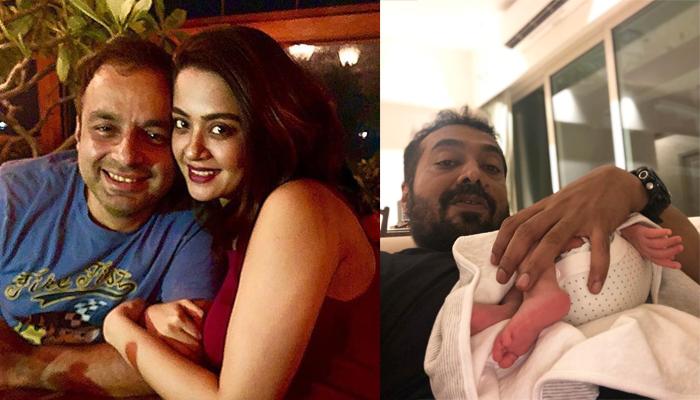 Celeb babies are reigning the Tinseltown like how and let us all admit that this whole ‘celeb babies and our obsession over their social media pictures’ binary started off with Taimur Ali Khan. Ever since, Taimur has become a sensation, we can’t help but get swayed by any news related to any celeb baby. Many of our favourite celebrities have recently embraced motherhood- Neha Dhupia, Sania Mirza, Rukmini Sahay, to name a few. The latest addition in this list is the 34-year-old Parched actress, Surveen Chawla. (Don't Miss: Parth Samthaan Writes Emotional Tribute For His Late Dad, Remembers The Last Time He Saw Him Smiling)

Surveen Chawla and her hubby, Akshay Thakker embraced parenthood on April 15, 2019, when Surveen delivered her first baby, a girl whom they have lovingly named, Eva. 4 days, later, on April 19, 2019, Surveen Chawla was discharged from the hospital and the couple brought little Eva home. Surveen Chawla took to her Instagram handle to share the first glimpse of Eva and beautifully captioned it, “We now have her tiny feet to fill the tiny shoes! Blessed by her wonderful arrival in our little family! Welcoming our daughter Eva.”

We all know that post the birth of a baby in India, there are a lot of rituals to be done like naamakaran. However, the one thing which is a Western concept is giving a baby, his/her Godfather. For those who do not know, Godfather historically means an assigned guardian of a child who will be responsible for his/her religious education after the child is baptised. However, over the years its meaning has changed culturally and today, a Godfather is mostly associated with someone who will be an intellectual guardian for a child. And guess what? Surveen Chawla and Akshay Thakker have assigned Anurag Kashyap as Eva’s Godfather! Anurag, who has previously worked with Surveen in his film, Ugly, took to Instagram to share the following picture and wrote, “Eva and her Godfather @surveenchawla @akshaythakker.” Surveen Chawla commented on Anurag Kashyap’s post and simply wrote, “Rightfully @anuragkashyap10” followed by flying hearts emoji. Take a look:

Earlier, on March 06, 2019, it was Surveen Chawla’s godh bharai, and the Kahin To Hoga actress had shared the following pictures from the ceremony. Looking gorgeous in a traditional saree, she had captioned them as, “The Godh Bharai for the little angel... A very very very special and big thank u to the following wonderful people for putting this memorable evening together.” (Suggested Read: 'Ishqbaaz' Fame, Navina Bole Sprains Her Ankle In The 9th Month Of Her Pregnancy)

In an interview earlier, Surveen Chawla had shared that the feeling of motherhood for her grows with a slow and gradual process and can’t be born out of anywhere. She was quoted as saying, "Honestly, initially, the fear of change engulfed me, but later, the beauty of it all started sinking in. Now, I feel like I am embarking on a new journey and adventure of sorts. I don’t know how many women will tell you the truth, but the reality is that motherhood is a slow, gradual process. Motherly instincts are not born out of nowhere. Motherhood, to me, is a feeling that grows on you, with the growing life inside you. I think just the fact that women are designed to grow a whole being inside them is a far more superior feeling."

Surveen also opened up about her work-plans post-pregnancy and had revealed, “Why should this question of whether an actress will continue to work or get interesting projects after marriage or motherhood be a point of discussion? I think we, as a society, should stop making a big deal about a woman becoming a mother, and of it having any adverse impact on her work or career. The day this question is asked to a man who embraces fatherhood, I will answer this one elaborately.”

Surveen Chawla, in another interview, had spoken reverently of her husband, Akshay Thakker and went on to say that he is the best thing that ever happened to her. She had revealed, “Both of us have been supporting each other in different ways. He is the best thing that has ever happened to me. He is absolutely wonderful and he is one of those who without saying, jumps on to taking responsibilities. There's nothing more, that I could have asked for. There is pampering, he takes my mood swings and he is just the most amazing to-be-dad.” (You May Like: 'Daayan' Star Priyaa Bathija's Second Marriage With DJ Kawaljeet Saluja Has Hit The Rock Bottom?)

Well, we are so glad on learning that Anurag Kashyap is Surveen Chawla’s baby girl, Eva’s Godfather. Congratulations Anurag!