Mukesh Ambani and Nita Ambani's 'modern home with an Indian heart' is all decked up for the Ganesh Chaturthi celebrations scheduled for 8 pm today at Antilia. Scroll down to see the preparations.

Ae Vighnaharta Ae Bappa Vighnaharta, Sahastra Bhakt Jan Ka, Tu Ek Karta Dharta, Hai Dwesh Mukt Mann Who, Tu Jisme Vaas Karta, Isi Liye To Sabse Pehle, Bhole Bappa Morya Re… Finally, the day of celebrations is here and to bring home Lord Ganesha with a smiling face, immersed in colours in the roaring beats of dhol! It is that time when the moment you say, “Ganpati Bappa”, it will get instant response of “Morya” from every corner of the nation, especially Maharashtra! The preparations have begun in full swing as some newly-married celeb couples are all set to bring Bappa home with their spouses besides them. (Also Read: Anant Ambani Attends Radhika Merchant's Family Function, Complement Each Other In Traditional Wears)

Even in the Ambani household, Ganesh Chaturthi 2019 holds a special significance as it is the first for the newly-married couples, Isha Ambani Piramal-Anand Piramal and Akash Ambani-Shloka Mehta. And when it comes to celebrations, be it a wedding or any festival, no one in Mumbai can match up to the grandeur of the Ambanis. Since this Ganesh Chaturthi is the first one for the new additions in the Ambani clan, we expect it to be magnificent and of course, star-studded! 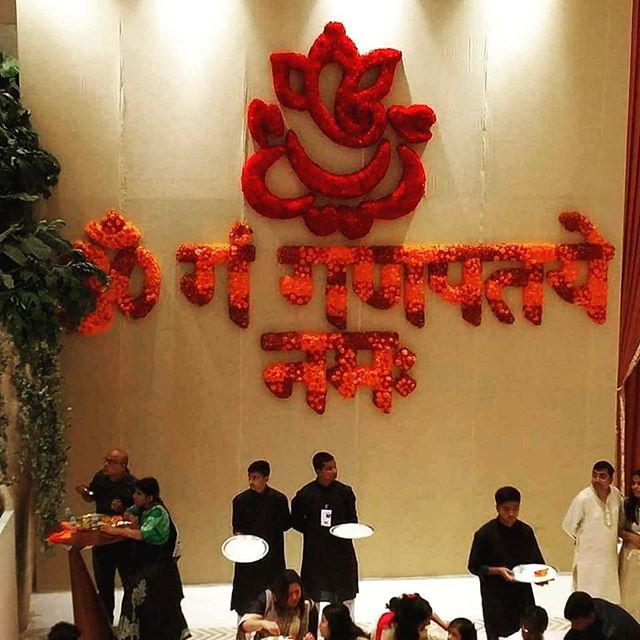 And to prove the maestoso Ganesh Chaturthi celebrations at the Ambani household, we have a glimpse of the decorations that had put a chaar chaand to the Altamount Road in Mumbai. Mukesh Ambani and Nita Ambani’s 'modern home with an Indian heart' is all decked up for the Ganesh Chaturthi celebrations scheduled for 8 pm today at Antilia. With phoolon ki ladiyan, ‘om’ and ‘swastika’ hanging along with the string lights, Antilia is all set to welcome Ganpati with fervour and lots of love!

A few days back, a thoughtfully curated invitation card sent by the Ambanis for the Ganesh Chaturthi celebrations on September 2, 2019, had gone viral on social media. The invitation card was rectangular in shape, soaked in pastel shades of green and orange, with a floral effect, setting the festive and spiritual mood just right! The card had Lord Ganesha sitting in a temple, with birds chirping to transport us into a spiritual world. The card had revealed that the celebrations will start from 8 pm, witnessing aarti at around 9 pm, followed by dinner. And the dress code for the celebration is Indian festive. For Ganesh Chaturthi celebrations at Antilia last year in 2018, a king-sized Ganpati idol was seated on a throne, placed on a mandap and decked with flowers. Two unseen throwback pictures of Shloka Mehta from the same, making the most of the celebrations with the Ambani clan had gone viral on social media. In one picture, the then-soon-to-be Ambani bahu, Shloka could be seen dancing with her hone wali saas, Nita Ambani. In another picture, Shloka was seen dressed in her ethnic best, giving major festive fashion goals with Kokilaben Ambani and Anant Ambani in the frame. (Also Read: Shloka Mehta And Radhika Merchant Bonding Together Gives A Glimpse Of Their Jethani-Devrani Relation) 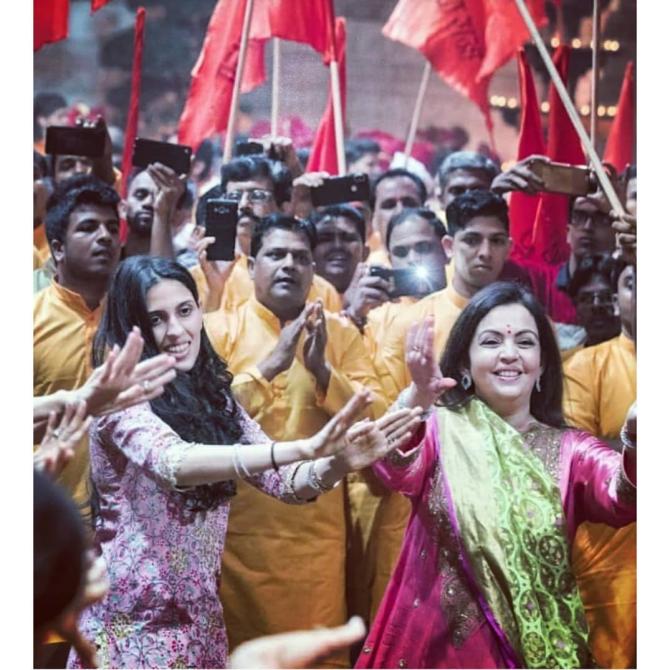 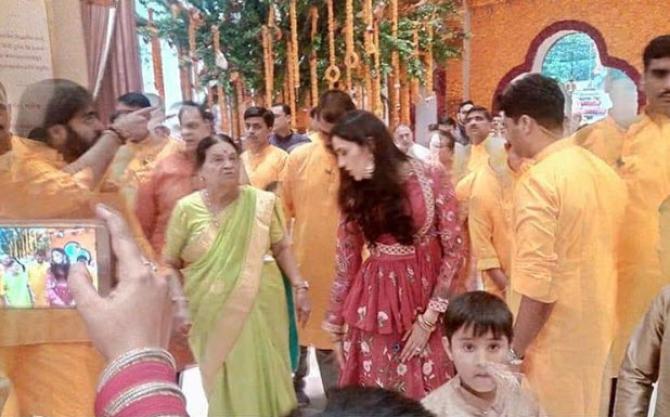 Nita Ambani and Mukesh Ambani were spotted at a medical textbook launch of ‘Restoration, Reconstruction and Rehabilitation in Head and Neck Cancer’, hosted by Dr Vijay Haribhakti on August 31, 2019. Nita and Mukesh are close family friends of Dr Vijay and to mark to occasion, the former had said, “I recently read ‘A Journey Forever’ and what I figured out was Vijay is as good with his pen as he is with his scalpel. ‘A Journey Forever’ is an extension of your own personality, Vijay, of gratitude and service, the very philosophy that guided you to the pinnacle glory of your profession. It holds within itself an intense and profound message, the secret to living a fulfilling life.”

Nita Ambani was quoted as saying, “While the world knows Vijay as Dr Haribhakti, for both Mukesh and me, our relationship with Vijay and his family is special, deep and layered just like his books. Vijay’s book, ‘Restoration, Reconstruction and Rehabilitation in Head and Neck Cancer’ is the first book of its kind, a book like this has never been written in our country although India has the highest percentage of head and neck cancers in the world. This book in its truest sense is Vijay’s legacy to the world.” (Also Read: Nita Ambani Is The Most Loving Mother-In-Law To Shloka Mehta And Anand Piramal, Here Are The Proofs)

Stay tuned with us for pictures of the Ganesh Chaturthi celebrations at Antilia!