Ankita Lokhande Flaunting A Ring, Sparks Off Rumours Of Her Engagement With Boyfriend, Vicky Jain

Ankita Lokhande Flaunting A Ring, Sparks Off Rumours Of Her Engagement With Boyfriend, Vicky Jain

Ankita Lokhande is in a steady relationship with businessman, Vicky Jain. Recent pictures of the actress sparked off rumours of her secret engagement. Deets Inside! 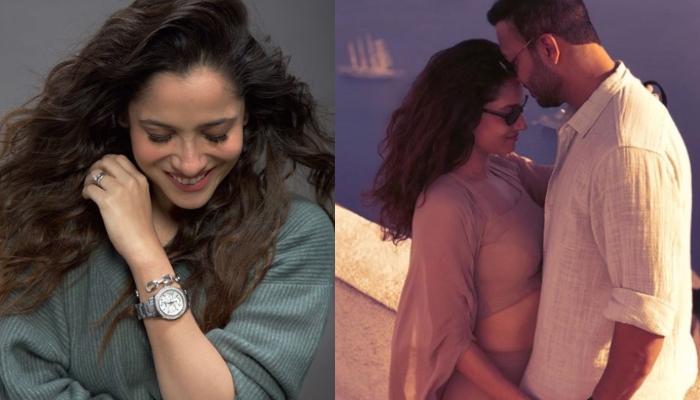 Falling in love is definitely the best thing, but more than that, falling for the right person makes the relationship more meaningful. Having someone, who bears all your tantrums, makes you feel special at your lowest, and always stands with you like a pillar of strength, are some of the qualities a woman always look in her man. And when she finally meets her Mr Perfect, all she dreams is spending her entire life with him. Television’s most popular face, Ankita Lokhande is one of the few lucky girls, who had met her knight in shining armour in businessman, Vicky Jain. (Also Read: Soha Ali Khan Shares Beach Pictures With Kunal And Inaaya, Reminisces About Good Old Days)

Ankita Lokhande rose to fame with her stint in the popular serial, Pavitra Rishta and was riding high in her professional life. Her chemistry with co-actor, Sushant Singh Rajput was not only a hit on-screen but their happy off-screen love too, was adored by their fans. Little did she know that their six-year-old relationship would come to an end and the lovely couple had parted their ways in 2016. Soon, after, Sushant and Ankita had moved on in their lives and Ankita had found love in the arms of a businessman, Vicky Jain.

Ankita Lokhande and Vicky Jain’s engagement rumours have been doing rounds for quite some time. And her recent pictures added more fuel to the fire. Ankita, who is an active social media user, loves posting pictures of herself and in her recent pictures, the gorgeous actress was seen flaunting a ring on her finger raising many eyebrows. Now, all her fans are eager to know whether the actress had a secret engagement with beau, Vicky during the lockdown!

Ankita Lokhande had found love in the co-owner of the Mumbai team of the Box Cricket League, Vicky Jain, whom she had met through common friends. Ankita and Vicky had eventually become friends and had started hanging out with each other. In a Bombay Times interview, Ankita Lokhande had confessed that she and Vicky Jain are very much in love but there are no plans to get married anytime soon. Ankita had stated, "Love is really important for me because I believe in it. I believe in giving love to everyone, including my family, dogs and myself, and not just the person I get married to. Relationships are very important because that's the bond you share with someone and that's how love grows between people. Marriage has always been my dream. I have always wanted to get married. But at this point, my priorities have changed. I am really looking forward to more films." (Also Read: Anurag Kashyap Tries To Copy 19-Year-Old Daughter, Aaliyah's Dance Steps, Leaves Her Laughing Hard)

During the lockdown, Ankita was missing her beau, Vicky and On April 3, 2020, she had taken to her Instagram handle and had shared pictures of her good times spent with Vicky. In the pictures, we could see Vicky and Ankita posing for the lens while teasing each other. Along with the pictures, Ankita had written, "The best things in life are not things, They are moments.. @jainvick #majormissing".

It was on July 2, 2019, when the actress had finally made her relationship official on her Instagram handle. Ankita had taken to IG handle and had shared a series of pictures, wherein, Vicky could be seen proposing her. The actress had captioned the pictures as "I will think about it", followed by heart emoji.

Last year on August 1, 2019, Ankita Lokhande had given a sneak peek into her relationship journey with Vicky Jain and had posted some unseen gems to wish her beau on his birthday. Making Mr Jain’s birthday super-special and hoping to make his everyday ‘very special’, Ankita had written, "Happy birthday to you Mr.jain, wish to make your today and every day of your life very special. Truly yours and only yours #happybirthdayvikki @jainvick." (Also Read: Chiranjeevi Sarja's Pregnant Wife, Meghana Raj Hugs Hubby For The Last Time In This Painful Video)

Well, we are eagerly waiting for Ankita to confirm the news.