Ankita Bhargava shared a family picture from Mehr's first-ever trip to the Maldives. The baby girl's smile and pose took away all the limelight! 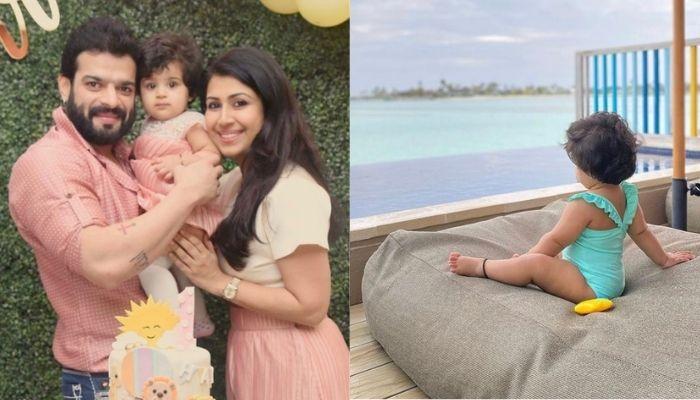 Family vacations are one of the most underestimated feelings. In the fast-paced world that we are living in, we often end up neglecting our family or have the least time for them. Thus, it makes it important for every family to at least have one trip together so that they can rebuild their bond and have some fun time together. Karan Patel and Ankita Bhargava are also developing this routine as they were out on a vacation to the Maldives with their little doll, Mehr Patel. (Also Read: Ishita Dutta's Husband, Vatsal Sheth Helps Her With Kite Flying On The Occasion Of Makar Sakranti)

It was on January 8, 2021, when Ankita Bhargava and her little family had jetted off to the Maldives for a small vacation. She had taken to her IG handle and had shared a super cute family picture as they were all set for their first vacation. In the picture, we could see Ankita holding her baby girl, Mehr in her arms, wearing a mask, while her hubby, Karan was dressed in a casual black ensemble. Alongside the picture, Ankita had written, "Mehr's first trip ever, this had to be done. 2021 I love you already." Now, the family of three has returned from their mini-vacation and Ankita shared an adorable photo.

Taking to her IG handle on January 14, 2021, Ankita shared a family photo from their trip. In the picture, we can see the family of three standing on the bridge made in between the sea, with the beautiful backdrop of sky and water. While Karan can be seen wearing a ganji and shorts leaning his head on his wife's head, on the other hand, Ankita can be seen resting her head on Karan’s shoulder and holding him. As Karan and Ankita smiled for the camera, their little girl, Mehr, who was in a baby carrier can be seen happily smiling and posing for the picture. Along with the adorable picture, Ankita added a family emoticon as her caption.

On January 10, 2021, Ankita had shared another picture from their family vacation. She had taken to her IG handle and had shared a lovely picture of her baby girl from their vacation. Dressed in a cute cyan-coloured monokini, Mehr had looked adorable as she had posed for a candid click. Along with the picture, Ankita had revealed who is Mehr’s inspiration when it comes to posing. She had written, “The Posing?!? Well Well... She gets that from ‘ME’ Clearly #waterbaby #maldives #Rabbdimehr #firsttripever.” (Don't Miss: Divya Agarwal Enjoys A Guitar Session With Boyfriend, Varun Sood, Later Goes On An Ice Cream Date)

Ankita and Karan had embraced parenthood by welcoming a little angel into their lives, whom they have named, Mehr. It was on December 27, 2020, when Ankita had for the first time not covered her daughter, Mehr’s face with an emoticon and had shared a picture from her first birthday celebration. To wish New Year to her fans, Ankita had shared a complete family picture from Mehr’s first birthday revealing the baby girl’s face completely. Mehr had looked like an absolute stunner, twinning with her family in the shades of pink. Sharing the picture, Ankita had written, “Mehr Patel Wishes everyone the most amazing and well deserved year ahead!”

On January 1, 2021, Karan Patel had shared how his daughter, Mehr is a perfect blend of her mommy and daddy. Karan had given a pleasant surprise to his fans by sharing a collage with childhood pictures of him, Ankita and Mehr. In the picture, Mehr had looked like the exact replica of her star parents. A look at the picture and for once we had thought that the pictures belong to the same person only. However, Karan’s caption had cleared it for us that the picture is proof that Mehr is a perfect blend of Karan and Ankita. He had written, “Now that’s what i call a perfect 50/50. #RabDiMehr #PerfectBlendOfDaddyMommy." (Must Read: Mahesh Babu's Daughter, Sitara Dons A Saree To Wish Everyone On Makar Sankranti, Looks Adorable)

When a celebrity couple welcomes a little wonder into their lives, their fans go crazy to get a glimpse of the little one. They wish to know everything about them, from their first word to whom the baby resembles or their first crawl. This is the reason why the star